This article has been edited slightly from its original version to include the term “older adults.”

Discrimination based on age is rampant in our society, but it isn’t limited to older people. That was one of several messages shared during a virtual Oct. 3 lecture “What’s Age Got To Do With It?” co-sponsored by Cascadia Art Museum and Humanities Washington.

The speaker was Dori Gillam, who writes for 3rd Act Magazine, is a board chair for the Northwest Center for Creative Aging, and a charter member of Age Friendly Seattle. A 1970 graduate of Woodway High School, she also holds a bachelor of science degree in educational psychology.

In her lecture, Gillam pointed out that the practice of ageism is subtle. And a common place to find it, she said, is in birthday cards. Cards for older adults are frequently designed to be funny, she said, but they often hide a blatant, somewhat cruel, form of ageism. To illustrate the point, she shared the card below, which links age to failing bodily functions. 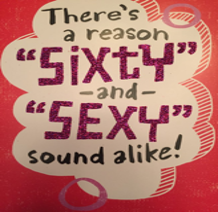 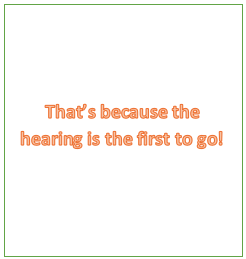 When you talk to older adults about aging, the topic that frequently surfaces is the fear of dying, but death is not discussed openly, said Gillam — who describes talk about death as the “new sex.”

In generations past, discussions about sex were a taboo topic. Now, we freely discuss sex but seldom have frank conversations about death.

Although the usual thought about ageism is that it is a prejudice directed toward the older adults, Gillam said it includes both the young and the old.

Millennials, on the other hand, are credited with “failure to launch.” Instead, they remain at home with their parents long past the time that the Baby Boomer generation did. Gillam remarked that when she attended college in the ‘70s, one could pay for tuition, room and board by working at a part-time job. Millennials, on the other hand, cannot begin to manage this feat due to the rising cost of college and expenses. Instead, it is not uncommon for them to graduate college many thousands of dollars in debt.

In both cases, the groups are being judged by standards that are not applicable to them. And both groups would like for society to stop saying these types of things about their respective generations, she said.

The one group that we all belong to is the one that is aging, Gilliam said, and this fact should unite us, rather than divide us.

A more positive approach to age and aging is to employ humor, and her advice is to face the challenges with laughter. A great big belly laugh is well-recognized as therapeutic. People who think positively about aging have been shown to live 7.5 years longer than those who find only its negative aspects.

And remember, she added, “Age is not a four-letter word.”