As readers of the Part 1 report could see, we could view much of the local beauty and changing weather from our windows and grounds. The cattle would come by on their rounds of the meadow. Magpies and other birds were aloft, and almost every morning one or two rabbits ran down the drive. We had been supplied with enough provisions, and when once again in Ireland, I remembered that I prefer tea.

Still we knew there was even more to see beyond our view.  In his report on the Dingle Peninsula (available via the downloadable Rick Steves Audio Europe app here), Rick Steves promised scenery and the signs of Ireland’s heritage — some thousands of years old. The Irish were frequently invaded but not fully colonized, and the saying was that the invaders “became more Irish than the Irish.” We already had seen a reminder of more recent history from our side yard, Mount Eagle (just over 500 meters), where American pilot Charles Lindbergh was believed to have begun to traverse Irish land en route to Paris. Irish mountains are not as mighty as even the Olympics, and national parks are usually former estates.

We started to walk to the town nearest to us — Ventry — and its beach, and even three miles over the spine of the peninsula to another town — Ballyferriter — presented us with a whole new set of views. Dingle required a cab ride since the usually serviceable national bus schedule was stringently pared back. Much of the town was shut down, but with nicer weather, there were quite a bunch of domestic tourists, many lining up to take a boat ride to see Fungie the dolphin (guaranteed or your fare is returned) but I settled for the dolphin’s statue. It was more relaxed to return to near Ventry.

Then for all but our last day, our son came to stay, with the ideal of a separate two-bedroom apartment attached. Our grandsons had more indoors space than in their Cork apartment (the family is now seeking a house) and they didn’t have to go to a playground for space to run and use soccer balls and frisbees outside. And with the aid of my son’s car, half of us at a time could roam farther. I gladly went around the peninsula three times, seeing views that were on a par with Big Sur, and stopping at ancient sites such as earthen ring forts, cliffside rock forts and nearby beehive huts, and culminating in the Gallarus oratory, built watertight without mortar in the 7th century with its signature upturned boat-hull shape.

But to me the highlight was a sidetrack to the Blasket Center, which honors the isolated people who lived on those offshore islands until 1954. The building is informative and impressive, but the views from its viewing platform shows not only the close-in Great Blasket Island,  but beyond that the ultimate isolation of the conical Skellig Michael, occupied by monks for over 400 years until about 1200 A.D. I’m beyond the point of trying to get there, but my son will — hopefully — after his two weather-thwarted attempts. I was among many non-fans of the recent Star Wars filming there, and the general outcry caused the next film to be shot on the mainland. But the locals will teach you how to say “May the Force be with you!” in Gaeilge. (Incidentally, two major Hollywood movies were filmed here, Tom Cruise’s Far and Away and the earlier Ryan’s Daughter.

These days of exploration were almost too rich with imagery and reflections to absorb, so we retreated our last few day to staying local, on the beach, and once again just gazing at the hills and sky. I can firmly assure that my wife Mary Ellen and I realize fully that being with our son’s family and just being in this mystical locale was the blessing of a lifetime and the final rainbow at our lane seemed to confirm that notion. 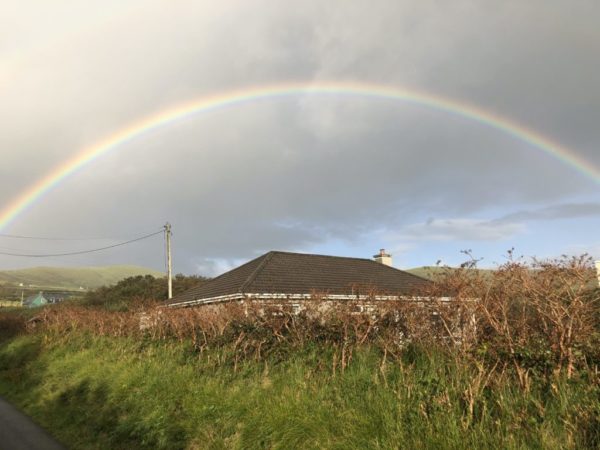 May the road rise up to meet all of you, and may you soon get to your special destinations,