Musician Marina Christopher had her 2020 all planned. In January, she was in New York City playing bass with a touring group. She had other stops scheduled and was ready to drop in at a favorite spot, Vito’s in Seattle, for another gig.

But, 2020 had other plans for the Mountlake Terrace-born-and-raised artist. She has not let the pandemic silence her music. And that is a blessing for the rest of us. Christopher and her soul and jazz band, Marina and the Dreamboats, are hosting a virtual performance Wednesday, Dec. 2 through the Northshore Performing Arts Center. (Keep reading, and we’ll tell you how to tune in.)

Christopher’s star is rising in Seattle’s jazz scene. Earshot Jazz magazine named her the Emerging Artist of 2017. The next year, she scored honorable mention in the Kobe-Seattle Jazz Vocalist contest. Christopher’s style is a little bit pop, a little bit rhythm and blues, with her unique take on the singing.

Also in 2018, she released her first album, all songs she wrote for Marina and the Dreamboats. Last year, the band won grand prize at the Hard Rock of Seattle Battle of the Bands.

“When I listen to Marina Christopher’s music, I’m reminded of Joni Mitchell’s pop-jazz fusion and other songwriters of the era like Billy Joel or Randy Newman. Songs are difficult to write, good songs doubly so.”
— Abe Beeson, KNKX Radio

Marina never set out to play the bass; she had started on trombone. Her brother played drums; Dad is a keyboard artist. But her dad suggested she switch, telling her that bands were “always searching for good bass player.” She picked up the instrument basically on her own: “Dad left me alone with a book of music and I think that was the right thing,” she said. At 11, she wasn’t tall enough to play an upright bass; she started on the five-string electric bass, which looks like a guitar.

By 17, she was an accomplished bassist and member of the Mountlake Terrace High Jazz Band. She got her degree from Central Washington University in classical double bass performance, then took off to see the world, playing in an orchestra on Royal Caribbean cruises ships. That’s when life threw a curve. Christopher was diagnosed with a tumor in her right arm. It is not cancer but attacks the connective tissue. She’s had many surgeries and MRIs over the last 11 years.

“I go through phases”, she said, thinking, “Oh, I can’t play music, I have to get a real job; or, I have to play bass ‘cause I don’t know how long I can play music.” She is hopeful most of the time, but admits some days are rough. “Right now,” she said, “I’m fine.”

She has become a master of the virtual gig; experimenting with her first one shortly after the virus hit in March. A musician friend told her “we gotta get on top of this” —  meaning online performances. Christopher has held live-streamed shows and has been on Twitch, which has a music site. Now this Wednesday, starting at 7 p.m., Marina and the Dreamboats will play on Facebook Live for the Northshore Performing Arts Center’s Mid-Week Mash-up. Her bandmates are Jerome Smith on trombone, Chris Patin on drums and Joey Walbaum on keys. 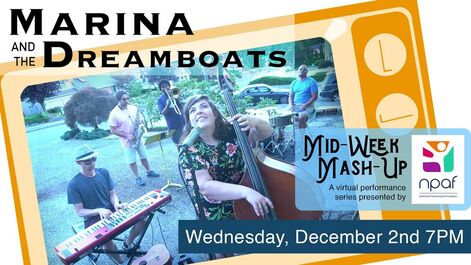 You can access the Dec. 2 performance at this link. If you like what you hear, listeners can donate to Northshore Performing Arts, or to the band.

Donate to Marina and the Dreamboats at paypal.me/marinachristopher.

The arts center and the band will split donations 50-50.

“A shining light for me is to do music,” Christopher said. “The thing that really drives me when I perform with other people is bringing it together and making something brand new in the moment that totally makes sense.”

This article is part of an ongoing series exploring the impact of coronavirus on the life, work and health of local residents. If you or someone you know has a story to tell, please email us at myedmondsnews@gmail.com.