There’s no getting around it. Our hopeful optimism that mid-summer’s dropping COVID numbers would signal an early end to the pandemic has fallen with the autumn leaves.

The holidays are now fast upon us, and the COVID Grinch is back with a vengeance as case numbers, deaths and hospitalizations surge and the virus picks up speed across the globe, breaking records daily.

Locally, Gov. Inslee announced Sunday the re-imposition of restrictions, putting the brakes on a range of activities from indoor dining to athletic club operations to group gatherings, and quashing many Thanksgiving plans. The new restrictions come as Washington sees daily case counts spiraling upward, with more than 2,000 cases each day over the weekend and average daily new cases in the state doubling over the past two weeks, as “home for the holidays” takes on an entirely new meaning. (Read the latest news and recommendations from Washington State Coronavirus Response here)

Beyond our borders, this week begins with the world closing in on 55 million total cases (up by 4 million from last week), with the U.S. now topping 11 million. That’s a disproportionate 20% of the world’s COVID cases in a nation that contains only 4.3% of the global population.

But hope is on the horizon as test results come in on two promising vaccines from Pfizer and Moderna. Both are showing effectiveness ratings of more than 90 percent, and according to CNN Dr. Anthony Fauci, Director of the National Institute of Allergy and Infectious Diseases, said Sunday that these could be available to the highest risk populations before the end of this year.  But if you’re not part of a high-risk group, don’t look to get vaccinated any time soon. Fauci added that general availability would not happen until later in 2021.

To help you, our readers, navigate this sea of information and sort this out for yourselves, here once again are the latest numbers, charts and statistics from the world to our own backyards.

This week’s global count is approaching 55 million cases, an increase of almost 4 million over the past seven days (see our earlier reports from Nov. 9 and  Nov. 2 for comparison).  The United States has surpassed the 11 million mark, as it continues to lead the world in sheer numbers of cases, up from just short of 10 million in last week’s report.  Worldwide deaths stand at more than 1.3 million, with the U.S. (now at more than 246,000 deaths) still comprising almost 20% of the global total.

The most recent tabular display of the top 12 nations from the World Health Organization shows similar numbers, the discrepancies due to the updates being taken in different time zones (WHO is based in Europe, and due to time differences the numbers are approximately 10 hours earlier than Johns Hopkins).  Note that “million case club” has now grown to 11 nations as Mexico and Italy surpass this sobering milestone. 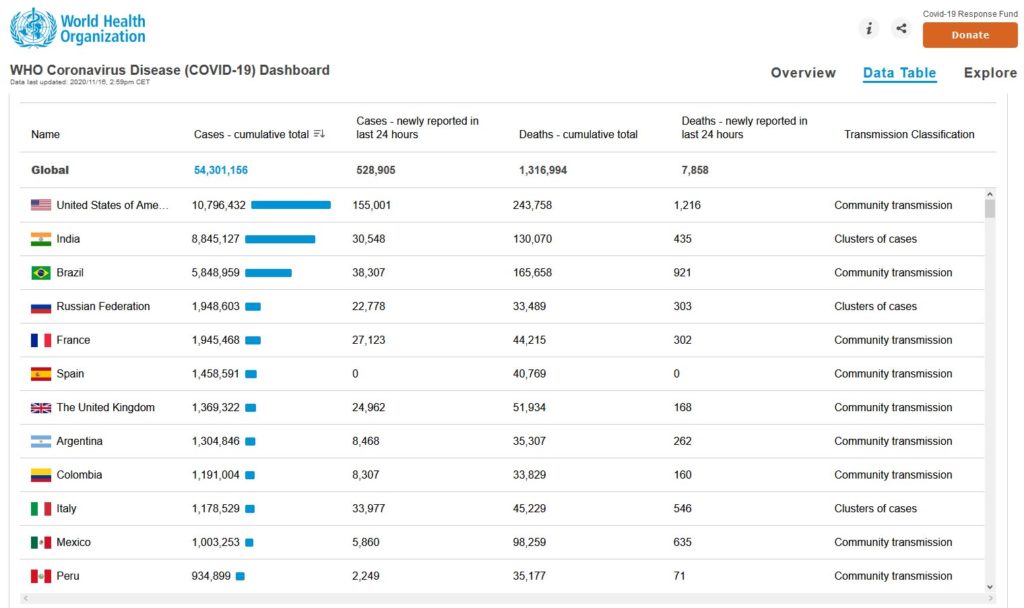 While the U.S. leads the world in overall case numbers, when the field is leveled to reflect cases per one million population the U.S. now stands in 14th place (16th last week). Note that all of these nations comprise much smaller samples, so while statistically these countries may show a higher per-capita rate, the small sample size makes comparisons with U.S. dubious at best.  See the complete interactive table where you can rank countries by any of the various metrics here. 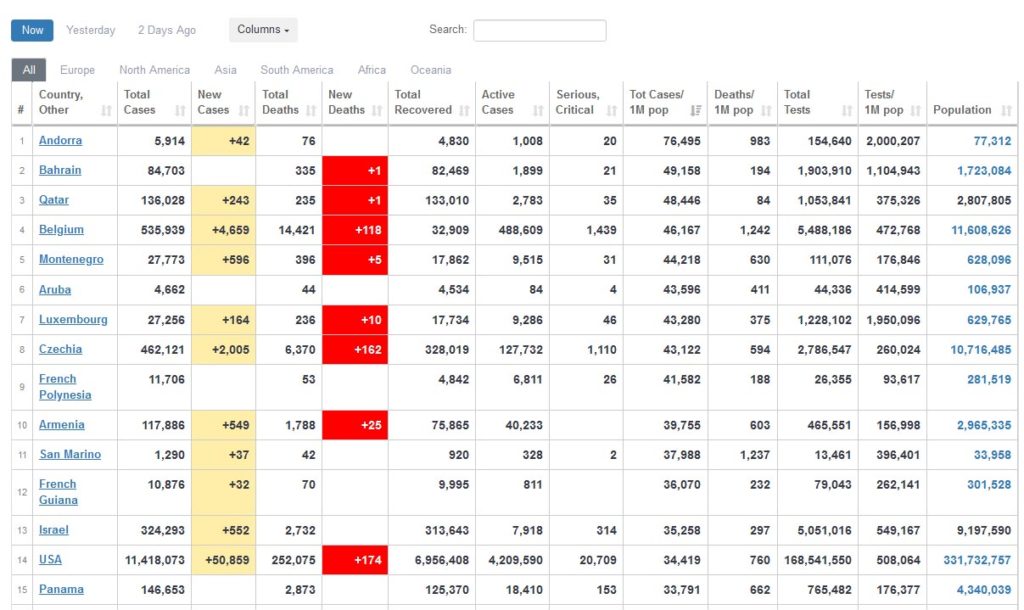 As reflected in the World Health Organization’s regional comparison below, the daily caseload counts hit new highs in the Americas this week, while Europe’s daily incremental increase backed off slightly.

The U.S. maintained its seventh place standing this week in COVID deaths per 100,000 population, while at the same time increasing to 75.26 COVID deaths per 100K compared to 72.61 last week and 70.60 the week before. (Mortality chart from Johns Hopkins University). 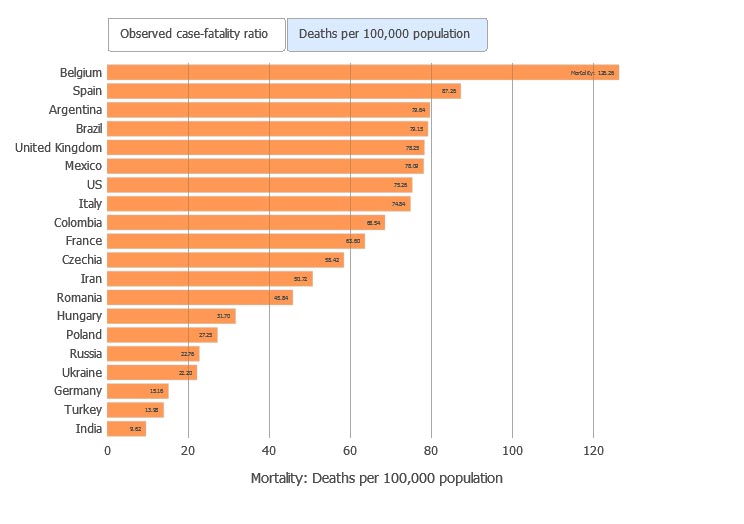 Our state continues to move into record-breaking territory, with the most recent (Nov. 14) state overview from the Washington Department of Health (DOH) showing confirmed cases at 130,040. That’s 12,709 new cases in the past seven days, setting a record-breaking average of more than 1,800 Washingtonians falling victim to the virus each day this week. Deaths have now reached 2,519, up from 2,439 a week ago. Testing activity shows 165,897 new tests administered, up from 143,052 last week. Note that according to the Snohomish Health District, “new cases” is defined as confirmed tests reported to public health. 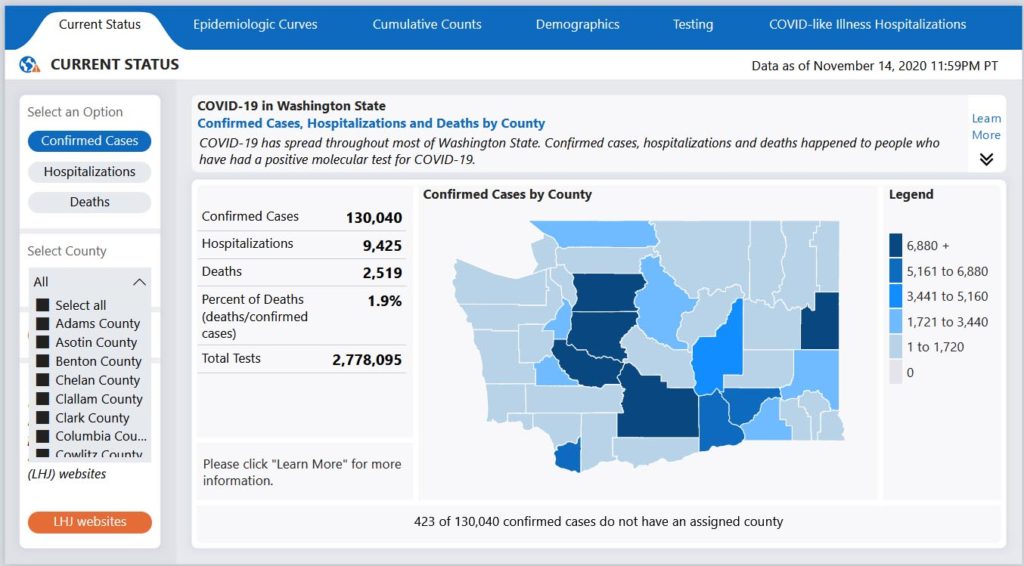 The skyrocketing daily new case counts for Washington state have forced the number crunchers at Johns Hopkins to compress the vertical (x axis) scale to keep the new numbers from shooting off the chart. This makes the earlier two infection peaks (occurring in April and July respectively) seem less dramatic but was necessary to show the new numbers in context. The most recent count as reported by Johns Hopkins shows a staggering new one-day new case record for our state of 2,309 on Nov. 15, more than double the “second wave” high point of 959 set July 18 (see the interactive chart for Washington state on the Johns Hopkins website here).

This record surge is further reflected in the Nov. 12 case rate of 234.3 (cases per 100K population, two-week rolling average), up a staggering 108.7 percentage points from the previous week’s figure of 125.6, putting the state goal of 25 (which we actually achieved as recently as March) increasingly out of reach and a testament to our state’s increase in viral activity. 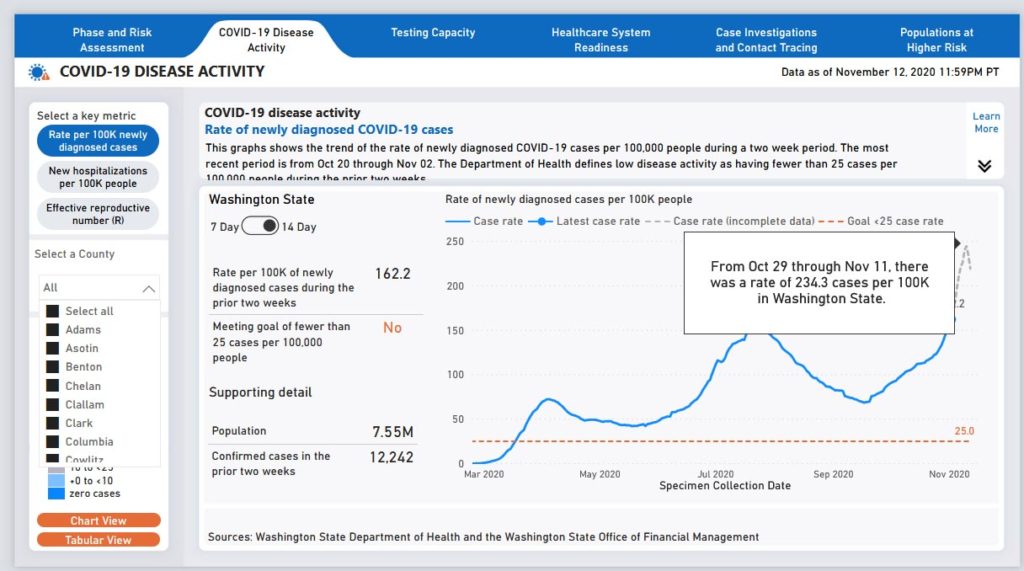 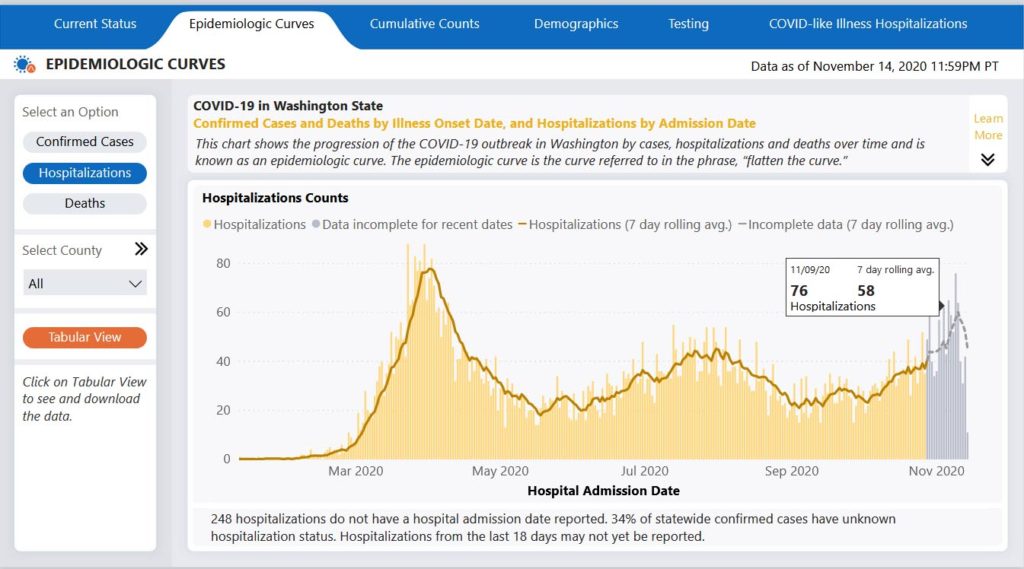 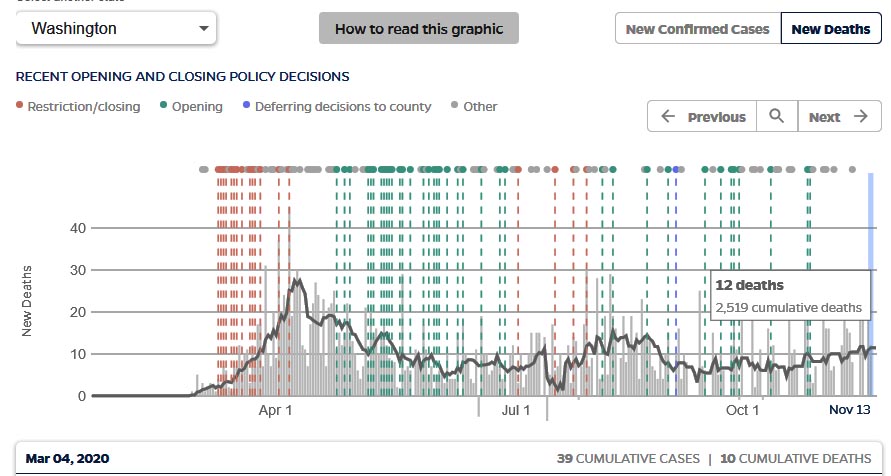 As illustrated by the two charts below, the overall number of tests in Washington state has increased to 251.6 per 100K, while the positivity rate has shot up from 4.2% last week to 7.9, meaning that one in every 12 Washingtonians who took a test came out positive. This number (rate of positives per 100K) dispels the common misconception that increasing case numbers are simply due to more testing activity. 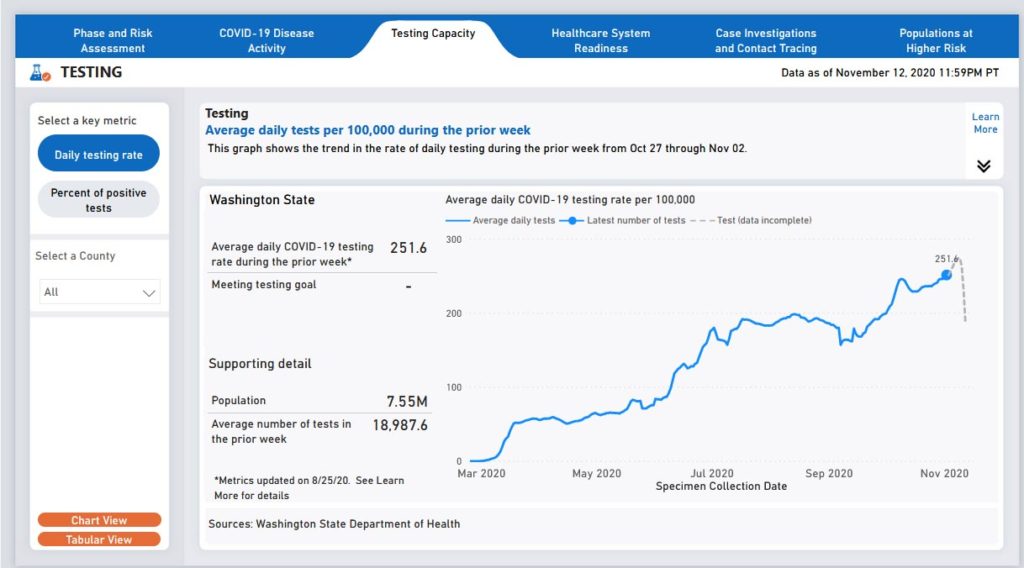 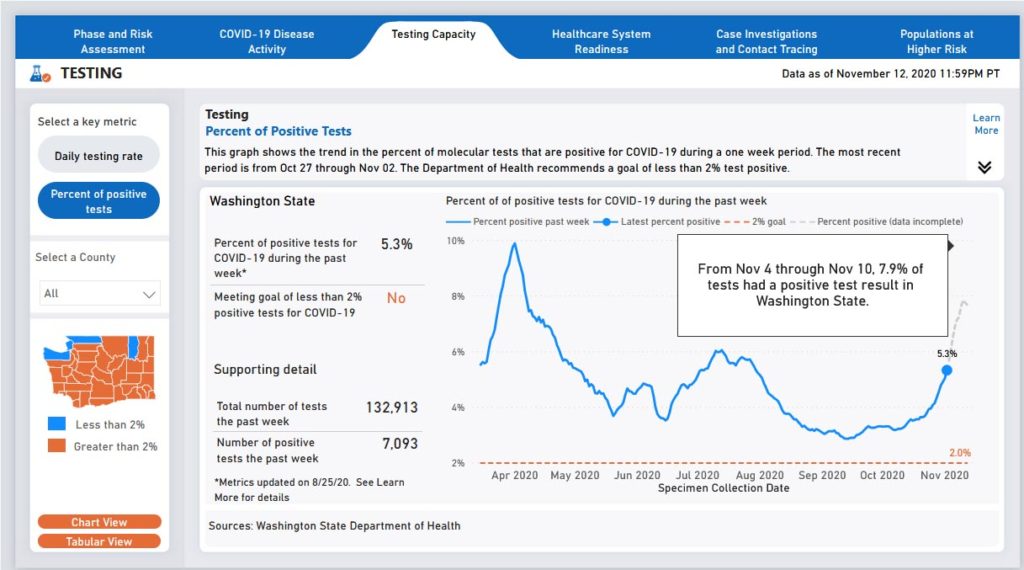 Despite the rising numbers, as of last week no Washington counties have reverted to an earlier phase of reopening – however all will be subject to the new restrictions announced on Sunday.  Note that the numbers to the left of the map summarize the latest numbers of critical metrics, some of which are reported in more detail above. 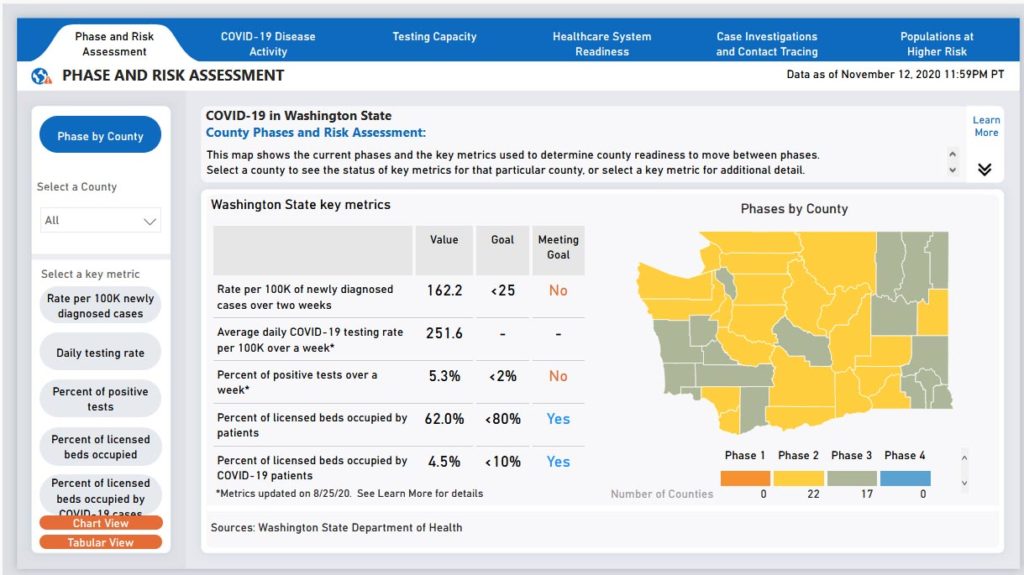 State demographic patterns continue unchanged, with the Nov. 14 report following the familiar pattern of most infections among younger people, and most hospitalizations and deaths in older populations, with those age 80 or older comprising a mere 4% of cases, but more than half the COVID-related deaths. 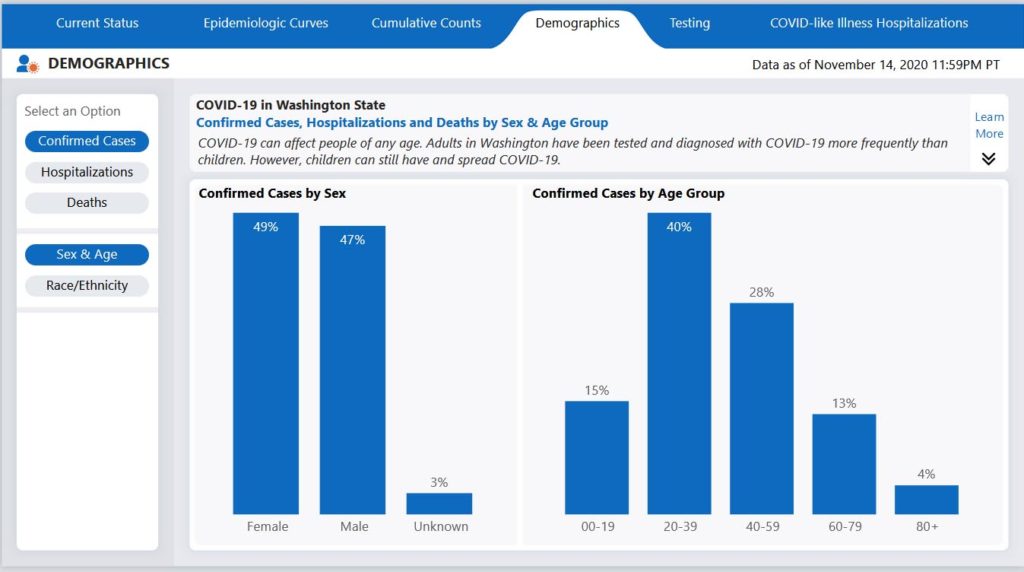 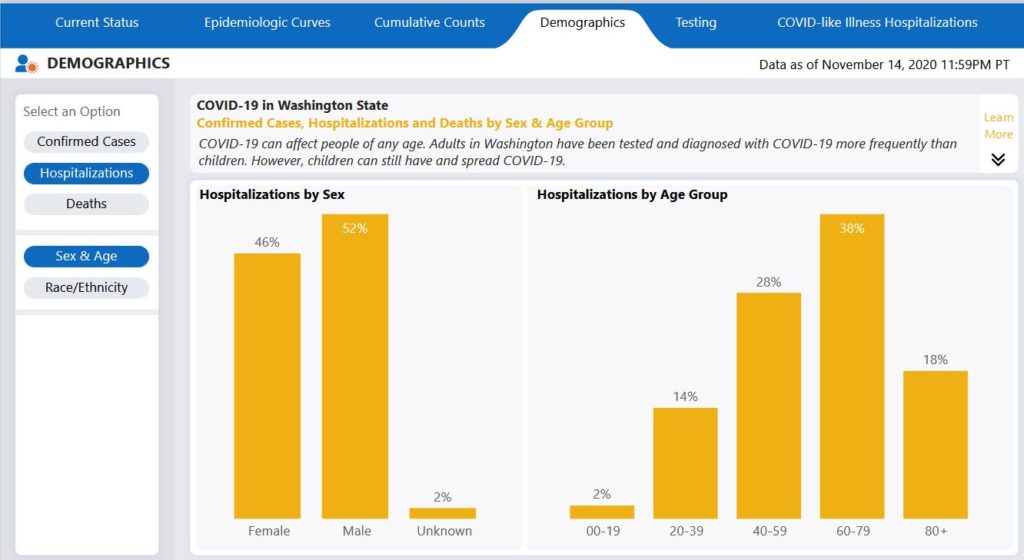 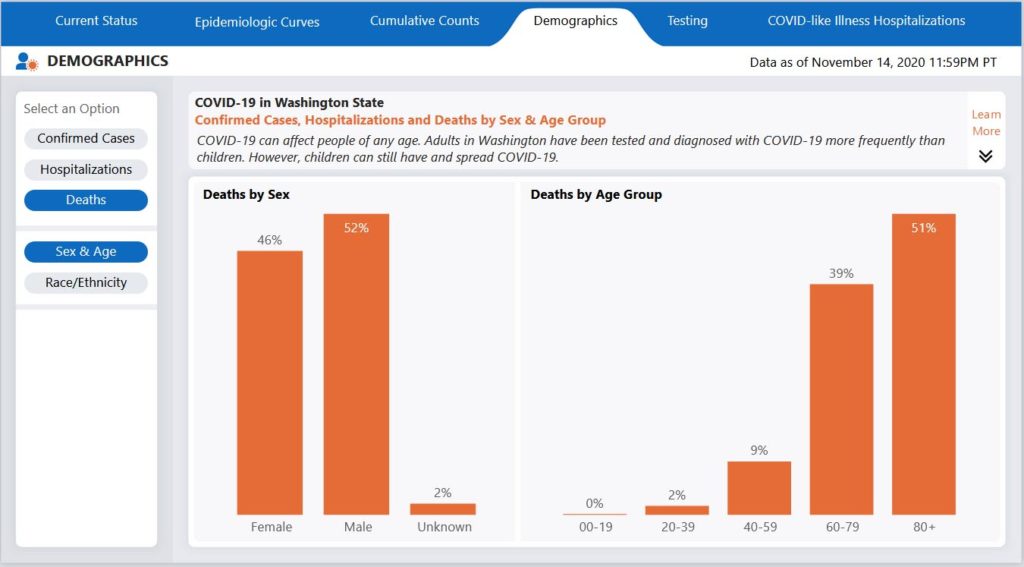 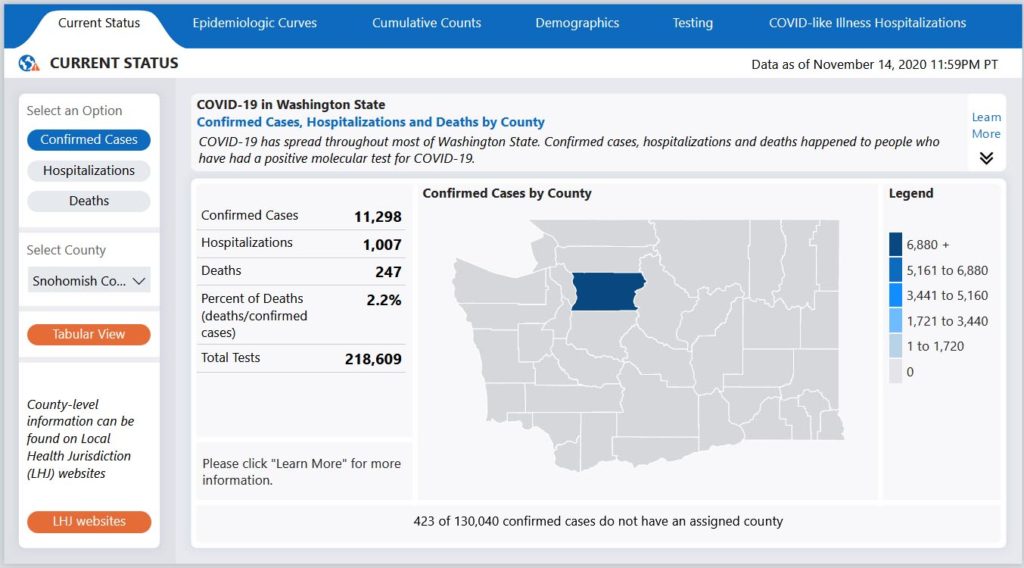 The Nov. 14 Snohomish County daily new case count moved further into record territory this week, surpassing previous counts and showing no sign of letting up. The grey bars represent incomplete data, which will increase further as these numbers are finalized. 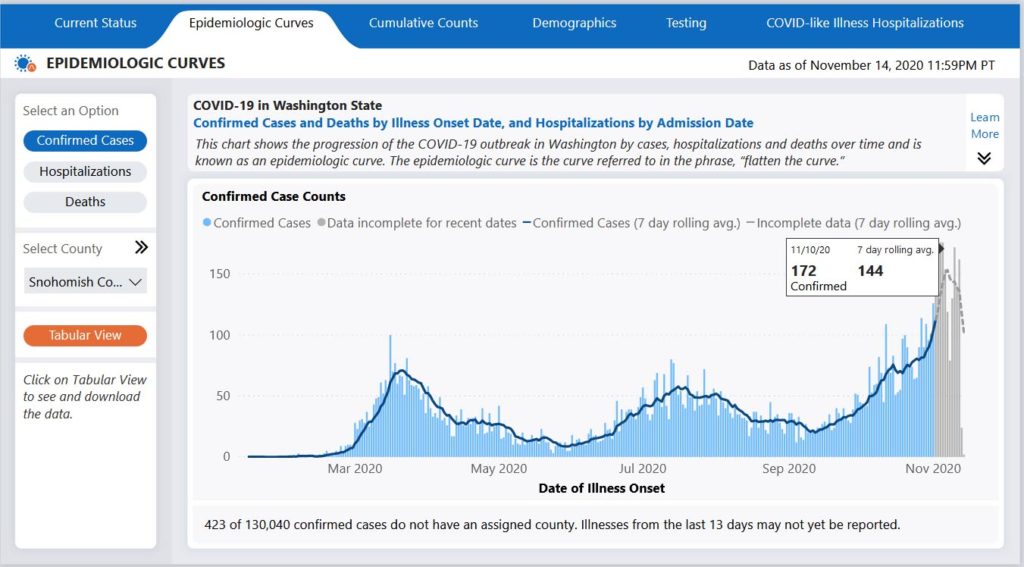 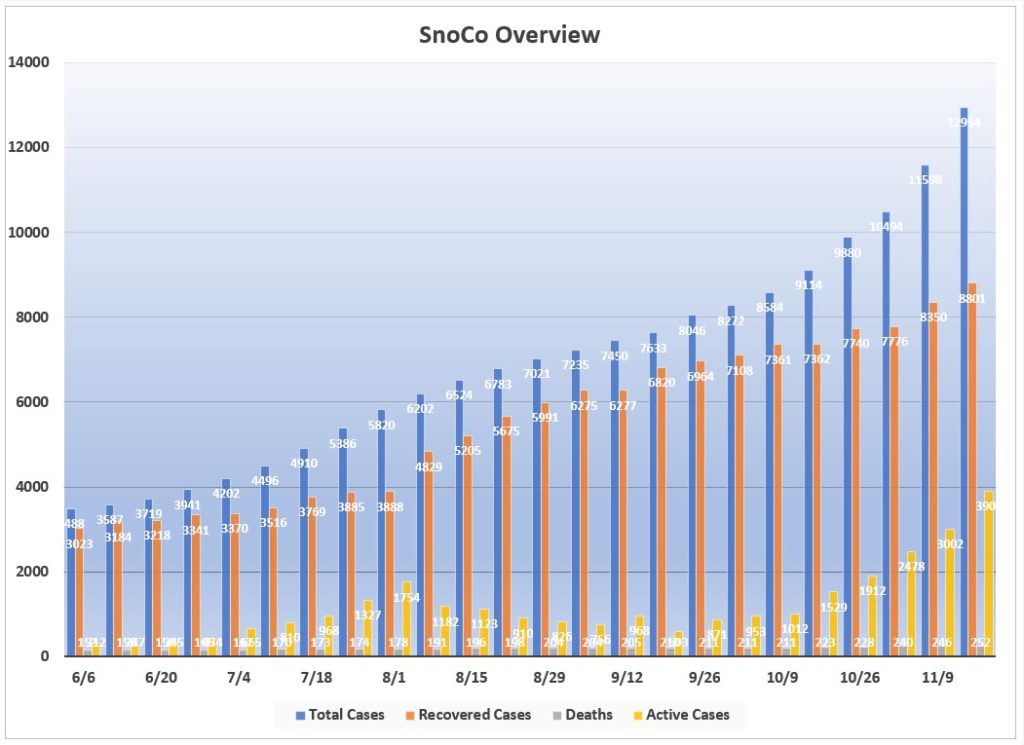 The two-week rolling average case rate chart from the Snohomish Health District is flying off the chart this week, forcing the statisticians to revise the x axis scale to accommodate the increase. This week shows an all-time high rate of 280.8 as of 11/14, an increase of 94 percentage points over last week. 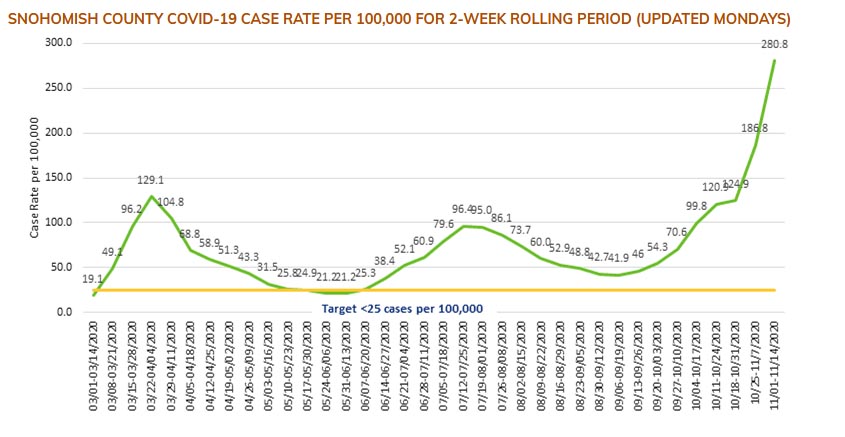 The latest numbers (current as of 11/7) on deaths at the county level are reported in the charts and tables below (compare these with the information posted above). 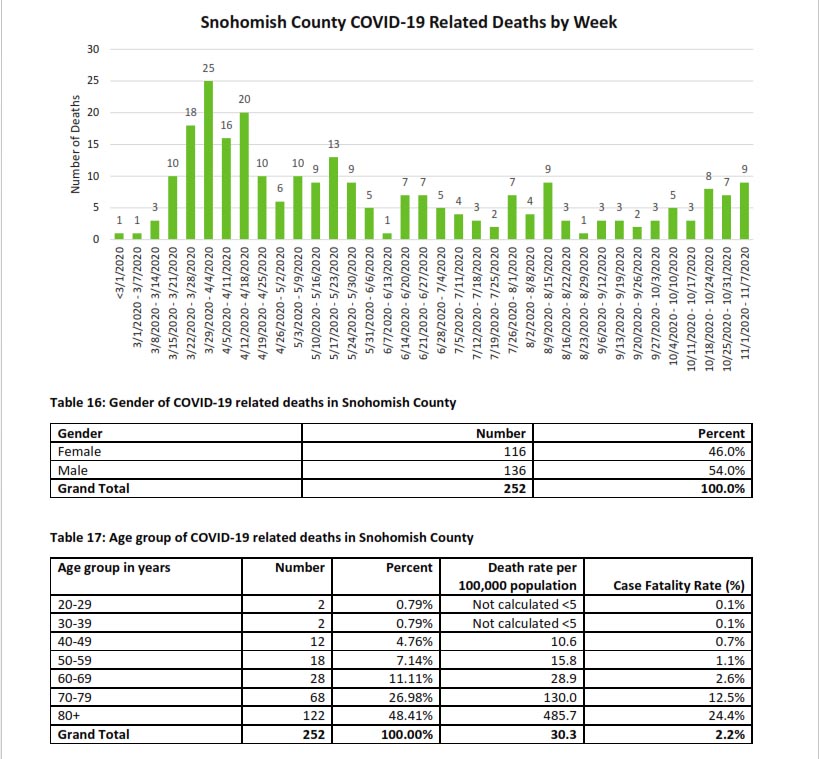 The testing activity table and chart from the Snohomish Health District below reflect and compare overall counts with numbers of positive results through Nov. 7. Note that the overall number of positives shows a sharp increase, moving from 6.2 to 9.6 as indicated in the rolling average line chart. 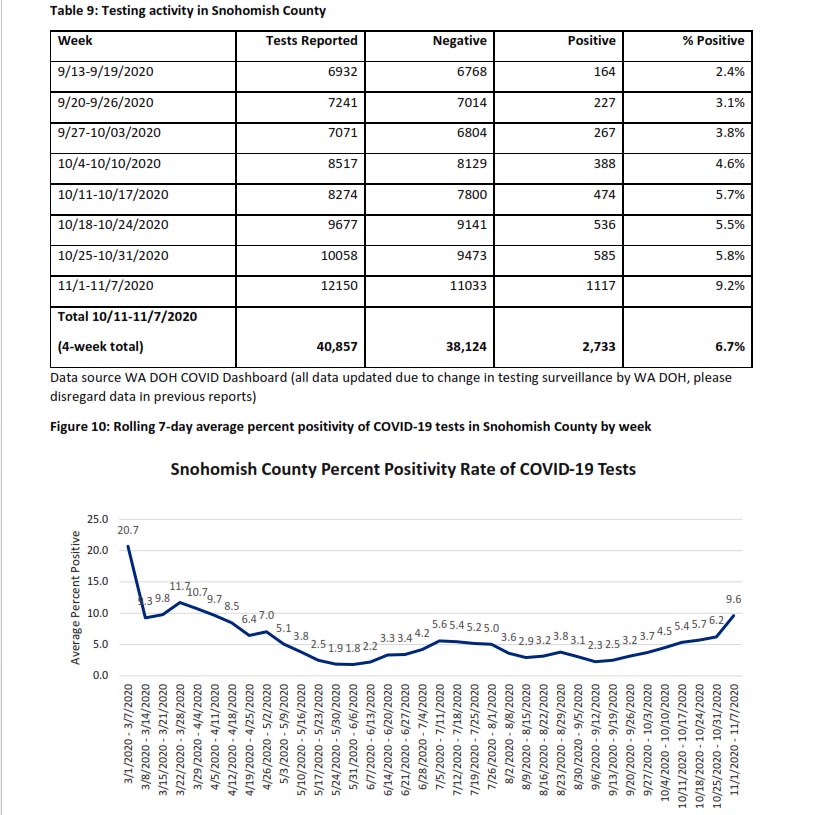 Note: With the exception of death numbers, these data are taken from the most recent updates from the Snohomish Health District Snapshots and Reports web page.  As data are verified, occasional true-ups are made in the interest of accuracy and these may result in changes to previously posted numbers. Verified death numbers lag by a week, and are taken from the Nov. 7  COVID-19 Weekly Update report from the Snohomish Health District. Because these are coming from two different sources, where necessary figures have been interpolated for clarity.

Critical metrics (total cases, recovered cases, deaths, and active cases) for our home cities are shown in the charts below. Note particularly the worrying upward trends in total cases and active cases, and the much slower increase in recoveries – all indicate that in our local area we are getting sicker faster than we are recovering. 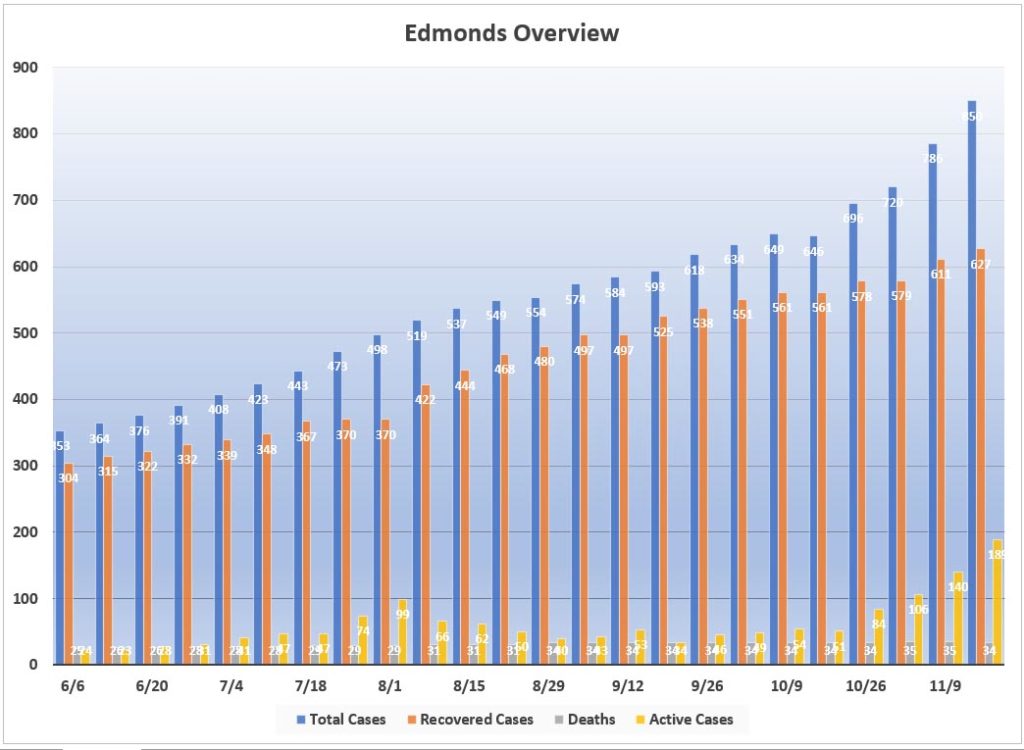 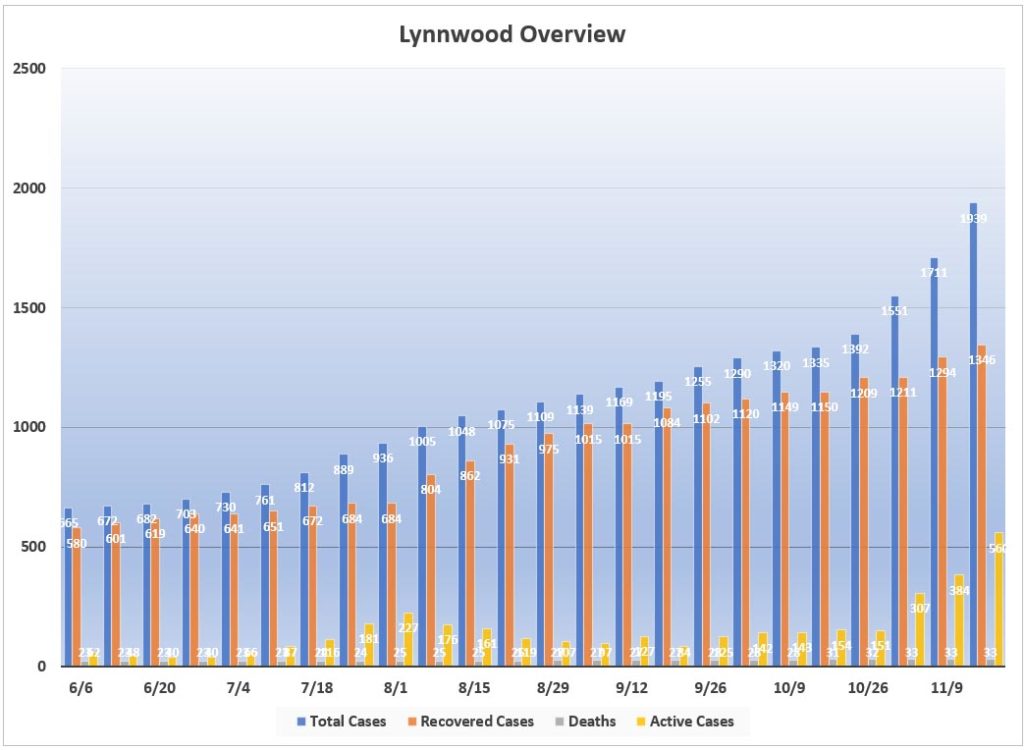 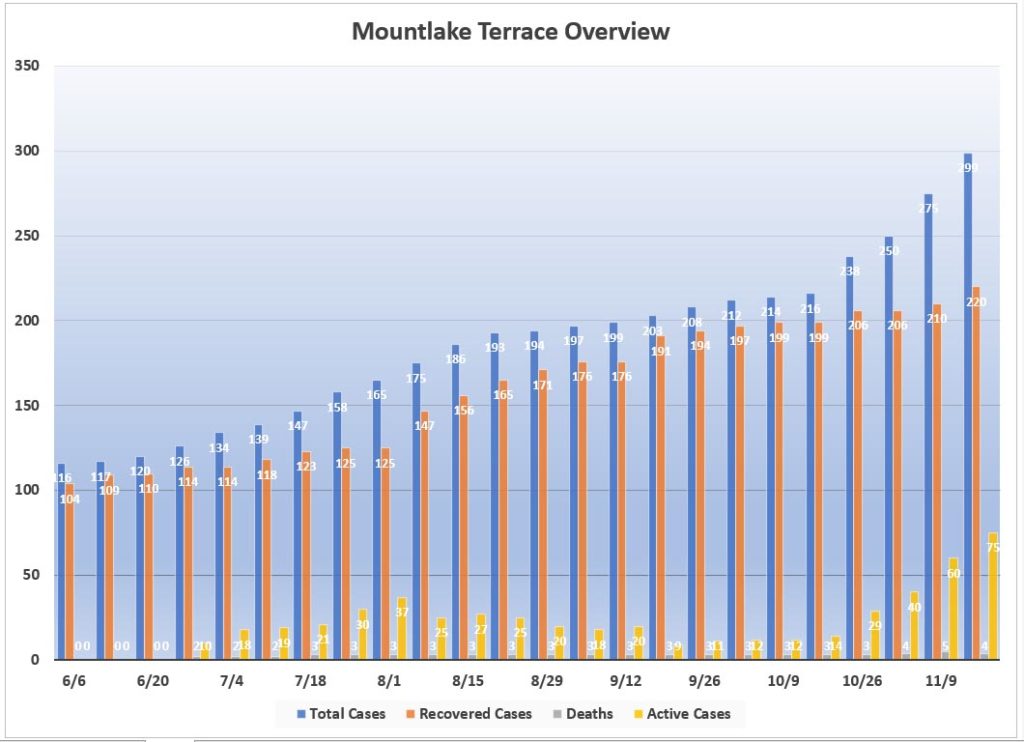 The local numbers summary, data as of 11/16 (note that some death numbers have been revised to reflect subsequent revised determinations of cause of death):