Answer: What is Jeopardy?

Absolutely right: Edmonds can claim two local Jeopardy contestants for our town. With the death of the heart and soul of Jeopardy, Alex Trebek, it seemed the right time to remember the iconic game show host. Trebek steered Jeopardy for 36 years, through more than 8,000 episodes; more than 20,000 contestants

Two of those contestants are Edmonds residents: Ken Jennings and Tim Raetzloff.

Ken Jennings holds the record for the longest winning streak in U.S game show history. In 2004, he won 74 consecutive Jeopardy games. His total winnings: $4,522,700 from Jeopardy and all his Tournament of Champions appearances, including $1 million this year for taking first place in Jeopardy! The Greatest of All Time.

Jennings told Time magazine that Trebek “…was part of the fabric of America’s evening—the center of a gathering place for the whole country…people invited him over every night for decades, just to hear the calming sound of his voice. He wasn’t just a broadcaster. He was part of the family.”

Jennings, 46, was born in Edmonds; grew up in Seoul, South Korea, and now makes Edmonds home again with his wife, Mindy and their two children. Before Jeopardy’fame, he was a software engineer. He admits he is a comic book and movie geek. His website lists his favorite 4,000 movies.

After Trebek died Nov. 8 from pancreatic cancer, Jennings tweeted that everyone was part of Trebek’s family in a way: “Alex wasn’t just the best ever at what he did. He was also a lovely and deeply decent man, and I’m grateful for every minute I got to spend with him,”

We reached out to Jennings but have not heard back. No wonder; he’s a busy guy. Jeopardy hired Jennings on as a consulting producer this year; there is talk he is in the running to become the next host. Just talk, for now. Stay tuned.

Tim Raetzloff is also an Edmonds Jeopardy contestant. Here’s Raetzloff on the show that aired on Jan. 17, 1989.

How he got that far is quite the tale.

At the time, Raetzloff was temporarily out of a job; had time and money set aside for the family and that’s when the Jeopardy  bug bit – hard. He was convinced he was going to be on the game show. The producers “discouraged me and discouraged me and discouraged me from coming down,” Raetzloff recalled. They told him they took very few applicants. But he flew to L.A., then stood in line outside the studio in 100-degree heat in August 1988. He sweated and waited with about 80 other hopefuls. Suddenly, Raetzloff was at a desk, given a pencil and 15 minutes to answer 50 questions. He made the first cut; one of only 12 to move on.

Then, he survived a round of practice games; there were six hopefuls now left. Jeopardy’producers warned that “we might call you back; we might not,” Raetzloff explained. Two weeks later, they called and told him to fly down, but still no guarantee he would be on the show. The call came within days of the expected birth of a fourth daughter for he and his wife, Jan.

Jan said “go.” So he lined up a substitute birthing coach and took off. But he knew he had better be back home before the baby came.

Raetzloff and his wife are a long-time Edmonds residents, raising their four children here. His passion is numbers (he’s a former stockbroker), history and writing. He’s an avid hiker and a railroad and ghost town hunter who has prowled Stevens Pass for years. He owns his own firm, Abarim Business Computers, he sits on the board of the Edmonds Historic Preservation Commission, and he loves trivia. That’s why he had to try for Jeopardy.

For two more days, Raetzloff sat in the game show studio, hoping for his turn. He watched a parade of hopefuls clutch their buzzer, try to outwit the competition and walk away winners. Few did.

In 1989, Trebek hosted both the Jeopardy and Concentration game shows,working six days a week. Raetzloff remembers Trebek telling him that hosting a game show “is a very short life; this program will probably shut down in two to three years and I’ve gotta make it while I can.” Trebek said he had no anticipation about hosting a game show for the long haul.

“I liked him; he was very friendly, very personable”, says Raetzloff. “He seemed to be a pretty regular guy… and I thought he was very genuine.”

Then, Trebek lowered the hammer on Raetzloff. He sat next to the host at the show’s buffet dinner (they taped five shows a day, well into the evening). “He informed me I had no chance of winning,” said Raetzloff, “because everyone else was younger and my reflexes wouldn’t be fast enough.” Raetzloff’s episode was next to tape. How’s that for sucking the air out of your hopes?

At that point, said Raetzloff, “I was just worried about not embarrassing myself.” Whle it was a relief to finally get on; he just wanted to be competitive.

Raetzloff was paired with Peggi (younger, and the current champion), who was paying for her college medical expenses and “just desperately wanted to win.” Right next to him was Tanya (also younger), whom Tim thought was just trying to “find her little niche in life.” Tim was the “old” guy at 41.

“I did badly in the first round,” he recalled. “I couldn’t get the timing down on pushing the button and if you don’t hit it at the right time, you’re locked out of answering.” By the end of the first round, he was in last place with just $600; Peggi had $1,300; Tanya was cleaning up with $3,500.

He has vivid memories of stumbling on his first answer. “it’s kind of a crap shoot, if you don’t know the categories,” he said. “I didn’t know the answer, I was just trying to figure out the buzzer timing.” His answer was way off base and he recalled Trebek gently teasing him about it for the rest of the show.

But, in Double Jeopardy, “I took the lead for a while,” Raetzloff said. He finished that round in second place. He had a shot at the big win on Final Jeopardy. Champion Peggi was a distant third; Tanya was his only obstacle.

Here is the answer on which Ratezloff’’s fate hung: 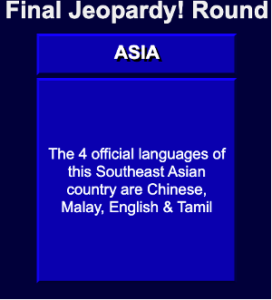 Peggi got it wrong. Tanya got it wrong. And Raetzloff? He also got it wrong. But Tanya didn’t wager enough to lose. She was the new champion. Raetzloff went home in time for the birth of his daughter Christina.

His total Jeopardy winnings: A Lazy-Boy sleep sofa, a phone answering machine, a Jeopardy board game and apparently a year’s supply of ramen soup. But Raetzloff had also won a lifetime of heartwarming memories.

PS: That ‘Final Jeopardy’ answer was: Singapore. The day after he got back from L.A., Raetzloff went book shopping and stumbled across a book with that very information in the first chapter.