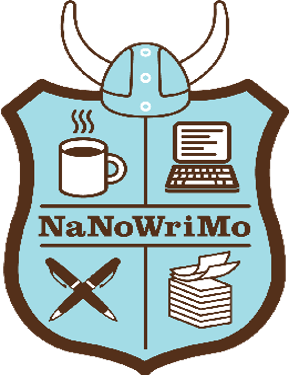 If you’re participating in the 50,000-word challenge in 30 days for nanowrimo, your chief concerns are speed and word count, and I have some hints to help you make it to the finish line.

Now that you’re well into the second week you may notice a lag in your pace. The first few days of writing are like starting a new diet: you’re gung-ho and cut out sugar and portion your food, but a week later you slide back into old habits, especially if you haven’t lost any weight. Maintaining a steady diet of writing 1667 words a day is difficult, especially if you are a first-time novelist. It’s hard to keep up the momentum, and at one point, you will hit the wall. The story may drift off to side paths, or sometimes life gets in the way.

Your work-in-progress might feel like an albatross, and this is the point where many people give up. But if you’re determined to make it to the finish line, here are some tips.

Rule 1: Keep writing. This means don’t stop to research or look up a more precise word in the thesaurus. If you overuse the same verbs, don’t sweat it. This is a draft. If you use place markers, you’ll easily find what to fix the piece in revision, (where real writing happens.)

[Brackets,] ALL CAPS, highlight and italics can be your best friends at this stage. If you know as soon as you you’ve used the wrong word in a sentence, isolate it with a marker.

Your marker may look something like this: He stood at WHICH? lake, and at that time of year, the wind made the waves crested like the ocean. [LOOK THIS UP TO VERIFY]

If you stop to make corrections too early you run the risk of falling into the Google rabbit hole where you begin to research Lake Michigan in October and next thing you know, you’re reading extensive articles about the Chicago World’s Fair. Unless the fair is part of your story, more writing time is lost.

Another ally is the strikethrough effect. (In Word this is under the Font function.) Because the object of nanowrimo is quantity rather than quality, allow your writing to be wordy. Use strikethrough on phrases you know you want to eliminate later; they still count as part of your word count, yet you’ve pre-revised for the delete key.

If you haven’t named a new character yet, or you forget the name of one of you wrote in Chapter One, a good standby for me is NAME, MAN, WOMAN, TEEN, etc. Occasionally I decide to change the name halfway through my story, so I’ll put a note to CHANGE NAME.

Rule 2: Remember this is a draft; it will be imperfect. Sometimes as I write I know a sentence is just terrible, and occasionally I will write THIS IS GARBAGE. But guess what? My rude notes to myself are included in my word count.

If you stop to edit diction and syntax too early, you’ll lose more momentum and possibly lose interest altogether. A draft is something for your eyes only. Anne Lamott eloquently discusses more of drafting in this essayexcerpted from her book, Bird by Bird.

Since I’m writing this piece in November, I’m adding it to my final word count at the end of November if I fall short.

Laura Moe is the author of three novels (two of which began as nanowrimos) and is currently President of Development at Edmonds based EPIC Group Writers. Click here to learn more about National Novel Writing Monthand its local affiliates.