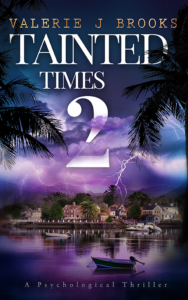 Your heart will be racing as you turn the pages of this psychological noir thriller and follow the adventures of former criminal defense attorney Angeline Porter. After her self-defense killing of two leaders of an extortionist mob, the new leaders want her money and then they want her dead. Tainted Times 2 indeed. She’s laying low in Kauai, but she’s uneasy in her hideout. She doesn’t want to hide, she wants to fight for justice. She yearns for a fulfilling life again, after the painful betrayal by her dead sister Sophie.

The sexy and cerebral Gerard, an undercover FBI agent and Sophie’s former lover, lures Angeline into being the bait in his continuing investigation. She debates the wisdom of working with him, but she’s ready to immerse herself into the effort trapping the mob that’s after her and ending their domination. Gerard surprises her with the secret she never suspected, that she has another sister who is very much alive and was raised by another family. Angeline’s hopes are quickly dashed as she discovers that her newly discovered sister could be connected to the extortionists determined to kill Angeline herself.

Angeline detaches from suspicious activities in Kauai that entangle her and heads for the mainland and the even greater hazards ahead. There are many intriguing twists and turns to Angeline’s fight for justice, and she is confronted with danger on all sides. Part of the answers to the mystery can only be found by delving into secrets of the past in her very own family. Secrets can be painful, and the consequences can sometimes be deadly. Angeline is going to have to rely on her wits and on skills she didn’t even know she has.

The action is riveting, and this novel keeps the tension taut throughout with the complex characters and their unpredictable motives. The plot sparks with dynamite when Gerard and Angeline come back together on this mission. They share an undeniable attraction that’s contaminated with  impossible complications. The author tells the story through Angeline as the action happens and the reader is propelled into her dynamic reactions and thought process in real time.

The author, Valerie J. Brooks’ first book in the Angeline Porter trilogy, Revenge in 3 Parts was a finalist for the Nancy Pearl Book Award. She received an Elizabeth George Foundation grant and the Monticello Award for Creative Writing. As a literary activist, she served as Associate Fiction Editor at Northwest Review for four years, was a Board of Directors member of Oregon Writers Colony and co-founded Willamette Writers Speakers Series. She’s a proud member of Sisters in Crime, and you can find out more at her website valeriejbrooks.com. Valerie enjoys life in Oregon with a nearby large family and lives in the McKenzie River Valley with her husband Daniel Connors and their spirited Havanese pooch Stevie Nicks.

One Reply to “Recommended Reads: An exortionist mob and a fight for justice in this psychological thriller”