A letter from Mayor Mike Nelson details, for the first time, why the mayor rescinded the offer to Sherman Pruitt to become Edmonds’ next police chief. My Edmonds News has obtained a copy of that letter. 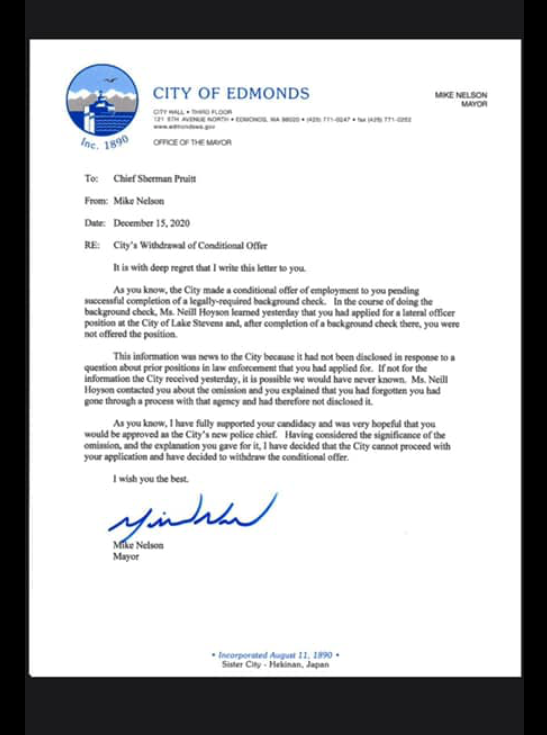 In the letter, dated Dec. 15, the mayor writes “it is with deep regret that I write this letter to you.” The reason Nelson gives for withdrawing the job offer: Pruitt had applied for a job with the Lake Stevens police and did not notify Edmonds of that fact.

Here is an excerpt from the Mayor’s letter:

My Edmonds News has learned that the “position… at Lake Stevens” refers to a job application Pruitt made there at least 10 years ago.

We asked Mayor Nelson for an interview to address the contents of the letter and other issues. A city spokesperson says Nelson is not doing interviews.

A My Edmonds News investigation published Tuesday, Dec. 15 found that the City of Edmonds background check also missed — or did not consider significant — other professional and personal information on Chief Pruitt. That investigation discovered that Pruitt had accepted a job with the Seattle Police Department in 2004; that in September 2004, while still training as a rookie for Seattle, Pruitt was the subject of a DuPont (Pierce County) police investigation into a harassment incident; and that the next month, October 2004, the Seattle Police Departmentfired Pruitt.

We also reported two cases of domestic violence in which Pruitt was a suspect, and that an ex-wife got a protective order against him;. And because of the case, Pruitt — then in the Marine Corps — was ordered to attend a 16-week anti-domestic violence training program. This is confirmed in testimony in a separate federal trial, in which Pruitt and his wife sued the City of Arlington for civil rights violations. The jury found in favor of the City of Arlington.

My Edmonds News has, in addition, confirmed and reported that these domestic violence issues were in a 60-page packet of transcripts of the testimony of that trial and were delivered to the mayor, human resources director and all seven city douncilmembers two days before the Dec. 8 vote to confirm Pruitt’s appointment to the Edmonds Chief of Police position.

This information was new to the city because it had not been disclosed in response to a question about prior positions in law enforcement you had applied for. If not for the information the city received yesterday, we might never have known. Ms. Neill-Hoyson contacted you about the admission and you explained that you had forgotten you had gone through a process with that agency and therefore had not disclosed it.”

As you know, I have fully supported your candidacy and was very hopeful that you would be approved as the City’s new Police Chief.  Having considered the significance of the omission, and the explanation you gave for it, I have decided that the City cannot proceed with your application and have decided to withdraw the conditional offer.

I wish you the best

In a statement on Tuesday, Nelson said he plans to begin a new national search for police chief in 2021.