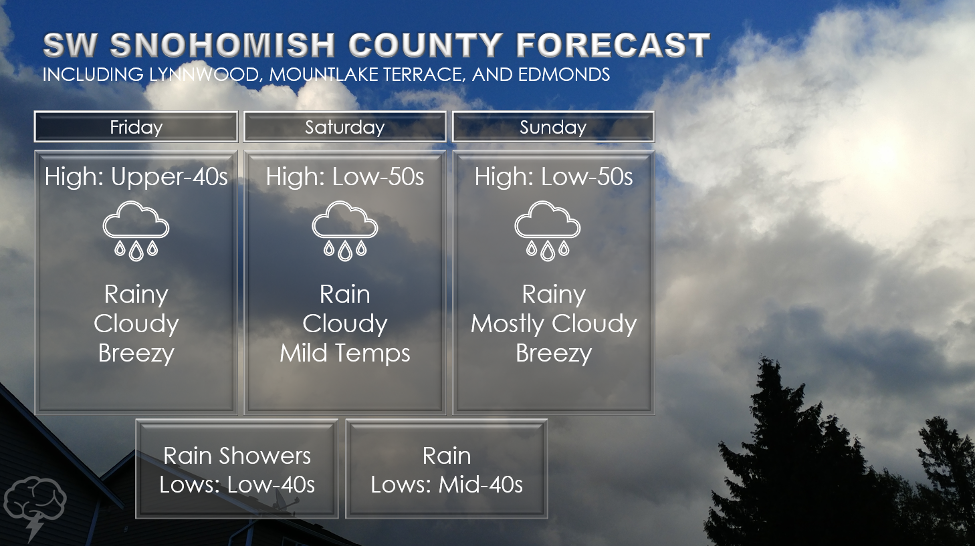 For the month of December thus far, we are running behind in terms of average total precipitation. Through Dec. 16, Paine Field has registered 1.12 inches of rain in the gauge. The normal amount for the same time frame is 2.66 inches. However, we are expected to play catchup this weekend, as a couple storms—including an atmospheric river—are poised to bring decent rainfall to the region.

If you aren’t familiar with the term or need a reminder, an atmospheric river is a narrow plume of moisture up in the atmosphere that is generally associated with a lot of rainfall. These bands of moisture tend to originate from the tropical/subtropical regions. You can read more about atmospheric rivers and their impacts here.

Before this atmospheric river arrives, a front is expected on Friday, which will bring with it wet and breezy conditions. This first system is expected to be rather typical for this time of year, with impacts not being too significant.

Showers are expected to stick around through Saturday before the atmospheric river arrives later in the day. This will be a more significant system, with higher precipitation totals expected. Below is the GFS model showing integrated water vapor (IWV) for late Saturday night. This product represents the amount of water vapor in a vertical column, if it were all condensed into liquid water. The higher the value, the more moisture there is in the atmosphere, and the greater potential for significant rainfall totals. Notice how the higher values of IWV are aimed directly at the Pacific Northwest. 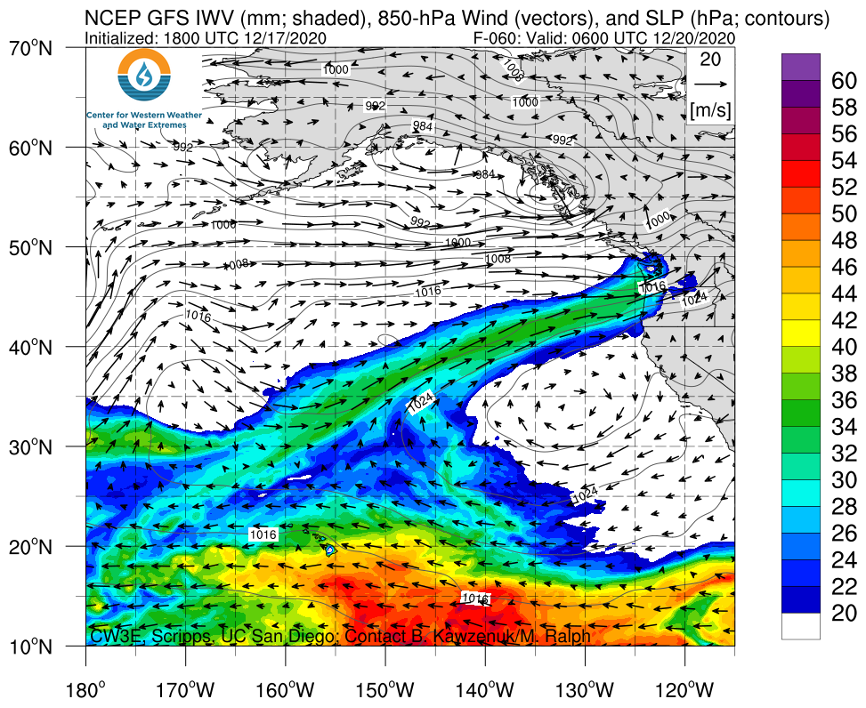 An interesting thing to note is that high temperatures on Saturday and Sunday are expected to be above average—in the low 50s (normal is in the mid-40s). In the above image, notice how the long band of moisture originates from more tropical regions. The air in this region tends to be warmer, so along with the moisture, atmospheric rivers can bring with it warmer than average temperatures.

In terms of impacts, our area could see between an inch or two of rain, though lower totals could occur depending on which regions fall in the rain shadow of the Olympics. Some creeks and rivers could see some water rising, as well, so if you live near any flood-prone regions, make sure to pay close attention to the forecast. Also, remember: Never drive through flooded roads should you encounter them—turn around, don’t drown!

Rain should taper off later in the day on Sunday, but showers and breezy conditions are still possible. Overall, it is going to be a damp weekend.

Wet weather is expected yet again on Monday as another front passes through, bringing with it more precipitation.

If all this rain is putting a damper on your Christmas spirit, there is hope: Models are suggesting that we could dry out afterwards in the couple days leading up to Christmas. I can’t believe that it is already the weekend before Christmas!

One Reply to “Under the Weather: A wet weekend on tap, featuring an atmospheric river”