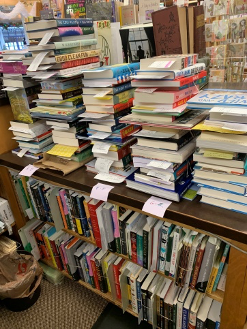 2020 was a year like no other, and honestly, we’re pretty glad to see it go. More than ever, we turned to books for entertainment, comfort and information during tough times. Reading kept us connected to our friends, families and communities, near and far, opened our eyes to new experiences, shed light on our shared responsibility to seek a fairer world…and even helped us tackle some messy closets. Here’s to a better 2021, and to all the great books to come.

One of our favorite photos of the year: stacks of customer orders ready for pick up in mid-December – it seems that everyone in Edmonds got books! A huge and heartfelt “Thank you!”  We survived the crazy year because of the support of our customers and community. We look forward to enabling your book habit for a long time to come.

One of my favorite things to do at the end of the year is to look back at what we read. 2020 was heavy on nonfiction, with many of titles being about striving to be better humans — an excellent goal! With a few great fiction titles thrown in! And with a small drumroll, I present: the top 15 best-selling titles at Edmonds Bookshop in 2020:

Special mention: “A Gentleman in Moscow” by Amor Towles is #23! In paperback since March 2019. Still one of our all-time favorites!

By all accounts, it’s going pretty well — join us! 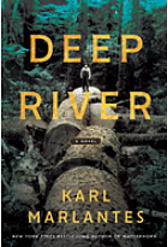 From the bestselling author of “Matterhorn,” comes a rich family saga about Finnish immigrants who settle and tame the Pacific Northwest, set against the early labor movements, World War I, and the upheaval of early 20th-century America. Staff recommended.

Send us an email here to register your email for Book Club and we will send you an invitation with a Zoom Meeting link as each book club meeting is scheduled. [More specific, expansive information on our website.]

Link to our Bookclub list for the first few months of 2021.

“Memorial” by Bryan Washington.  Chosen for IndieNext. Recommended on npr.

“The Best of Me” by David Sedaris. A gift edition of David Sedaris’s best stories, hand-picked by David himself. And because half the fun is listening to him, there is also the audio version available from our partners at LibroFM.  Staff recommended.

“One Life” by Megan Rapinoe.

“A Promised Land: The Presidential Memoirs, Volume 1” by Barack Obama. All the information here.  Staff recommended.

“Dearly: New Poems” by Margaret Atwood. Her first collection of poetry in over a decade.

“Before the Coffee Gets Cold: A Novel” by Toshikazu Kawaguchi. Chosen for IndieNext.

“The Kingdom” by Jo Nesbo. A tense and atmospheric standalone thriller. Two brothers. One small town. A lifetime of dark secrets.

“The Ickabog” by JK Rowling. A warm, fast-paced, funny fairy tale of a fearsome monster, thrilling adventure, and hope against all odds.

“The Law of Innocence: A Lincoln Lawyer Novel” by Michael Connelly.

“Perestroika in Paris” by Jane Smiley. This beguiling new novel is itself an adventure that celebrates curiosity, ingenuity, and the desire of all creatures for true love and freedom. A lovely review in The Seattle Times, here.

“Mediocre: The Dangerous Legacy of White Male America” by Ijeoma Oluo. Review in The Seattle Times.

“Long Bright River” by Liz Moore. A gripping suspense novel that is also a moving story of sisters, addiction, and the formidable ties that persist between place, family, and fate. Chosen for IndieNext. In paperback.

“The House in the Cerulean Sea” by TJ Klune. Staff recommended. In paperback.

Some books of note being released in January 2021:

“The Mystery Of Mrs. Christie” by Marie Benedict. A thrilling reconstruction of one of the most notorious events in literary history: Agatha Christie’s mysterious 11-day disappearance in 1926.  Chosen for IndieBound. December 29, 2020.

“The Authenticity Project: A Novel” by Clare Pooley. The story of a solitary green notebook that brings together six strangers and leads to unexpected friendship, and even love.  Chosen for IndieBound.  Now in paperback. December 29, 2020.

“Beginners: The Joy and Transformative Power of Lifelong Learning” by Tom Vanderbilt. The best-selling author gives us an inspirational journey into the transformative joys that come with starting something new, no matter your age. January 5, 2021.

“Watching from the Dark” by Gytha Lodge. When a vibrant young woman is murdered while on a video chat, a small-town detective wades into a circle of friends and lovers with dangerous secrets. In paperback. January 5, 2021.

“The Prophets” by Robert Jones Jr. This debut novel centers on a romance between two enslaved men, Samuel and Isaiah, in Civil War-era Mississippi. After another enslaved man discovers their relationship, he attempts to turn the rest of the plantation against them, believing it puts everyone in danger. Chosen for IndieBound. January 5, 2021.

“Our Darkest Night: A Novel of Italy and the Second World War” by Jennifer Robson. To survive the Holocaust, a young Jewish woman must pose as a Christian farmer’s wife in this unforgettable novel –a story of terror, hope, love, and sacrifice, inspired by true events, that vividly evokes the most perilous days of World War II. Chosen for IndieBound. January 5, 2021.

“The Wife Upstairs: A Novel” by Rachel Hawkins. A delicious twist on a Gothic classic, this book pairs Southern charm with atmospheric domestic suspense, perfect for fans of B.A. Paris and Megan Miranda. Chosen for IndieBound.  January 5, 2021.

“The Dutch House: A Novel” by Ann Patchett. Her most powerful novel to date: a richly moving story that explores the indelible bond between two siblings, the house of their childhood, and a past that will not let them go. This is the story of a paradise lost, a tour de force that digs deeply into questions of inheritance, love and forgiveness, of how we want to see ourselves and of who we really are.  Chosen for IndieBound.  Now in paperback. January 5, 2021.

“Highfire: A Novel” by Eoin Colfer. A hilarious and high-octane adult novel about a vodka-drinking, Flashdance-loving dragon who lives an isolated life in the bayous of Louisiana–and the raucous adventures that ensue when he crosses paths with a 15-year-old troublemaker. Chosen for IndieBound.  Now in paperback. January 5, 2021.

“Bryant & May: Oranges and Lemons: A Peculiar Crimes Unit Mystery #17 by Christopher Fowler. When a prominent politician is crushed by a fruit van making a delivery, the singular team of Arthur Bryant and John May overcome insurmountable odds to reunite the PCU and solve the case in this brainy new mystery. Staff recommended series. January 12, 2021.

“Robert B. Parker’s Someone to Watch Over Me (Spenser #33)” Robert B. Parker died in 2010, but his iconic Boston private eye Spenser lives on in the addictive books Ace Atkins conjures up. January 12, 2021.

“A Swim in the Pond in the Rain: In Which Four Russians Give a Master Class on Writing, Reading and Life” by George Saunders. From the bestselling, Booker Prize–winning author of “Lincoln in the Bardo” and “Tenth of December” comes a literary master class on what makes great stories work and what they can tell us about ourselves—and our world today. Chosen for IndieBound.  January 12, 2021.

“Concrete Rose” by Angie Thomas (HarperCollins, Jan. 12). A prequel to Thomas’ mega-bestselling YA novel “The Hate U Give,” this book revisits Garden Heights 17 years before the events of the first book, focusing on the life of teenage Maverick Carter.  January 12, 2021.

“Black, White, and The Grey Book: The Story of an Unexpected Friendship and a Beloved Restaurant” by Mashama Bailey and John O. Morisano. A story about the trials and triumphs of a Black chef from Queens, New York, and a White media entrepreneur from Staten Island who built a relationship and a restaurant in the Deep South, hoping to bridge biases and get people talking about race, gender, class, and culture. January 12, 2021.

“The House On Vesper Sands” by Paraic O’Donnell. With all the wit of a Jane Austen novel, and a case as beguiling as any in Sherlock Holmes’ casebook, the author introduces a detective duo for the ages and slowly unlocks the secrets of a startling Victorian mystery. By turns smart, surprising, and impossible to put down, it offers a glimpse into the strange undertow of late nineteenth-century London and the secrets we all hold inside us. Chosen for IndieBound.  January 12, 2021.

“The Children’s Blizzard: A Novel” by Melanie Benjamin. From the bestselling author of “The Aviator’s Wife” comes a story of courage on the prairie, inspired by the devastating storm that struck the Great Plains in 1888, threatening the lives of hundreds of immigrant homesteaders, especially schoolchildren.  Chosen for IndieBound.  January 12, 2021.

“Cleanness” by Garth Greenwell. Chosen for IndieBound.  A New York Times Notable Book of 2020. In the highly anticipated follow-up to his beloved debut, “What Belongs to You,” Greenwell deepens his exploration of foreignness, obligation, and desire. Now in paperback. January 12, 2021.

“The Resisters: A Novel” by Gish Jen. An amazing story of a world that looks only too possible, and a family struggling to maintain its humanity in circumstances that daily threaten their every value and their very existence.  Chosen for IndieBound.  Now in paperback. January 12, 2021.

“Before She Disappeared” by Lisa Gardner. From the bestselling author comes a propulsive thriller featuring an ordinary woman who will stop at nothing to find the missing people that the rest of the world has forgotten. January 19, 2021.

“Land: How the Hunger for Ownership Shaped the Modern World” by Simon Winchester. Using his own land purchase as a jumping-off point, Winchester explores the political, social and emotional meaning humans have attached to property over the centuries. January 19, 2021.

“Shiver” by Allie Reynolds. In this propulsive locked-room thriller debut, a reunion weekend in the French Alps turns deadly when five friends discover that someone has deliberately stranded them at their remote mountaintop resort during a snowstorm. January 19, 2021.

“American Baby: A Mother, a Child, and the Shadow History of Adoption” by Gabrielle Glaser.  The shocking truth about postwar adoption in America, told through the bittersweet story of one teenager, the son she was forced to relinquish, and their search to find each other. January 26, 2021. 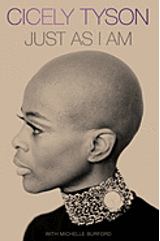 “Let the Lord Sort Them: The Rise and Fall of the Death Penalty” by Maurice Chammah. A deeply reported, searingly honest portrait of the death penalty in Texas—and what it tells us about crime and punishment in America. January 26, 2021.

“Just As I Am” by Cicely Tyson. Now 96, with a remarkable stage and screen career dating back to the 1950s (following success as a model), the Presidential Medal of Freedom winner is telling her life story, describing the book as “my truth. It is me, plain and unvarnished, with the glitter and garland set aside.” January 26, 2021.

“Let Me Tell You What I Mean” by Joan Didion. This essay collection unites 12 Didion pieces, published from 1968 to 2000, on a variety of topics: journalism, California robber barons, not getting into Stanford, Martha Stewart. January 26, 2021.

Stay safe. Do your best to stay sane. And as always: Happy reading!