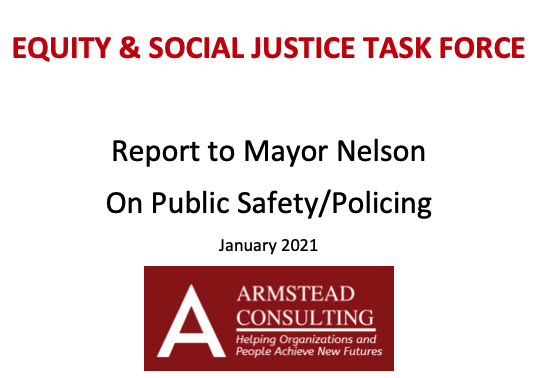 The Edmonds Police Department needs to do a better job of working with — and understanding the needs of — communities of color and addressing the social services needs of its residents. Those were among the takeaways of a report from an Equity and Social Justice Task Force appointed last year by Edmonds Mayor Mike Nelson.

The task force report on Public Safety and Policing includes several findings and recommendations. The full report can be found at http://report.edmondswa.gov.

Among the task force’s findings:

The task force’s recommendations for the police department include:

Nelson announced in June 2020 he was appointing the Equity and Social Justice Task Force “to help identify and correct issues of systemic and implicit bias within city operations in response to the aggressions and inequities perpetrated on African-Americans around the nation and in our region.” The task force began meeting in August 2020 to study equity-related issues within city government, and also had a goal of creating an Equity Toolkit and an Equity Work Plan for the city.

The task force consists of 13 members, including a combination of civic and business community members, as well as representatives from regional equity and inclusion organizations.

Over the last six months, the task force has worked under the guidance of Bellevue-based Armstead Consulting, which specializes in equity and justice work. The consultant assisted the task force in providing information on best practices for this process, but the task force drove and completed the work, Nelson said.

“This report found problems in how we police and gives solutions to do a better job of supporting Black residents and other marginalized populations,” Nelson said. The mayor said he is sharing the report with the Center for Public Safety Management (CPSM), the Washington, D.C.-based firm he has hired to conduct a police performance audit, and the firm he has hired for a national police chief search — the  International Association of Chiefs of Police — “to help inform expectations for our next police chief moving forward.”

“I want to thank the citizen task force members who dedicated themselves to help address equity and social justice issues facing our community,” Nelson added.

The Equity Toolkit included in the report provides  a set of questions aimed at helping decision-makers focus on equity in both their processes and outcomes.  The questions are designed to create a more inclusive perspective, drawing attention to how a decision may create the potential to affect marginalized groups, the city said.