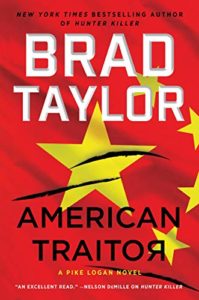 American Traitor…are we in fact on the verge of another world war?

New York Times best-selling author Brad Taylor’s latest book, American Traitor, seems more fact than fiction as protagonist Pike Logan, a highly-trained elite member of a special unit, is on the desperate hunt for a man who is about to betray his country—and ignite a horrific new world war.

For those not familiar with the author, Brad served this country honorably for 21 years and is a veteran of the U.S. Army Infantry and Special Forces, including eight years with the 1st Special Forces Operational Detachment – Delta, popularly known as Delta Force. Brad retired in 2010 after serving more than two decades and participating in Operation Enduring Freedom and Operation Iraqi Freedom, as well as classified operations around the globe.

His books have sold more than 2 million copies.

In American Traitor, Taylor reveals it is not really Hong Kong that is the end game for China—it’s Taiwan. While the United States and the rest of the world would not tolerate an outright Chinese invasion of Taiwan, what if Taiwan were to attack China first? What if Taiwan could be tricked through manipulation of artificial intelligence into believing that China was mounting a full-scale invasion, and Taiwan acted pre-emptively? Who would blame China for defending itself?

Entering a wilderness of mirrors, Pike and the task force must undertake daring reconnaissance, extraction and killing missions at every turn while trying to adhere to the legal and moral rules that govern their conduct in the murky and deadly world they inhabit. But one thing is certain: Beyond all other considerations, Pike will never allow the killer of any member of his team to escape justice.

I had Brad back on The Military Wire v-cast to not just discuss his latest book but also share, from his experience, how one can navigate these uncertain times with confidence. Having been in many volatile situations where the best plans fell to “improvise and adapt quickly,” Brad shares in the interview what we all can do daily that will bring more peace of mind in times of uncertainty.

Bottom line: The uncertainty of the world is only accelerating, and the best laid plans will be tested. Lose yourself in American Traitor and find yourself remembering what makes this country so great.

Mike Schindler is a U.S. Navy veteran and CEO of Operation Military Family, a 501(c)(3) veteran service organization that provides proven pathways for Veterans to discover and deploy their greatest gifts in family, work and life. Schindler is an award-winning author, the national podcast host of The Military Wire/VISION2020 and an effective trainer who has been featured in USA Today, CBS Radio, Entrepreneur Radio, the Lars Larson Show, the Boston Globe, Q13 FOX, Yahoo Finance, and others.

One Reply to “Military Wire: ‘American Traitor’ — fact or fiction?”