Since I have a dog, it’s essential to take him for walks. Sometimes they are very short walks, other times they stretch out. It all depends on how I feel, how much I have to do and, as is the case especially living in the Pacific Northwest, the weather.

It was a chilly but dry morning when I forced myself away from watching the news broadcast live video of domestic terrorists attacking the Capitol Building in Washington, D.C. on Jan. 6. I drove Sam to our favorite park — Pine Ridge — near our home. This forested park is the same area where, last December, we found a small fir tree fully decorated for Christmas tucked in between the tall conifers. 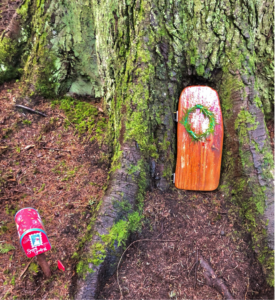 I let Sam off-leash to run for his cardio, practice a little of his favorite Olympic sport of log walking, and  allowed him to get dirty since he needed a bath anyway. As I watched him gallop up the incline into the woods, a bright, unnatural color caught my eye. I followed Sam upward and as my eyes adjusted to the dim forest light, I found a varnished wooden door in the base of a tree.

The arched door had a wreath with red berries, which was placed neatly in the center of the hinged door with its miniature door latch. To the left side, I saw a whimsically decorated mailbox. While telling Sam not to relieve himself on it, I took photos and left feeling cheered by what I saw, but wanted to get back home to the news.

As we left and entering the main path leading to the parking lot, there was a young man squatting and photographing mushrooms on a log. On a whim, I asked him if he wanted to see my discovery. He was in his early 20s and someone I can only describe as a sweet hippie-hobbit (which I say in the nicest possible way, being an old hippie myself). Enthusiastically, he followed me back up into the woods. The bad news on TV could wait; this was much more refreshing to my mental state. 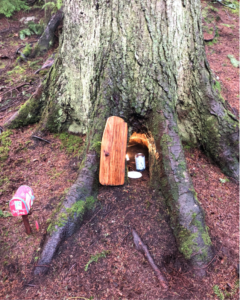 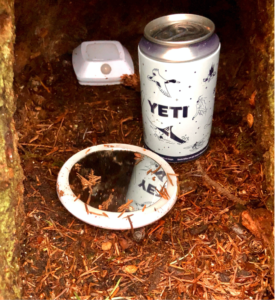 The young man (H.H.) immediately crouched down and opened the “door to the tree.” There we found  a small room with a miniature can lettered “Yeti” and the inner sanctum was lit up by a battery-operated light. H.H.  took the can and stood while opening it to find an envelope, which held a handwritten thank you card  wishing us a Happy New Year along with best wishes for the new year. We were both smiling by then. Who did this? Did they do the Christmas tree, too, I wondered aloud. 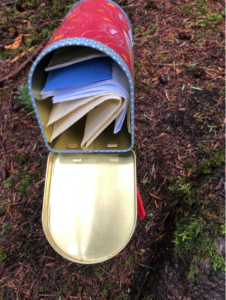 I opened the tiny mailbox, which — to my shock — was stuffed with messages to “Ru Rabbit”! Seriously? 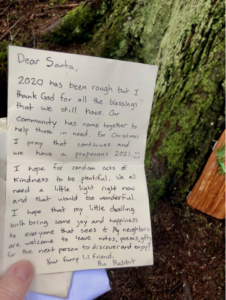 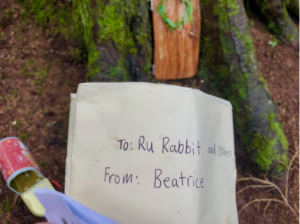 There was a message for “Santa or any passerby” with the return address of “Ru Rabbit,” which I  read. Ru thanked the community for being so generous during the holidays, hoped 2021 would be a better year, and welcomed anyone to leave messages or gifts. The other messages, notes and drawings seemed to be mostly from children. (I didn’t read them, since it felt like personal mail.)

Maybe one day I will return with a little gift. I was thinking of a small broom for the “front porch,” which may come in handy after so many visitors.

It was an hour later as H.H. and I were parting when he said, looking at me intently with his intense crystal blue eyes, how he didn’t believe in saying “Goodbye” but rather liked saying, “I love you”  instead. We all need more of that. So we exchanged our “I love you’s” as he went up the hill and I went down.

On a day when our country was reeling, not only from a pandemic for almost a year, but now also from a chilling, unbelievable assault on the Capitol Building of the United  States, it’s always when you least expect it, even as the world seems to be falling apart, there can be light inside the room of a tree decorated with little sprinkles of enchantment.