The Edmonds mayor, human resources director and at least one city councilmember knew about domestic violence issues in police chief candidate Sherman Pruitt’s past before the council voted to confirm him on Dec. 8 as Edmonds’ new police chief.

My Edmonds News continues to investigate the police chief recruitment process, the confirmation and subsequent move by Mayor Mike Nelson to rescind the job offer. We have asked the mayor repeatedly to explain his actions; he has refused to be interviewed. Now, in response to new questions we wanted to ask Nelson, Human Resources Director Jessica Neill-Hoyson has issued a statement.

And until Wednesday, former City Council President Adrienne Fraley-Monillas had also turned down our interview requests.  She finally agreed to talk to reporter Bob Throndsen. He conducted a one-hour phone interview with her. She did not put any limit on what they discussed; all questions were fair game. Their conversation was on the record.

Bob Throndsen:  In recent public statements, you’ve said that you were”‘not aware” of a packet of information sent by Councilmember Vivian Olson to the mayor, the HR Director and all city councilmembers – two days before the Pruitt confirmation vote that highlighted his involvement in two past domestic violence instances; a no-contact order against him, and his then-Marine Corps commander ordering him to domestic violence counseling. Did you read that information?

Adrienne Fraley-Monillas: “I did not read it because we had probably 200 emails sent to us about Chief Pruitt. If this was sent from the city or from HR, I would have given priority to it. Frankly, whether I read it or not, HR knew about the domestic violence; he (Pruitt) disclosed it.”

Throndsen: How do you know that HR knew?

Only after our interview with Fraley-Monillas, did the city, for the first time, confirm those statements to My Edmonds News:

“Chief Pruitt disclosed to the city, before he was appointed, the two situations from his past that he also discussed in his 2009 trial testimony,” said Jessica Neill Hoyson, Edmonds Human Resources Director.

Fraley-Monillas: “Before Vivian (Olson) did the records check, we knew it. It was nothing that was hidden.”

Councilmember Olson has told My Edmonds News that she never knew about the domestic violence issues until she searched for Pruitt’s testimony in a federal court case. In that unrelated case, Pruitt admits to two domestic incidents, to a “no-contact” order against him and to being ordered to 16 weeks of domestic counseling classes when he was in the Marine Corps.

Fraley-Monillas: “I actually read through Vivian’s email; again, I was basing my decision on what HR told me…”

Throndsen: You’re saying you read through the packet?

Fraley-Monillas: “I glimpsed through the packet.”

Throndsen: How did you weigh the domestic violence incidents with Pruitt?

Fraley-Monillas: “That was 20 years ago (that this happened) and seeing that there was no conviction; as long as there wasn’t a pattern. I’m very sympathetic to DV victims. This is something that happened 20 years ago and there were no convictions; people do some silly things when they’re young. I thought about it long and hard. He (Pruitt) did very well with the community groups; they liked him.

“It (the DV incidents) gave me pause, but it didn’t tell me it would disqualify him, for something he was not convicted of, not so much. It should have been up-to somebody to inform us what the disqualifying regulations are.”

The city now says it knew about the domestic violence issues, but did not think they disqualified Pruitt:

“The city administration did not then, and does not now, understand those situations, that testimony, or any other statement that Chief Pruitt made to the city as part of the application process, to constitute an automatically disqualifying admission of domestic violence,” HR Director Neill Hoyson said.

Pruitt was not charged in those incidents. But, in December, My Edmonds News examined the city’s hiring requirements for police officers. Here is what we found:

According to the Edmonds police webpage profile on the national police career search qualifications website, any domestic violence incident, not just a conviction, is an “automatic disqualifier” for any officer seeking a “lateral” move (in this case, chief-to-chief). “Applicants should not apply to our agency (Edmonds police) if they indicate any of the automatic disqualifiers,” the Edmonds webpage notes. Edmonds police say that means “admission of any act of domestic violence as defined by law, committed as an adult.”

Now, according to the city: “At no time did Mr. Pruitt admit to or classify those events from his past as “domestic violence,” Neill Hoyson said. “In neither instance, was Mr. Pruitt charged with domestic violence. In addition, Mr. Pruitt passed a polygraph test which is a standard test that includes all relevant information about the applicant’s past and passed the criminal history background check.”

Again, the Edmonds Police qualifications job website states “any domestic violence incident, not just a conviction, is an ‘automatic disqualifier’ for any officer…”. Neill Hoyson’s letter indicates the city left it up to Mr. Pruitt to decide whether to admit those instances as domestic violence.

The mayor appointed Pruitt to the chief job Dec. 3. The council set a confirmation vote for Dec. 15, then suddenly moved up the vote to Dec. 8. Fraley-Monillas told us she suggested the change.

Throndsen: Why did you do that?

Fraley-Monillas: “It was absolutely not rushing into confirmation; absolutely not. One of the reasons we had pushed that vote up; every step had been taken, every interview done, every group talked to at that point. There was nothing but horrible comments said about the two candidates on email; career destroying comments in social media. I had a discussion with the mayor about why are we waiting another week? There was no reason; either we vote for it or not; confirm or not confirm.

“Mike (Nelson) and I made that decision based; I’m the one that brought it forward, that there was so much stuff going on in social media that was very inappropriate about both of these candidates. Imagine one more week; we had no reason to wait one more week.”

Thronsen: What about the new information brought forward on the 8th?

Fraley-Monillas: “I felt it was being harmful to both of these men to continue; no reasons to hold it, we already knew.“

Councilmember Olson had sent that packet of federal court testimony to HR, the mayor and all councilmembers on Dec. 6. Two days later — on Dec. 8 — Olson, Diane Buckshnis and Kristiana Johnson tried to discuss the Pruitt domestic issues in the council meeting before the confirmation vote.

Their attempt failed; as did their motion to take this information to an executive session, which the council often uses for personnel discussions.

Fraley-Monillas: “I gave them their fourth vote not to go into executive session.”

Pruitt was confirmed on a 4-3 vote. One week later, Mayor Nelson rescinded the offer. His reason: Pruitt had forgotten or neglected to tell HR investigators about a job he had applied for in Lake Stevens. We investigated and discovered the Lake Stevens application had been for a patrol officer job at least 10 years earlier.

We also asked Fraley-Monillas about an interview she did with KING-5 TV news, in which she says on camera “… with all the racism in Edmonds…”. She says that was taken out of context.

Throndsen: How was that taken out of context?

Fraley-Monillas:  “People think I actually said everybody in Edmonds discriminates.”

Throndsen: You did say “with all the racism in Edmonds…”

Fraley-Monillas:  “That was really; he asked me about what the benefit would be of hiring an African-American chief. He (Pruitt) did very well with citizen groups; he’s very friendly. Edmonds has had a lot of problems with racism.

“People ran with it instead of giving me the benefit of the doubt; that wasn’t very fair to me; I’ve lived in Edmonds for 35 years plus. Not everybody in Edmonds is a racist;  a very small percentage, maybe 1 to 2% are racist. I have received some very nasty comments that are threatening because I support Black Lives Matter.”

During a discussion about institutional bias, we also asked Fraley-Monillas about what she recently wrote on a Facebook group page — something that was mentioned during the Jan. 5 city council meeting’s public comment period. Her Facebook post was among dozens criticizing a group that has been circulating a petition asking Mayor Nelson to resign. In her post, she referred to some of petition signers as “that pack of downtown rich white people.” 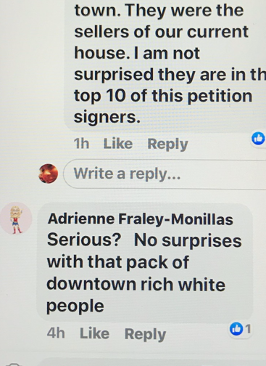 Throndsen: How do you explain what you wrote on this Edmonds Facebook page?

Fraley-Monillas: “I don’t believe that saying somebody is a white person is considered institutional racism or bias; but rich, perhaps.”

Our investigation continues. My Edmonds News has filed a public records request with the City of Edmonds for all documents, emails, texts and materials related to the police chief recruiting, nomination and confirmation. Under state open records laws, the city has said it is working on our filing.