The Edmonds City Council Tuesday night approved a job description for a new social worker position, authorized the city to purchase the assets of the Edmonds Solar Cooperative, and agreed to increase the hourly rate of contract attorneys who fill in for public defenders when they have a conflict of interest.

The council had approved adding a social worker as part of the $500,000 allocated in the 2021 budget for a new human services department. At the top end of the salary range, the social worker would cost the city an estimated $130,000, which includes benefits.

Councilmembers spent quite a bit of time discussing the social worker job duties, and also debated the merits of keeping the job in-house as a staff hire versus contracting with an outside agency to fill the position.

Economic Development and Community Services Director Patrick Doherty explained that the position’s main focus, as written, “is to help at-risk populations within Edmonds who are dealing with issues such as housing stress or homelessness, addiction, mental or behavioral health challenges, disabilities, isolation, among others, while decreasing barriers, providing resources, and finding alternatives to their current situation.” The idea is to have a position “that functions predominantly as a case manager to bridge the gaps left between other social services agencies, providers, law enforcement and/or emergency medical response and the social needs of people within the at-risk population,” he said.

The desired candidate would either have a master’s degree in a related field and two years of experience, at minimum, or a bachelor’s degree and five years of experience. The job description finally approved by the council does not require that the candidate be a licensed clinical social worker, although that licensure is listed as “desirable.” Councilmember Adrienne Fraley-Monillas attempted to add that requirement as an amendment — insisting based on her years of experience in the social services field that it would be critical for that person to be a clinical social worker. Someone with that credential, she said, would be able to immediately prescribe, for example, that a person needing drug treatment be admitted into a rehabilitation program — rather than waiting for approval from someone else with that credential.

“To me it makes absolutely no sense to hire somebody that can’t do the job we want them to do,” Fraley-Monillas said.

Councilmember Vivian Olson countered that such a credential would not be necessary if the city decided to contract with an outside nonprofit to hire a social worker, as that organization would have oversight over those types of arrangements.

“I don’t want us to be locking in to doing it in-house, which would be the only reason we would necessarily need that requirement to be there,” Olson said.

Councilmembers generally agreed that they wanted to keep their options open for hiring the new position — and that meant keeping the wording that a clinical social worker would be desirable but not required.  In the end, Fraley-Monillas withdrew her amendment after it was clear she didn’t have the votes to support that requirement.

Fraley-Monillas also attempted to add a amendment requiring that the social worker be an in-house employee, but that effort died for lack of a second.

The council did agree, however, with Fraley-Monillas’ suggestion that the position description be edited to include a broad range of people served, after she noted that the emphasis now was on addressing homelessness. And based on a suggestion from Council President Susan Paine, councilmembers also asked Doherty to expand on the supervisory responsibilities of the position.

Following a request by Councilmember Laura Johnson, Doherty assured councilmembers they would have another chance to review the job description before any decisions are made about how to fill the position.

As for purchasing the assets of the Edmonds Solar Cooperative, Public Works Director Phil Williams explained to the council that the city’s 10-year lease with the cooperative to have solar panels on the city-owned Frances Anderson Center building roof is expiring. Some of the solar panels have failed over time, and the cooperative is no longer interested in continuing the program. The cooperative offered to sell the equipment — part of which is still operational and generating electricity — to the city for $5,000. As part of the purchase, the cooperative will remove the non-working solar panels but leave the framework in case the city has an opportunity to install new solar panels at a later date, Williams added.

Regarding the approved attorney pay increase, this measure focused on the city’s use of conflict counsel — attorneys who fill in for the city’s public defenders when they have a conflict of interest with a case. For many years, that pay has been $50 an hour,which is very low when compared to how much those same attorneys can make doing other work — in some cases $300 an hour.

Presenter Robert C. Boruchowitz, assessor for Public Defense Services, recommended the council raise the rate to $125 an hour, and had proposed the city could phase in the increase over time if necessary. Councilmember Kristiana Johnson proposed the council do just that, with a $25-per-hour increase annually spread over three years. That idea was rejected on a 1-6 vote (K. Johnson the only one supporting) and ultimately councilmembers agreed 6-1 to increase the hourly rate from $50 to $125 (K. Johnson opposed).

– Received the 2020 annual report from South County Fire and Rescue, which contracts with Edmonds to provides fire and emergency medical services. Fire Chief Thad Hovis and staff addressed the impact that COVID-19 had on operations in 2020 — from taking additional safety precautions while responding to medical calls to working closely with senior living communities. That effort carried into 2021, as South County Fire — along with 22 other Snohomish County fire agencies — assisted with several drive-thru and mobile sites for COVID-19 vaccinations. As of Feb. 15, South County Fire teams had vaccinated 132 residents and staff at 23 adult family homes in Edmonds.

The report also included the agency’s emergency response metrics for Edmonds in 2020. Among the most notable: Total fire and EMS incidents were down in 2020 — a statistic also seen by other fire agencies due to stay-at-home measures required by the pandemic, and response times are longer due to COVID-19 safety protocols. Fire officials promised that councilmembers would have an opportunity to delve further into the statistics when the South County Fire commissioners and councilmembers hold a joint meeting in the near future. 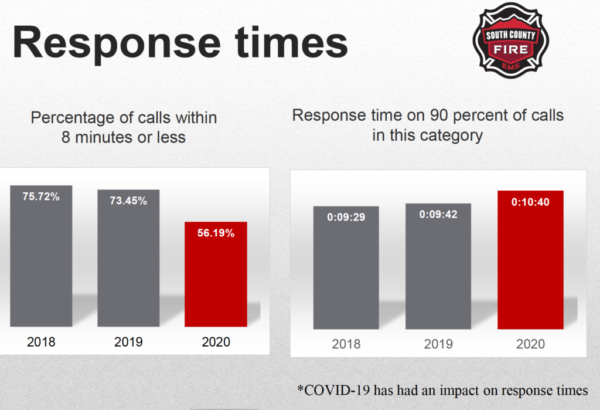 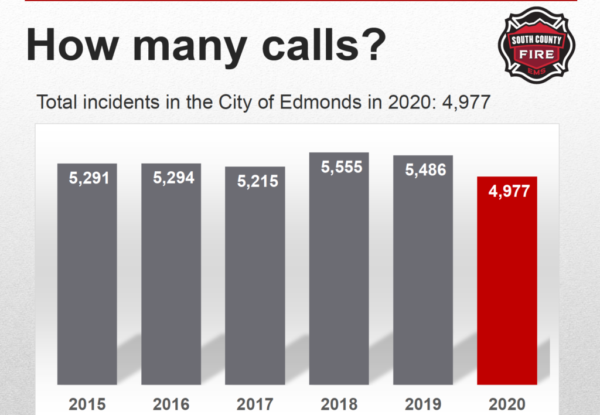 – Heard a presentation on the city’s climate action efforts. This included a report from Development Services Director Shane Hope on the city’s work — with the help of a consultant — to update the city’s Climate Action Plan in 2021. The city sponsored a virtual open house Feb. 18, and plans to conduct a workshop and online survey in March. The Climate Action Plan update will identify actions the city needs to take and methods for measuring progress in reducing greenhouse gases, Hope said. Related to this, the council heard an annual report from the Mayor’s Climate Protection Committee, which serves in an advisory role to further public education about climate issues.

– Approved an interim zoning ordinance that permits short-term leases between the city and Edmonds’ Driftwood Players and the Arts Festival Foundation for space the two organizations rent in the Edmonds Old Public Works building at Second and Dayton. This interim action will allow the city to continue to rent the space while resolving a recently discovered zoning conflict with the current building usage.