There is reason for optimism this week in the worldwide battle against the coronavirus as critical metrics continue to go down for the third week in a row. But this is tempered by a stern warning from experts that the emergence of new mutant variants has the potential to wipe out these gains.

The COVID Tracking Project has been reporting on the pandemic from the start, and sums it up as follows:

“The good news…continued this week, as new cases, hospitalizations, and deaths all dropped. For the seven-day period running January 28 to February 3, weekly new cases were down more than 16 percent over the previous week, and dropped below one million for the first time since the week of November 5.  This is still an astonishing number of new cases per week, but far better than the nearly 1.8 million cases reported on the week of January 14.”

In other good news, the U.S. reached a major milestone this week, with the number of people having received at least one dose of COVID vaccine outnumbering the total U.S. caseload since the start of the pandemic a year ago.  As of Monday, the CDC reports that 31.6 million Americans, 10% of the U.S. population, have received at least their first dose of the vaccine. Seniors 65 and older comprise the majority of those vaccinated. This compares with the latest U.S. total case count of 27.1 million. See more details below in our charts section.

With a growing number of people having received the first vaccine dose, experts continue to stress the importance of following through and getting the second dose on schedule, pointing out that the fewer individuals available for the virus to infect, the slower the spread and the less chance of new mutant strains emerging that may be more virulent and vaccine-resistant.

Dr. Anthony Fauci said yesterday that while the “current vaccines are quite effective” against the U.K variant, “people need to follow through and get the second dose,” saying that this is, “important to help keep the virus from mutating.”

The U.K variant, the first mutant strain be identified and tracked, continues to spread and is now in more than 30 U.S. states. One study released this week, that has yet to be peer-reviewed, reports that infections from this variant are doubling every 10 days, and that it will become the dominant strain here by March. See which strains are in which states in this map from NBC news.

The recent emergence of the new South African strain provides a troubling example of what we don’t want to happen. This mutant is proving very resistant to at least one vaccine, the AstraZeneca, prompting South African officials yesterday to suspend rollout of the AstraZeneca vaccine, saying that it provides “minimal protection” against this new variant. The AstraZeneca vaccine is not being administered in the U.S., and only six cases of the South African strain have been reported here. For more information on this and other coronavirus variants, see this report from USA Today.

While supply problems continue to hamper vaccine rollout, the expected approval of a new single-dose vaccine from Johnson & Johnson combined with Pfizer’s announcement Monday that it is speeding up its production timeline from 110 days to 60, the prospects for getting more vaccine into the pipeline are looking up. In light of this, President Biden predicted yesterday that we should have enough vaccine by the end of the summer to administer 300 million double shots, enough for all Americans who want to be vaccinated.

Here in Washington the vaccination rate continues to rise, as supplies slowly become more dependable and additional vaccination sites open. Snohomish County officials told reporters in a Tuesday press briefing that it plans to administer 21,000 doses in the coming week, 10,000 first shots and 11,000 second shots.  But according to County Health Officer Dr. Chris Spitters, this is still far from the 45,000 that could be administered every week if sufficient supplies of vaccine were available, adding that the population now eligible for the vaccine is 10 times higher than the number of shots available. The briefing also touched on the issue of school reopenings and the likelihood of reverting to earlier reopening phases under Gov. Inslee’s Healthy Washington plan. Read our full coverage of the press briefing here.

Three drive-through vaccination sites are now open in Snohomish County — the Arlington Airport, Edmonds College and the Monroe State Fairgrounds, and there is also a mass indoor vaccination site at the Boeing Activity Center. For more information and to check on availability for these sites, click here.

Information on where to get vaccinated, how to set up an appointment, and general information on vaccine types available, and more may be found here. A list of all vaccination sites statewide is available here.

Use the state’s phase finder tool at http://findyourphasewa.org to determine your eligibility to be vaccinated. Once you become eligible, appointments at the various clinics can be set up at the appointment booking website.

In other developments, the new public health measures outlined in Gov. Inslee’s Healthy Washington plan continue. The plan divides the state into multi-county regions, all of which were initially in Phase 1, the most restrictive category. Unlike the former Safe Start program, these groups do not need to apply to advance to a less restrictive stage – this is now determined by data collected and compiled by the State Department of Health. Last week, two regions – Puget Sound and West – were approved to move into Phase 2. Details of how the guidelines apply to various businesses and other groups are available here.  See more in the Washington State Situation section of this report below.

To help you, our readers, stay updated on the continuing battle with the pandemic, here once again are the latest numbers, charts, and statistics from the world to our own backyards.

This week’s global COVID case count as reported by Johns Hopkins University shows declining numbers across the board with just shy of 3 million additional cases, down from almost 4 million last week.  The weekly death count has fallen below 100,000 for the first time since fall, adding 84,000 since last week’s count. The United States case count dropped for the fourth week in a row, with 727,000 new cases added, down from 1 million last week and 1.2 million the week before. The U.S. total now stands at more than 27.1 million since the start of the pandemic, with 465,000 deaths. Despite the second week of slowing increases, the U.S. continues to lead the world in both these measures. 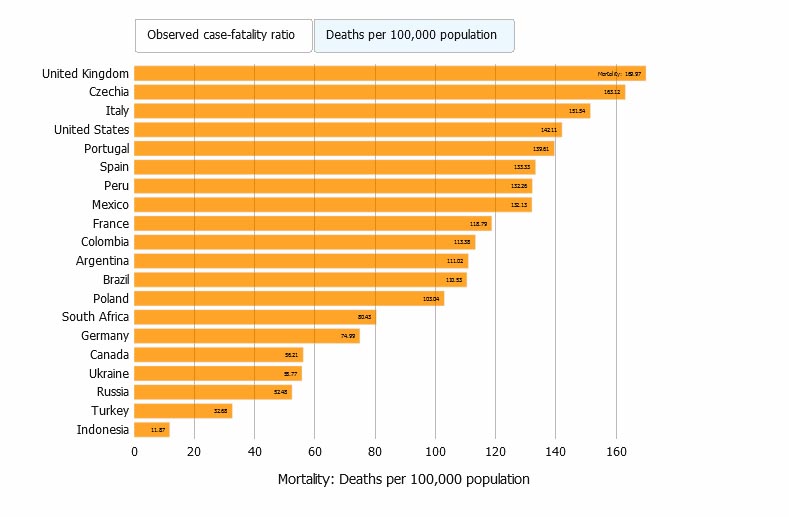 Overall trends since April 2020 in the United States are summarized in the charts below from the COVID Tracking Project.  Note that these reflect the trend of declining numbers across the board. 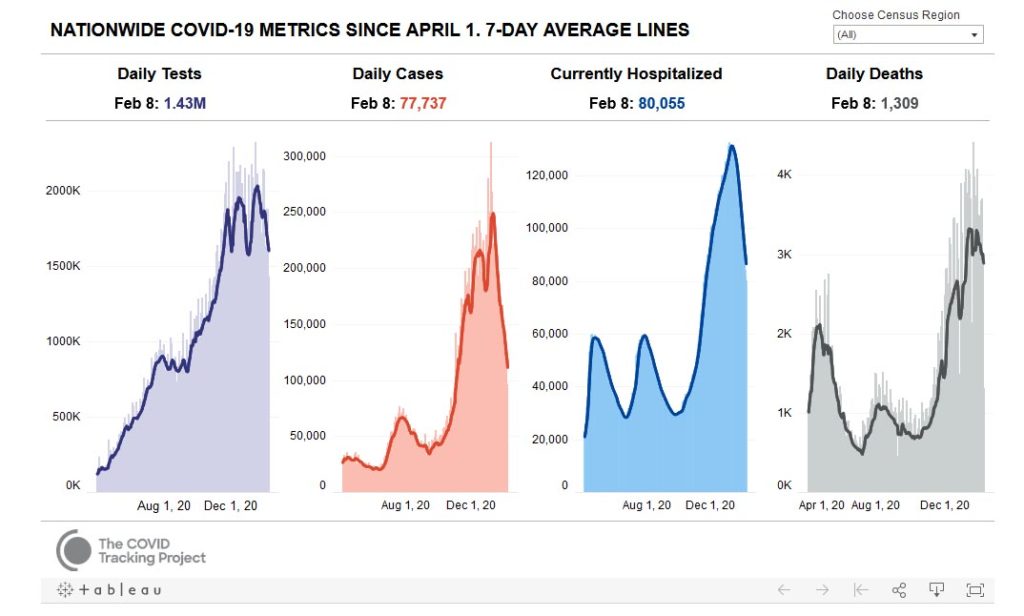 Statewide, the numbers have leveled off slightly this week. The most recent (Feb. 7) state overview from the Washington Department of Health shows the confirmed case count at 307,189, gaining just shy of 7,000 compared to last week’s count of 10,150. Deaths now stand at 4,451 compared to 4,318 last week. 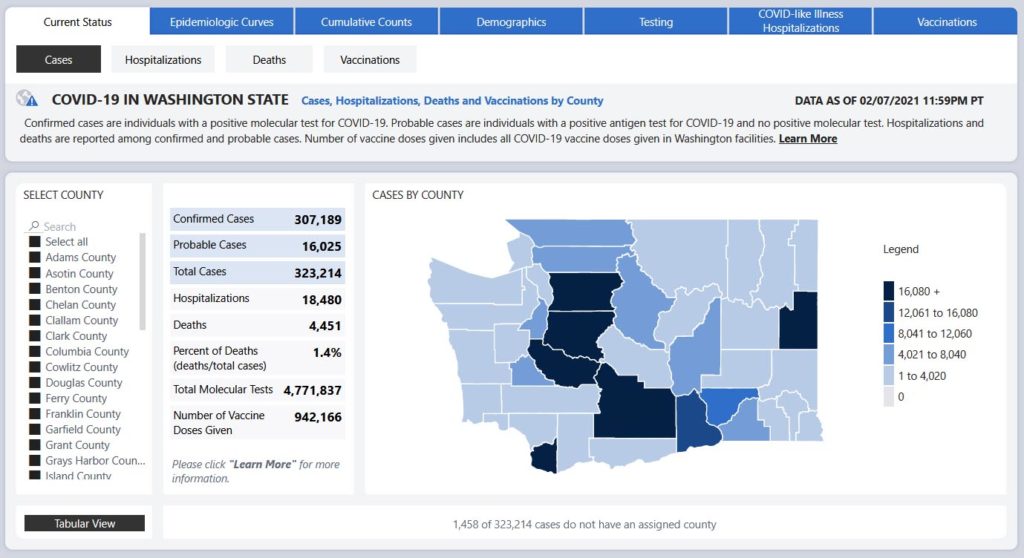 The statewide daily new case count as of Feb. 7 continues to back off from the Dec. 11 high of 4,111 as shown in this chart from DOH, and continues the declining trend begun three weeks ago. Note that here – as with all DOH charts – the grey bars indicate data that are incomplete and still being tabulated. 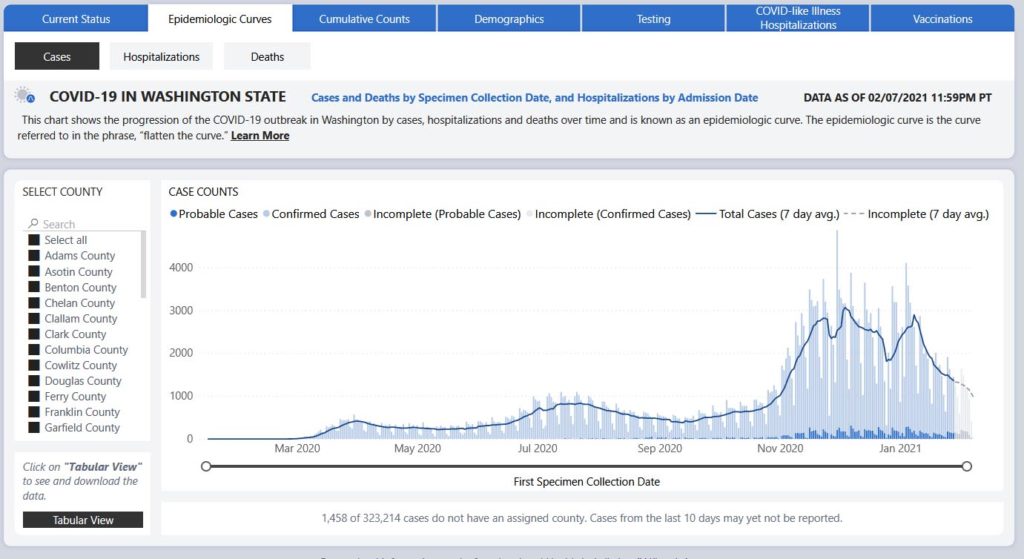 The Feb. 7 case rate of 273.1 (cases per 100K population, two-week rolling average) continues to plummet, down 64 points from the previous week’s rate of 337.5, but remaining well above the state goal of 25. 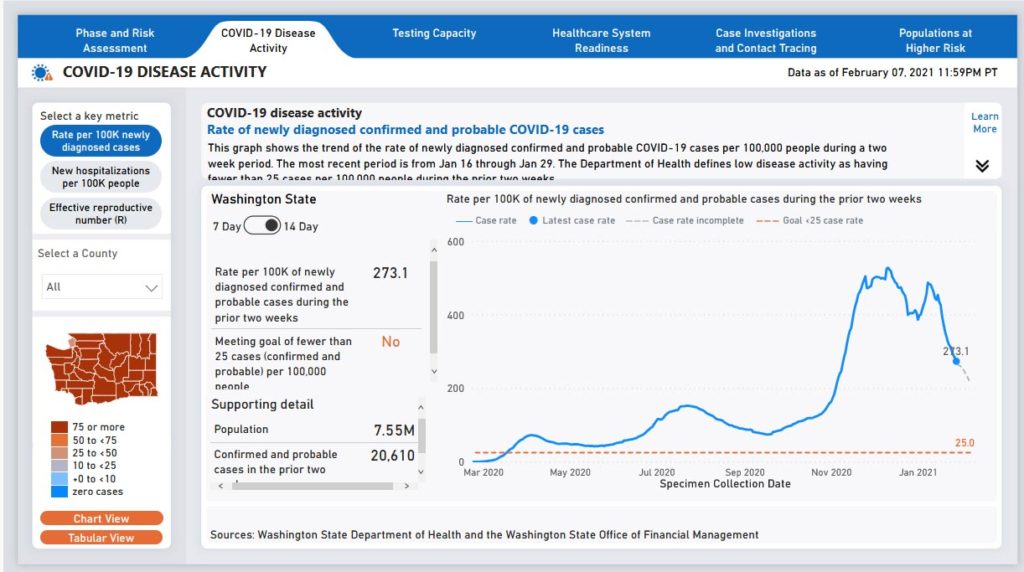 Trends in Washington State’s daily hospitalization and death counts continue to predictably lag the case count trends as they reflect the general improvement in key metrics. As above, the grey bars in both charts posted Feb. 7 are based on incomplete data (according to DOH lagging as much as 18 days for hospitalizations and three to four weeks for deaths). 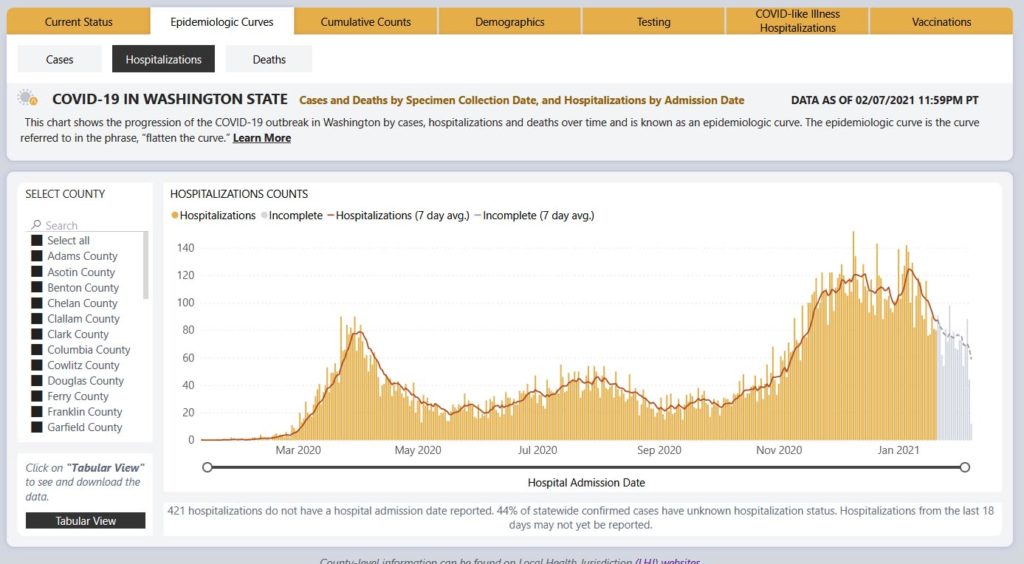 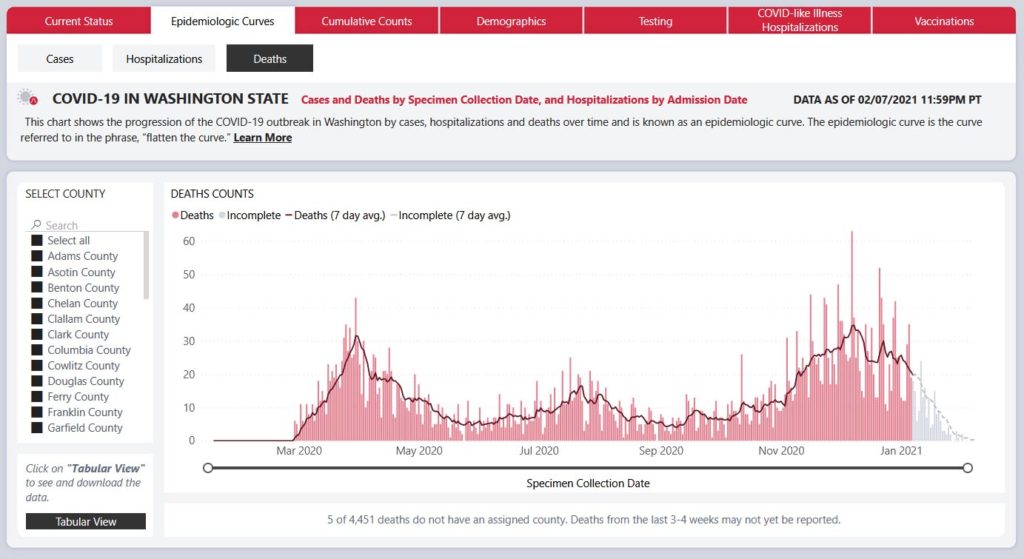 The latest Roadmap To Recovery report shows only two regions – Puget Sound and West – currently in Phase 2. The rest of the state remains in Phase 1.

Four metrics are considered in determining the phase for each region:

Snohomish County is grouped into the Puget Sound region along with King and Pierce counties.

The table below shows how the various regions stack up at the most recent (Jan. 28) determination. The next set of measurements will be compiled on Feb 12 for implementation and possible phase re-assignment on Feb. 15. 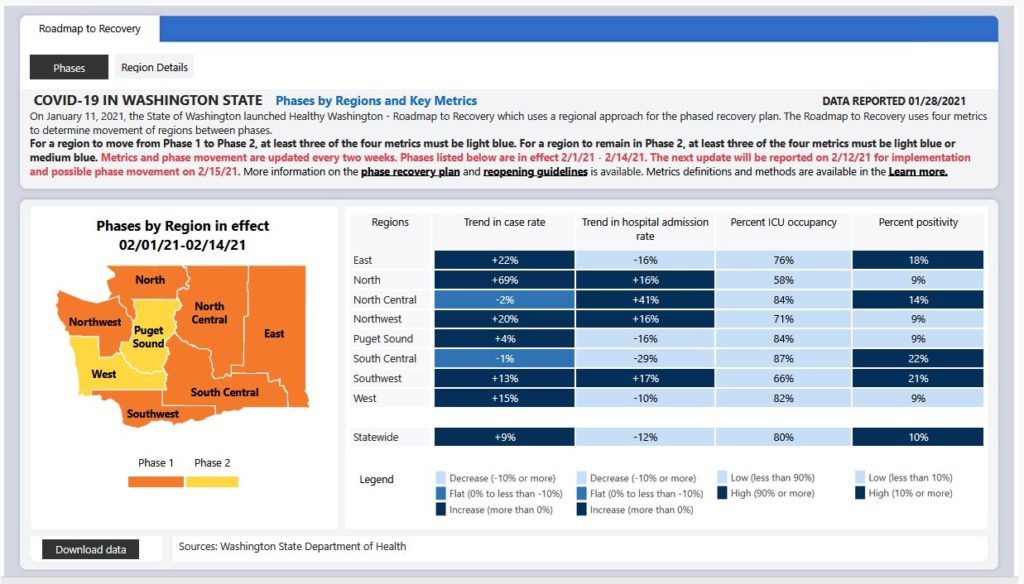 Vaccination activity continues to ramp up as Washington works to overcome initial startup challenges. The Feb. 2 report shows the sven-day average at 26,857 doses per day, down a touch from 28,115 last week and still short of Gov. Inslee’s 45,000-dose daily goal. Statewide, almost 950,000 doses have been administered to date, with just shy of 10% of the population receiving at least the first shot. 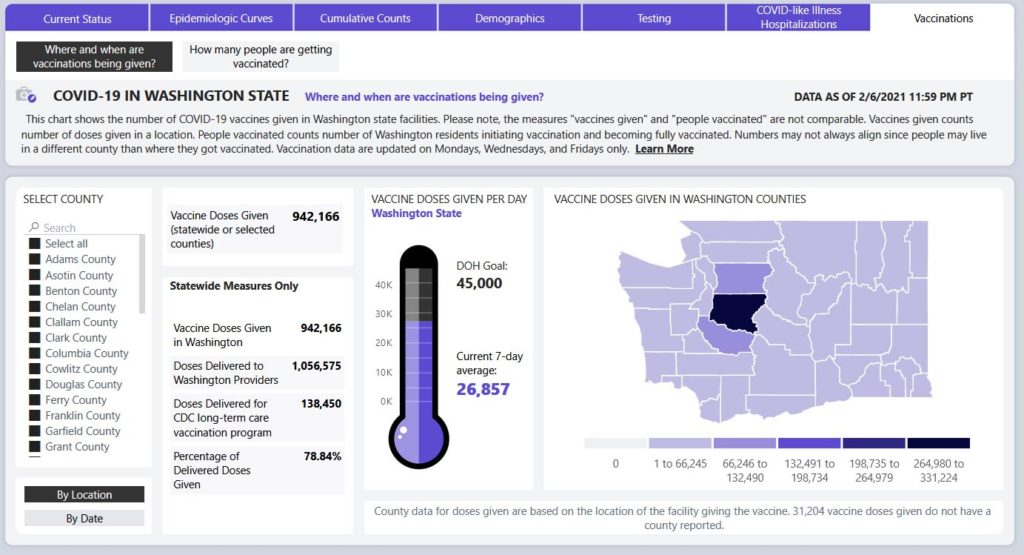 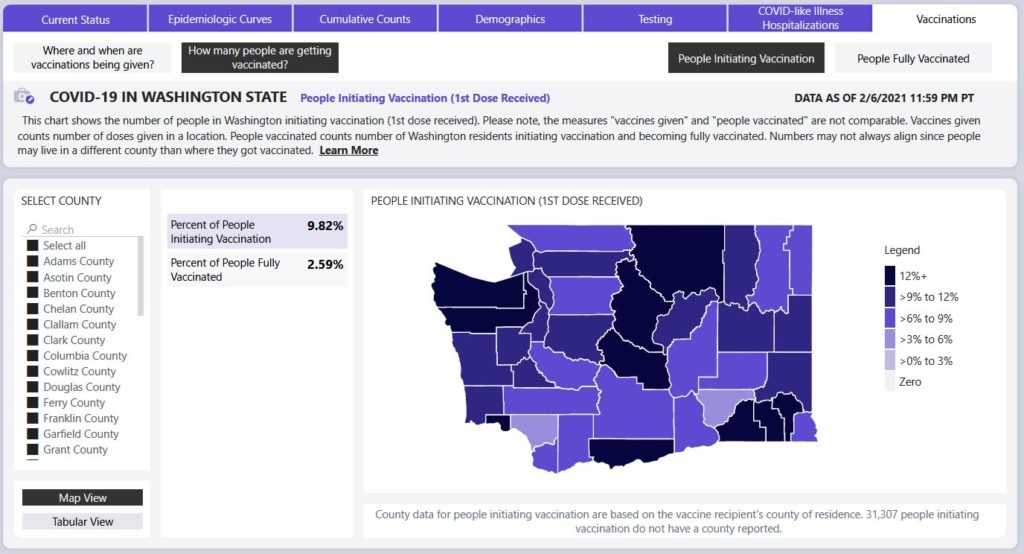 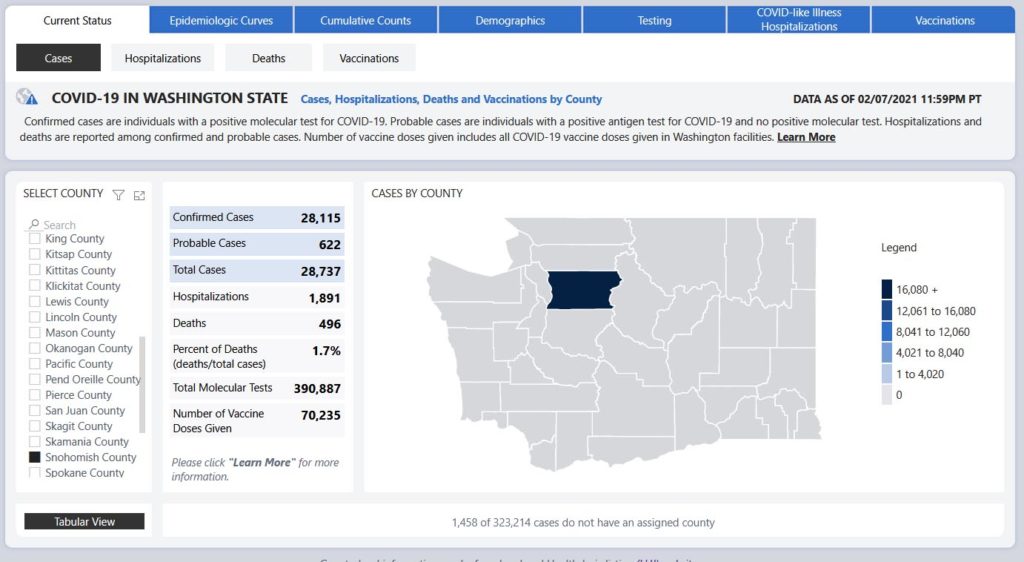 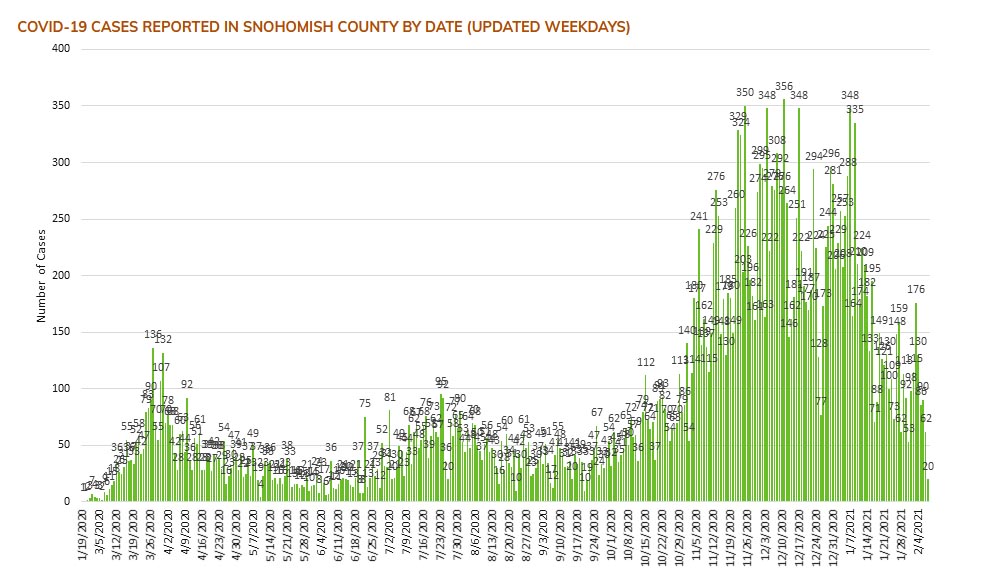 Vaccination activity in Snohomish County shows 70,712 total first doses and 14,979 total second doses administered as of Feb. 8. More information on how the program works and how to get vaccinated is available here. 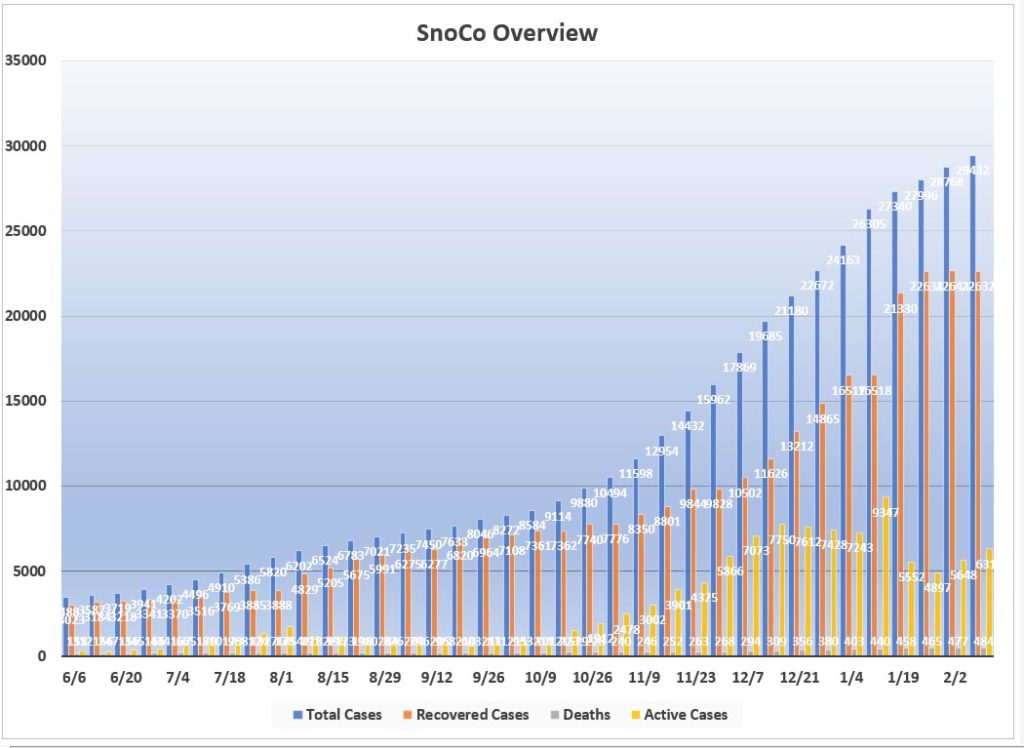 The two-week rolling average case rate per 100,000 from the Snohomish Health District is down significantly for the third week in a row, showing 173 new cases per 100K, down from 178 last week. 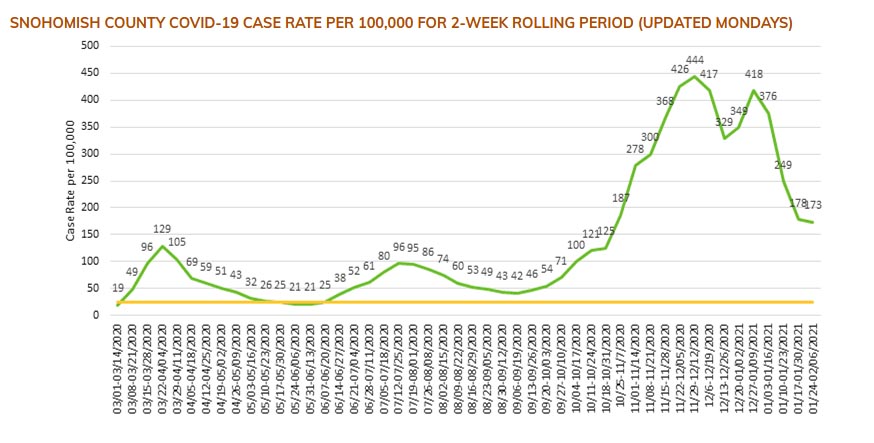 The mortality trend for Snohomish County (numbers through 1/30) continues to drop from the steep increases of December. 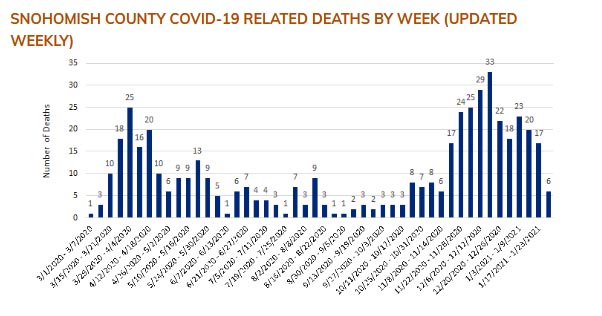 Note:  This week’s data for total cases and recovered cases are taken from the most recent Snohomish Health District Snapshots and Reports webpage. While these two counts are reported weekly, death numbers are reported biweekly in the Health District’s Detailed Update Report. Because these are not reported this week, we have used the previous week’s death figures as placeholders.  We will update the data in next week’s report. 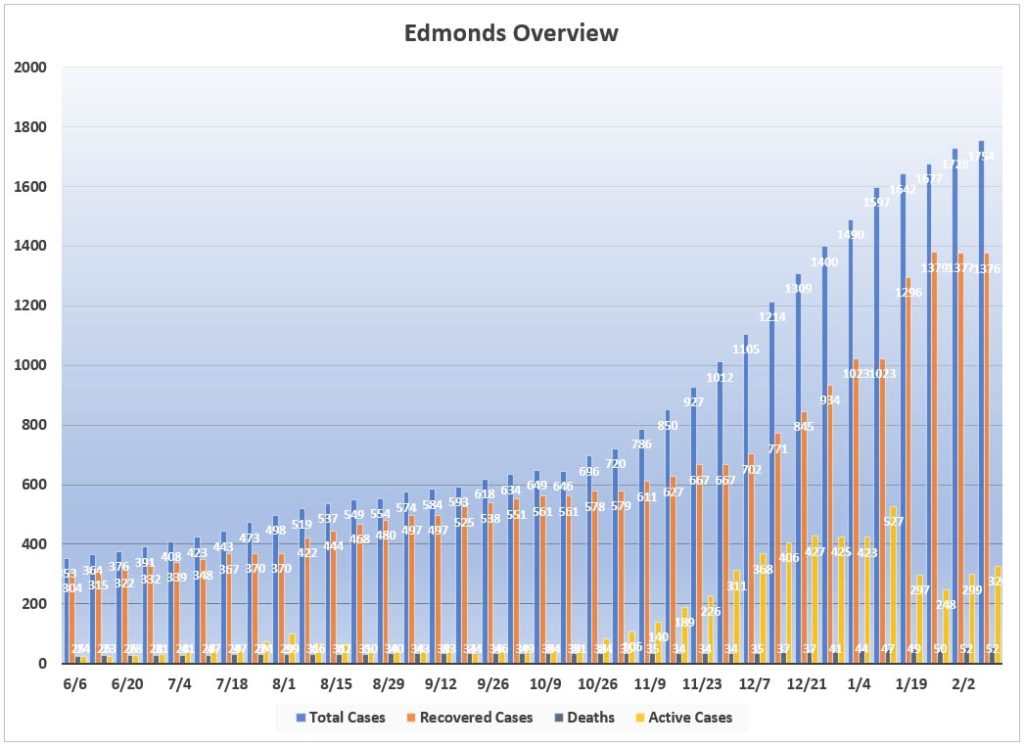 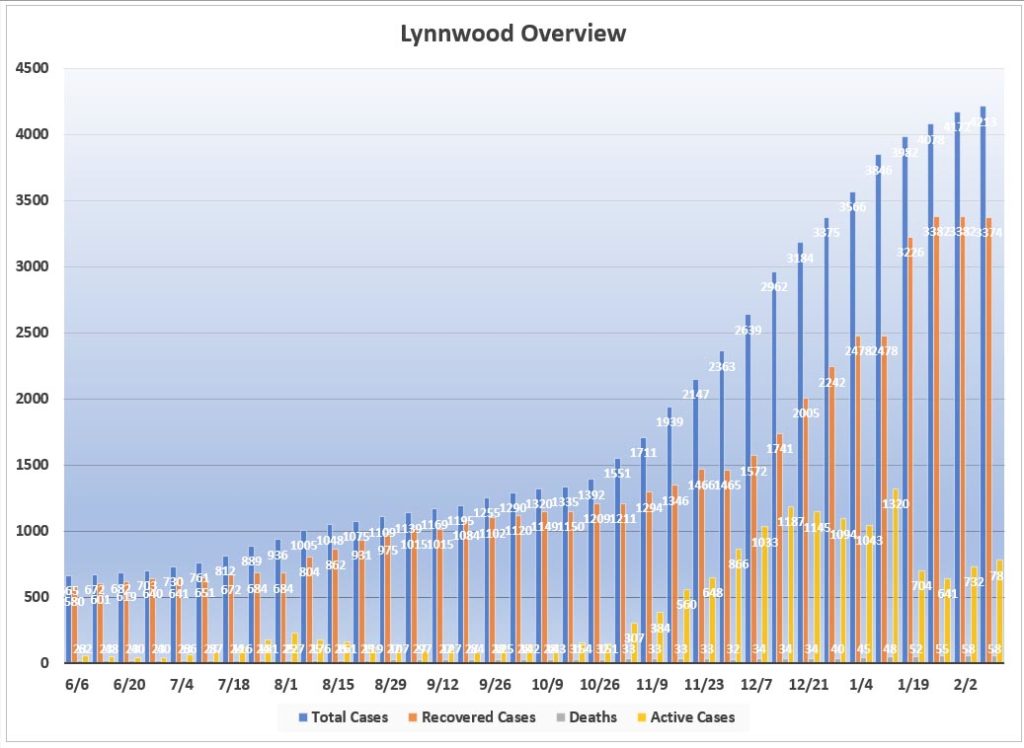 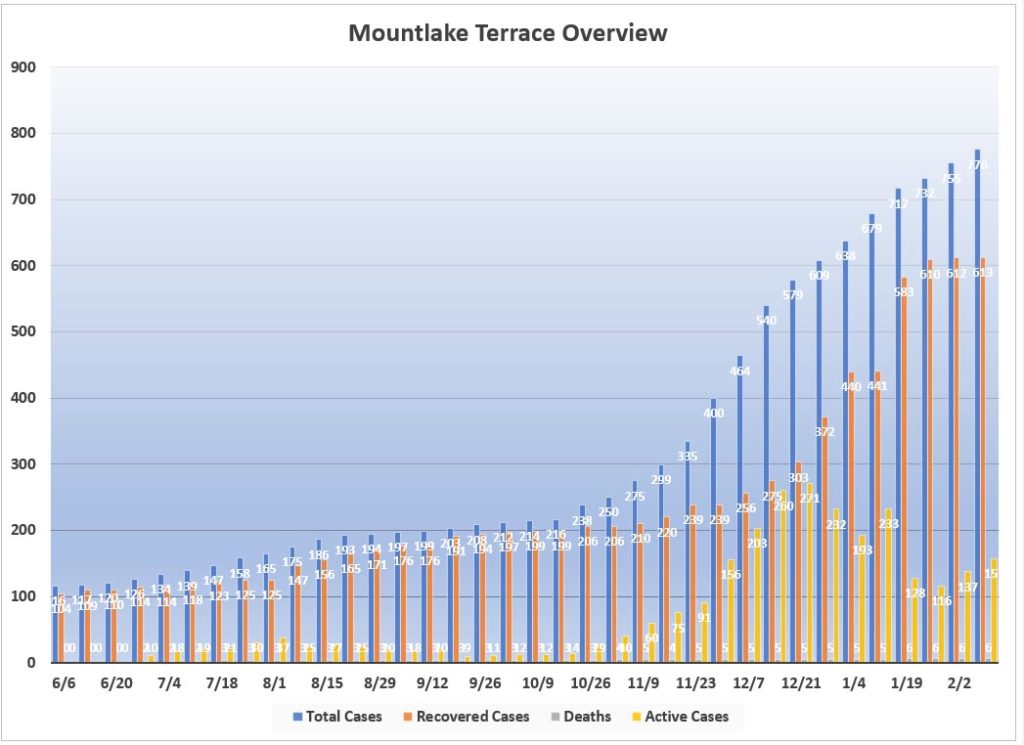 The local numbers summary as of Feb. 8 shows declining numbers of recovered cases as data are trued up. Note again that because death numbers for individual cities are now reported biweekly, we have used the previous figures as placeholders. These will be updated in next week’s report.