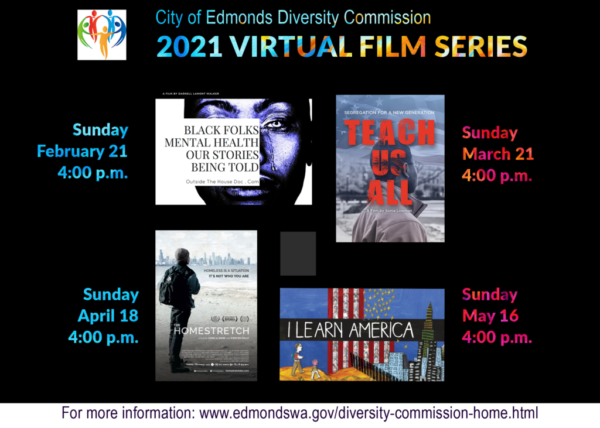 After two successful virtual screenings in October and November of 2020, the Edmonds Diversity Film Series resumes its fourth season this month, with the next screening scheduled for Sunday, Feb. 21 at 4 p.m. via Zoom.

Screenings will be offered free to the public and are scheduled for the third Sundays of the month, February through May. Each screening presents a film, or films, related to different topics or groups representing diverse populations and experiences. After each screening there is a brief opportunity for comment and dialogue. And due to the virtual platform, we are fortunate that several of the films’ producers, writers and/or actors will be able to join the Zoom for the comment and question periods.

February’s film is Outside the House by Darnell Lamont Walker. This film has been called a kind of therapy. It is brave men and women sharing their stories, pains, truths, and struggles as they deal with mental illness, showing others they are not alone. Walker will be joining the Zoom for a Q&A after the filming. Trigger warning: language, abuse and other difficult topics. The film may be previewed at: http://outsidethehousedoc.com.

Teach Us All – Elevating Equity in Education for Every Student is March’s film, screening on March 21 at 4 p.m. Produced by the Lowell Milken Center for Unsung Heroes, Teach Us All is a documentary and social justice campaign on educational inequality set against the backdrop of the 1957 Little Rock school crisis. Sixty years after the Little Rock Nine faced violent resistance when desegregating Central High in Arkansas, America’s schools continue to represent the key battleground of the Civil Rights Movement. Teach Us All demonstrates powerful lessons from history within a timely context, emphasizing the need for unity and collective action to rectify the disparities among America’s children. The Teach Us All social justice campaign seeks to build the capacity of students and educators to take leadership in carrying forth the legacy of the Little Rock Nine while activating broader community engagement in today’s urgent need for educational equity. Teach Us All is written and directed by Sonia Lowman.

On April 18, the series presents The Homestretch, a film that follows three homeless teens as they fight to stay in school, graduate, and build a future. Each of these smart, ambitious teenagers – Roque, Kasey and Anthony – will surprise, inspire, and challenge audiences to rethink stereotypes of homelessness as they work to complete their education while facing the trauma of being alone and abandoned at an early age. Through haunting images, intimate scenes, and first-person narratives, these teens take us on their journeys of struggle and triumph. As their stories unfold, the film connects us deeply with larger issues of poverty, race, juvenile justice, immigration, foster care, and LGBTQ rights. By Anne de Mare and Kristen Kelly. The film may be previewed at: www.homestretchdoc.com/trailer

The May 16 film features I Learn America by Jean-Michel Dissard and Gitte Peng. At the International High School at Lafayette, a Brooklyn public school dedicated to newly arrived immigrants from all over the world, five teenagers strive to master English, adapt to families they haven’t seen in years, and create a future of their own while coming of age in a new land. Through these five vibrant young people, their stories and struggles, and their willingness to open their lives and share them with us, we “learn America.” Jean-Michel Dissar will be joining us for a Q&A after the film.

Additional information about the films is available at diversity.edmondswa.gov