A group of citizens joined city officials and project consultants remotely Thursday evening for the Highway 99 Corridor Project open house to learn about and provide feedback on a host of planned improvements — all aimed at enhancing safety along the corridor.

“The big goal of this project is to reduce vehicle crashes on the stretch of Highway 99 between SR 104 and 210th Street,” explained City of Edmonds Traffic Engineer Bertrand Hauss as he opened the meeting.

The Highway 99 corridor includes a two-mile stretch through Edmonds and the land area around it. Parts of this corridor border on the jurisdictions of Shoreline, Lynnwood, Mountlake Terrace and unincorporated Esperance. (See accompanying map).

The Highway 99 Subarea Plan, completed in 2017, focused on a community vision and approaches for making long-term improvements to land use and transportation, with an eye to retaining the positive characteristics of many parts of the corridor.

In August 2017, the Edmonds City Council passed ordinances to adopt the Highway 99 Subarea Plan and Planned Action EIS. The city is working with consultant SCJ Alliance to design how the corridor will look and feel in the future.

In 2017 and 2018, the city worked with SCJ Alliance to complete the Highway 99 Gateway – Revitalization Stage 1planning project. This culminated in the development of conceptual plans and construction cost estimates for the redevelopment of Highway 99 from 244th to 210th Streets Southwest.

In spring 2020, the city and SCJ Alliance developed plans for the Highway 99 Gateway-Revitalization Stage 2 project. This project is aimed at designing the improvements described in the Stage 1 plan, including a raised center median for access management, a pedestrian crosswalk just north of 234th Street Southwest possibly controlled by High Intensity Activity Crosswalk (HAWK) signal, and gateway signage at the northern and southern entry points to Edmonds.

For additional project history and details, refer to the Highway 99 Corridor webpage.

The plans presented Thursday provided the latest maps, diagrams and timelines for public comment and discussion.  The complete set of plans presented is included in the open house PowerPoint.

“Accidents happen all along this corridor, at both signal-controlled and non-controlled intersections,” said Hauss as he presented a table showing accident history and severity levels along this stretch of highway. “Every one or two days there is a crash somewhere along the corridor, totaling more than 200 each year with many involving serious injury.”

Central to the plan is eliminating the present two-way left-turn lane in the center of the roadway and replacing it with a landscaped median, which will include left-turn pockets at intersections and mid-block locations. In almost all cases, these pockets will also allow for U-turns.

Pointing out that the current design and traffic flow patterns of the highway contribute to the safety concerns, Hauss provided several examples. Among these are situations where motorists leave a “courtesy gap” for vehicles attempting a left turn across traffic from the present two-way center left-turn lane. But due to blocked lines of sight, motorists in the far-right lane are often unaware that a vehicle is about to cross their path.

“The motorist in the right lane can be traveling at up to 50 mph, and be totally blind to the left-turning vehicle,” Hauss explained.  “While it will not eliminate all potential points of conflict, the proposed median with left-turn pockets reduces these significantly.”

While this means that motorists may have to go a block or two out of their way to make a U-turn and circle back to their destination, it makes for smoother, safer traffic flow and eliminates many points of potential vehicle/vehicle conflict.

“By reducing and controlling the number of places where left turns can be made, the median means fewer conflict points along the entire stretch,” added SCJ planner Lisa Reid.  “Two-way left turn lanes are like sandpaper to traffic, creating conflicts.”

The median width will vary depending on location, with the wider areas raised to 18 inches above the roadway and landscaped with shrubs and small trees placed approximately 30 feet apart. The median will narrow as it approaches intersections, where the landscaping will give way to hardscape and curbs rising 6 inches above the roadway; it can then feed into designated left-turn pockets.

“The size of the left-turn pockets is determined by both present and projected traffic flow volumes,” explained Reid.  “Busier intersections such as 220th Street will have larger pockets, others will have smaller ones.”

In addition to the median, project plans call for a pedestrian crosswalk signal to be located approximately 600 feet north of the 234th Street intersection to provide a safe pedestrian crossing along the uninterrupted stretch of highway midway between the 238th Street and 228th Street signalized intersections.  The plans call for this to be staggered through the median, so as pedestrians cross, they are forced to jog right in the median before making a left to continue crossing the remaining roadway.

“This forces the pedestrians to actually face the oncoming traffic from the safety of the median,” explained Reid.  “Rather than simply proceeding straight across, this helps pedestrians remove themselves from distractions such as cell phones and gives the opportunity to mentally assess the speed and condition of the oncoming traffic before proceeding across the remaining roadway.”

The team is considering using a HAWK (High Intensity Activated Crosswalk Beacon) signal for this crossing, similar to the signal installed in 2015 along SR 104 adjacent to City Park.

Other features included in the plan are gateway signs at either end of the corridor identifying the jurisdictional boundaries of Edmonds.  These are currently in the design process and will be available for public review and comment at a later date.

Upcoming steps include completing the design work which will include final plans for the pedestrian crosswalk and gateway signs, and additional design modifications and fine-tuning of the details of median and frontage improvements.

“Right now we’re at about 30% design, with additional work coming in the next few weeks,” said Hauss. “Our goal is to complete the design work this fall, and to advertise for bids in the October-November timeframe. Look for another open house with the project construction team before the end of the year. If all goes as we hope, construction could start in early 2022.” 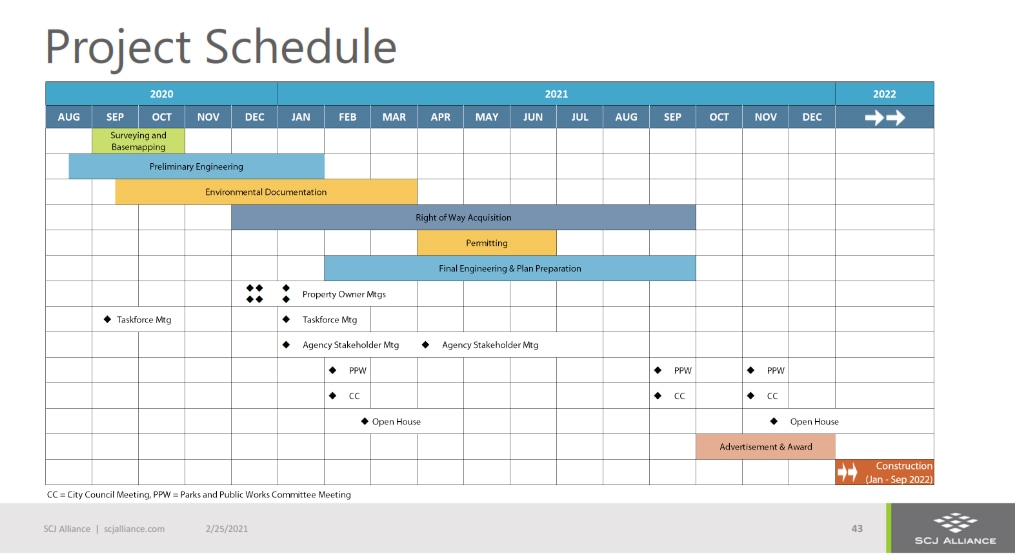 Questions from the audience began with financing, with one participant asking the size of the budget and how the project is being funded.

“The project will be paid for with $10 million in funding we have already secured from the state through Connecting Washington,” explained Hauss.  “This is more than the total project costs, so no additional funding will be needed.”

One business owner asked if there will be a process for appealing where the left turn lane will be located, to which Edmonds Public Works Director Phil Williams responded that these remain to be finalized, and that “this is why we’re having meetings like this.”

Another participant asked specifically about whether the left turn lanes at 238th will be maintained should the Safeway close, to which Lisa Reid answered that they would.

A business owner who also operates in Shoreline expressed concerns about ongoing maintenance to the landscaped medians, pointing out that in Shoreline some have become overgrown to the point where they block clear lines of sight for traffic, specifically for U-turners.

“We’re developing a plan for that,” responded Phil Williams.  “We’re aware of the struggles that Shoreline has faced with maintenance, and we are working with our parks department to ensure that we’ll have a well-maintained median. It’s worth the additional effort and investment.”

A related question asked about whether an irrigation system would be part of the plan, to which Lisa Reid responded that plants are being chosen for drought hardiness, and once established should require no ongoing irrigation.

A citizen asked about whether the city will be involved in managing construction, or if it will primarily be up to the contractor.  Hauss answered, saying that both the city and the SCJ design team will be involved in monitoring, and that there will be a single project manager who will shepherd the project throughout its course.

A related question asked about the sequence of construction, inquiring whether the project will start at one end and move toward the other, to which Williams replied that these issues will need to be worked out with the successful construction team once they have been selected.

Final questions concerned accommodations for bicyclists, to which the Reid responded that many sections of Highway 99 simply will not have room for a multi-use path and hence will not be compatible with bicycle use, and the hope is that cyclists can be mostly diverted to the adjacent Interurban Trail.