The City of Edmonds plans to begin construction next year on an initial set of upgrades to the 2.4-mile stretch of Highway 99 running through the city — the start of a long-term effort to renovate the entire corridor.

The Edmonds City Council heard an update on the project during its Tuesday night meeting. The council also again discussed the elements of the draft tree code, but decided to take another couple of weeks to review it and request further staff changes prior to possible approval.

Making the two miles of Highway 99 through Edmonds a safer place for both pedestrians and drivers has been a key component of the city’s plan, approved in 2017,  to revitalize the roadway — which runs from 244th to 210th Streets Southwest — and nearby neighborhoods. But with federal grant dollars to cover the project’s estimated $184 million price tag hard to come by, the city has decided to focus on installing landscaped medians along the entire centerline to improve both safety and aesthetics, at an estimated cost of $8.15 million. The project would also include a pedestrian-activated HAWK signal at 234th Street Southwest.

Design work is scheduled to be finished this fall, with the goal of starting construction in 2022.

Edmonds had already received a $10 million allocation from the Washington State Legislature for the entire Highway 99 project scope — to be provided during the 2021-23 biennium — although in 2017 the city got a $1 million advance on that money, which was used to begin design work. Revitalization of the entire Highway 99 corridor could take as long as 15 years, with various aspects of the project completed in segments.

Overall, the Edmonds project would be similar to the City of Shoreline’s Aurora Corridor Project, completed in 2017.

“There’s a crash somewhere in the corridor every other day,” Haus said. “It’s actually one of the highest in the state for similar state routes and there’s actually a lot of serious-injury collisions.” 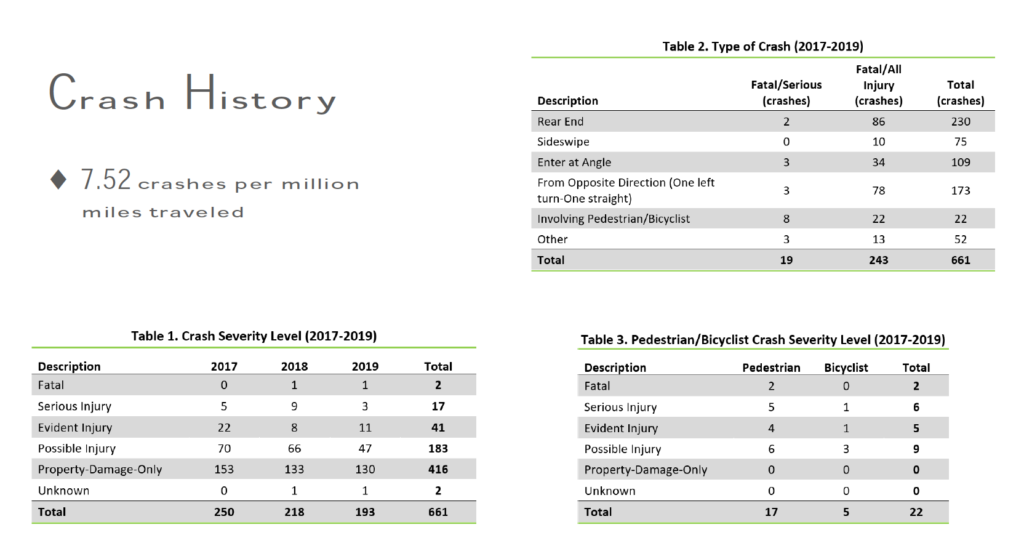 Data collected from 2017-19 and shared with the council Tuesday night showed there were a total of 661 vehicle collisions from 244th Streets to 212th Streets Southwest during that three-year period. A total of 419 involved only property damage, while the remainder included some level of injury. There were two fatalities.

Reid then described the proposed improvements for this project stage: A raised landscaped median along entire corridor “to provide access control,” with mid-block left turn pockets; a pedestrian-activated crosswalk signal just north of 234th Street Southwest; and Gateway “welcome” signs on each end of the city limits.

The third element, the Gateway Signs, have not been designed and will be coordinated with a public task force, Reid said. 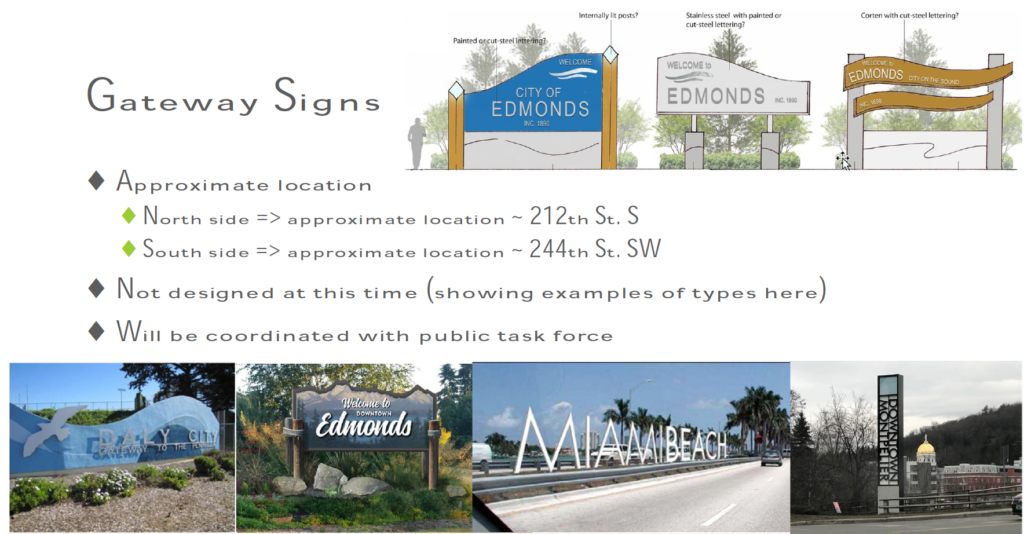 Reid also provided the council with a summary of left- and U-turn locations planned for the project. Left turns and U-turns will be allowed at all seven signalized intersections — 244th, 238th, 228th, 224th, 220th, 216th and 212th — and at all non-signalized intersections except 76th Avenue West, where there is an existing raised median. Midblock turns will be allowed in areas that meet spacing requirements and other standards. 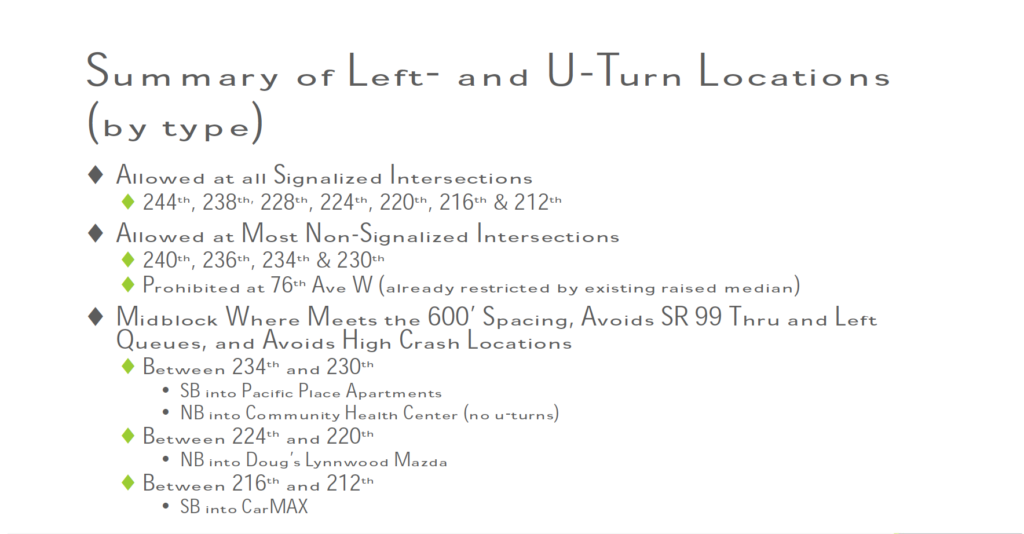 Studies have shown that access controls such as those planned for Highway 99 reduced the vehicle crash rate about 37% and the injury rate about 48% compared to a two-way left-turn lane, Reid said. Pedstrian-related crashes are lowered 45% and pedestrian fatalities 78%, she added.

In terms of impacts to merchants, “there’s no impact on the demand for goods and services,” Reid said, adding that a majority of drivers have no problem making U-turns to get to businesses on the opposite side of the road.

Transportation Engineer Haus said the city has also been talking with the Washington State Department of Transportation about possibly reducing the speed limit by 5 or 10 mph on the Edmonds portion of Highway 99 after the project is complete. During the council’s discussion on the matter, Councilmember Vivian Olson suggested that the city wait to make that request until the improvements are completed.

“Once the design is done I hope we can sit with it before we make that change and just see how much of an improvement is made and whether or not it’s (the speed reduction is) actually needed to solve a problem,” Olson said. “Because if it isn’t, I think we’d all rather drive more quickly there.”

The project design phase is set to be completed this fall, along with right-of-way acquisition. Construction bids will be sought later this year, with the goal of starting construction in 2022, Haus said.

The city has already held six meetings with area property owners about the project, Haus said, and a virtual open house is scheduled for Thursday, Feb. 25.  (More information on the time of that meeting and a link to it will be provided when available.)

In terms of the tree code discussion, some councilmembers expressed frustration at how long it was taking for the city to pass what they believe should be a more comprehensive plan than the one the council has been considering. In particular, some on the council want the city to be more aggressive in regulating trees on already developed single-family properties. The current proposal focuses on improving tree retention with new development.

However, Edmonds Development Director Shane Hope noted that her department doesn’t currently have the staff to enforce such regulations on private property, which led to a council discussion about adding money to the city budget so that more staff could be hired.  Some counclmembers also asked that the city conduct a tree canopy assessment, so there is a clear way to measure what the city currently has in the way of trees.

Councilmember Olson made a motion to approve the existing draft code, with the idea of making future amendments to incorporate council concerns, but that motion died on a 2-5 vote (Councilmember Laura Johnson voting with Olson).

Staff agreed to incorporate additional council requests for changes and return with a revised document in a few weeks.