From residents concerned about losing parking spaces to bicyclists looking forward to a safer ride, dozens of attendees interested in a plan to place bike lanes in several Edmonds neighborhoods gathered for a virtual open house Feb. 24.

The meeting was led by Ryan Hague, City of Edmonds capital projects manager, and included several city staff members and consultants working on the project, plus three city councilmembers.

Hague started the meeting by noting there has been “quite a high degree of interest in this project,” adding: “We want to answer everybody’s questions tonight but the sheer volume that we’ve received means that getting to them all tonight is a little unlikely.

Ken Lauzen, from consultant Blueline, gave a project overview and explained that the proposal will increase bike lanes in Edmonds from eight miles to over 14 miles. “The reason that the Sound Transit grant came about is because it provides access to both the Edmonds and Mountlake (Terrace) transit stations for cyclists and encourages people to explore other methods of transportation,” Lauzen said.

He then explained the efforts the city has taken to date to identify some of the corridors of the bike plan. Blueline was selected to help with both the outreach and design, which started at the end of 2020 with a field survey of the areas, parking study and traffic analysis. Based on preliminary discussions and listening sessions, staff then presented a preliminary alternative to the Edmonds City Council, which was approved in August 2020. 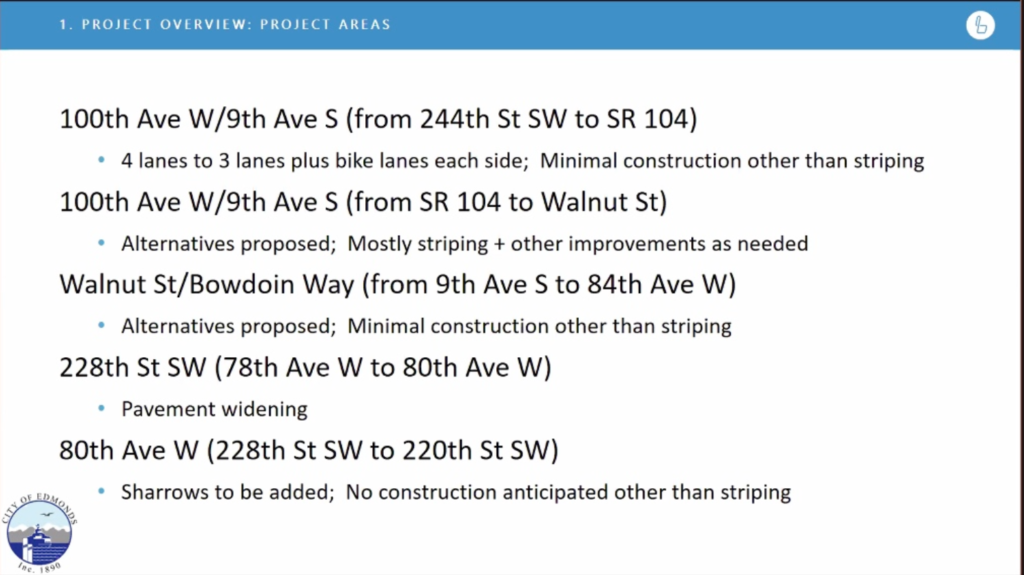 Pablo Para of PH Consulting then discussed the parking and traffic analysis. “We started by collecting very detailed traffic and parking data,” he said. “We used some older data that the city had previously collected and did research to find pre-COVID-19 data, and used those to put together an evaluation of the quality of the data to make sure that the analysis was thorough and supportable.

The results and some of the preliminary recommendations from that analysis are shown on the interactive project map for bicycle lanes, which is based on the city’s GIS platform. Anyone interested in the project can navigate to any spot and toggle the various design options to see how each one would impact accessibility and parking. Users can then submit feedback via the website to let city staff know which option they prefer and why.

To accommodate more specific questions about the impacted neighborhoods, residents were invited to join one of three, 30-minute Zoom breakout sessions focused on each project area.

In the breakout room for 100th Avenue West/9th Avenue South, the question was asked: “Middle two-way left-turn lanes had been promised at a minimum on 9th Avenue, especially as it was a main reason given to make it safer for cars, bikes, and pedestrians when this was presented to council and the public prior.  Where are they?”

Rsponding to the question, Edmonds Public Works Director Phil Williams said, “I might have been one of the ones at the council meeting. I don’t recall ever saying that. I ‘d be happy to go back and look at the council meeting and see if anyone said that, but that has never been an option on 9th and 100th.”

Another question about 9th Avenue addresse road sharrows — pavement markings that improve cycling safety on streets that are too narrow for traditional bike lanes. “Is the dedicated left-turn lane on 9th and 220th heading south staying or being removed to add the dedicated bike lanes at that intersection? Or will bike lanes be a sharrow there?”

Hague replied: “There’s never been any desire to remove that left-turn lane, that turn lane is absolutely necessary. We’ve looked at the northbound right-turn lane on to 220th and decided that one has to stay as well. We think as of right now we’ll be able to get bike lanes and turn lanes in that intersection.”

Added Para: “The alternative that is shown on the GIS site for that intersection is what we would recommend and it maintains all of the existing driving lanes that are there now and accommodates the bike lanes with some minor widening.”

A question was also asked related to conducting the study during COVID-19: “Why is the street parking data that was collected during the early weeks of COVID considered an accurate representation of parking habits?”

Maria Tribelhorn of PH Consulting explained that they collected data in November of 2020, which represents a relatively stable time during the pandemic. “The parking data was compared to data that had been collected in the same area at various times from 2011 to 2020. The data comparison showed that the number of parked cars was actually consistent with previous data that was collected, indicating that the number of parked cars does not need to be corrected for the pandemic,” she said. 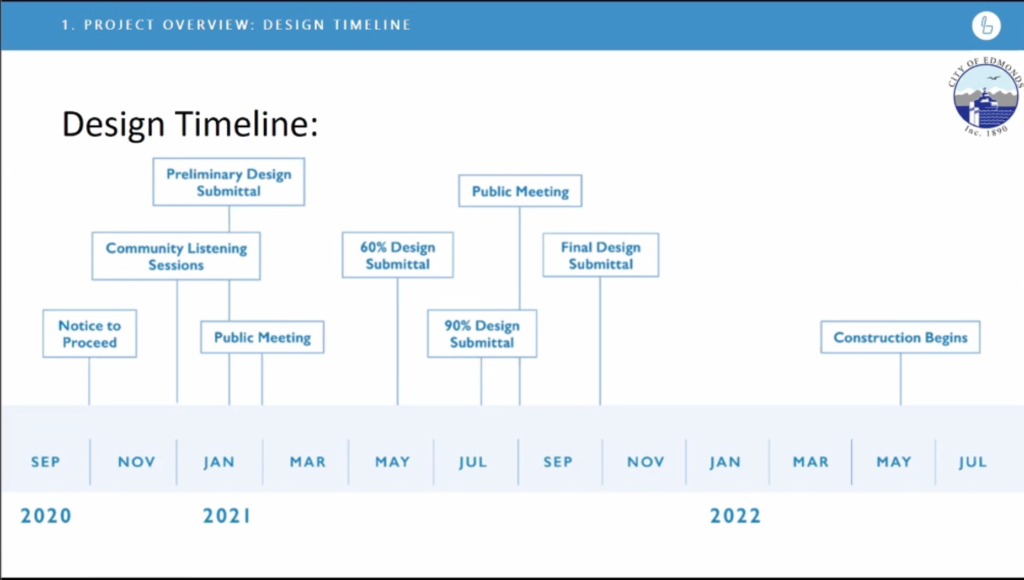 Previous questions sent in before the meeting included were addressed.

Q: The city assured the public there would be parking left at a minimum of 50%. If this is true, please address the reasoning for zero street parking even being included as an option.

A: “This is something that we asked the consultant to develop as a part of our due diligence,” Hague said. “The zero street parking is not a preferred alternative, it never has been, it’s never been recommended.  It’s just something that we developed as a theoretical option.”

Q: Most neighboring property (90%-plus) on these routes are houses with driveways, so the enormous residential impacts of this project are important to remember. Will this impact turning movement?

A: “The short answer is no,” said Para of PH Consulting. “There won’t be any restrictions to anyone’s existing access created by this project. In fact, the project will likely improve the ability for drivers to have better sight distance getting in and out of driveways.”

Q: For trash pick-ups, will residents be asked to place trash receptacles on the sidewalk and not the parking or bike lane?

A:  “This is something that we’re currently discussing with the trash companies,” Hague explained. “So far based on our current discussion it looks like we’re going to be able to place trash receptacles behind the sidewalk. This won’t impede the sidewalk or the bicycle lane. Once the project is complete, residents will be provided information on what the procedure is going to be.”

A: “Definitely,” responded City Transportation ngineer Betrand Hauss. “Anytime you have these kinds of grants you have to do a pre-installation bike traffic count and then a post-traffic installation count; just to see how efficient and what kind of increases your project has generated in terms of bike activity. It’s a common process.”

Another major concern expressed by several participants focused on the section surrounding the Westgate area of grocery stores and retail shops. The fear is that taking away a lane could severely impact the already highly congested intersection, especially during school and business hours.

Councilmember Vivian Olson also addressed worries about bike lanes on Bowdoin Way near Yost Park, because visitors in the summertime park on the street when they use Yost Pool. “I’m super concerned about having adequate parking by Yost and the safety at that intersection,” Olson said. “I really wish the city would take off on this website or any other discussions of this; take off the ones that say, ‘We’re going to have no parking.’ Putting that up there as an option doesn’t honor the input that we got this summer and frankly I don’t think that the vote from council would have been what it was if that was still on the table. It really muddies the water.”

Hank Landau, who owns property around 100th Avenue West, said he supports the bike project. “I recognize that there is some impedance of traffic in that intersection, but I’m much more concerned about the safety of bicycles and pedestrians,” Landau said. “So I’m all-in favor of extending the bike routes through the intersection — I really support what you ‘re doing.”

“We’re going to try to make this (the project) data driven,” Williams said. “I think there are tradeoffs on every single question that comes up here and we’re trying to balance how to make things safe for bikes, for pedestrians, and certainly to maintain safety on vehicles  as well. There’s going to have to be impacts to parking in order to accommodate the bicycle improvements that we’re wanting to make. There will be people that like the balance the city may select and there will certainly be those that do not”

In an effort to address the concerns and questions presented during the meeting, the entire panel stayed late and extended the date by which residents can vote on the presented options — from Feb. 26 to March 1. You can cast your vote and learn more about the project here.

Panel members welcome questions, comments or concerns and can be reached by email at bikelanes@edmondswa.gov or by phone at 425-771-0220.

The next public meeting is scheduled for Aug. 25.