Story updated to clarify the amount requested for reimbursement was $337 rather than $307.

The Edmonds City Council Tuesday night agreed with a city staff recommendation to contract with a human services agency to provide a social worker rather than hire an employee to do the work.

Councilmembers also began going through amendments to the city’s just-passed tree code, although ran out of time and agreed to continue the effort at a later date. And they engaged in a sometimes heated discussion — also continued to a later, yet-to-be-determined meeting — about whether Councilmember Vivian Olson should be reimbursed for the $337 she spent to obtain a 67-page court document as part of her research into the background of former police chief candidate Sherman Pruitt.

Regarding the social worker, the council had approved adding the position as part of the $500,000 allocated in the 2021 budget for a new human services department. At the top end of the salary range, the social worker would cost the city an estimated $130,000, which includes benefits. However, while discussing a job description for the position two weeks ago, councilmembers agreed they had not yet landed on whether the position should be a contractor associated with an existing agency or an in-house employee.

One of the most pressing priorities in establishing a human services program, Hoyson said, is for the city to gather data on the needs and gaps in Edmonds. Contracting with a human services agency to supply a social worker will give the city a year to establish a long-term plan and structure for the program, and at that point the city can determine whether to continue to contract for services or hire an employee, she said. She stressed that the city would be contracting with an individual — an “Edmonds-dedicated person that happens to be under the oversight of a separate human services agency.”

Other advantages of contracting, at least for the short term, include:

– Services can begin very quickly once a contract is executed.

– It will ensuring greater coverage levels — ensuring that someone is available on evenings and weekends.

– The city can tap into the established structure and resources of the agency, with ready access to other social workers and support staff.

– Supervision would be provided by the agency, including review of casework to meet standards.

– Contracting would be less costly than a direct hire, allowing more money to be allocated to the city’s human services program.

– A staff hire would require the city to purchase liability coverage, and that employee’s interactions would be subject to public disclosure. Contracting would transfer the liability to the contracted agency.

– The one potential downside in contracting is that it may take longer for the contractor to become familiar with the city’s “institutional culture and expectations.” However, Hoyson said that can be addressed by ensuring the contractor is on-site at the city for a majority of the work day.

After the presentation and a brief discussion, councilmembers voted 6-0 to move forward with the contracting model. (Councilmember Adrienne Fraley-Monillas, who was present earlier in the meeting, was absent when this vote was taken.)

The topic of reimbursement requested by Councilmember Olson stems from her decision in early December to request testimony that then-police chief candidate Sheman Pruitt gave during a lawsuit against the City of Arlington, in which Pruitt admitted to past instances of domestic violence. As My Edmonds News previously reported, in those documents Pruitt testified that an arrest warrant was issued against him, then later dropped; he testified that as a member of the Marine Corps, he was served with a military “no contact order” and that his commander had ordered him to 16 weeks of counseling. Eventually, a federal judge dismissed that 2009 lawsuit in a summary judgement, ruling in favor of Arlington.

Concerned that such a lawsuit might be a “red flag” for his hiring by a city, Olson contacted HR Director Hoyson, and said that Hoyson assured her that the city was doing an enhanced background check and that Pruitt was “thoroughly vetted.” However, when Olson was told the city didn’t have the actual court documents for her or other councilmembers to review, she spent $337 of her own money to obtain them.

The council ended up confirming Mayor Mike Nelson’s nomination of Pruitt as police chief on a 4-3 vote Dec. 8. Nelson withdrew his employment offer to Pruitt a week later, based on the fact Pruitt eliminated “relevant details from his application materials” — he forgot to list his application for a Lake Stevens police officer job 10 years earlier.

In late December, Olson submitted a request to then-Council President Fraley-Monillas that she be reimbursed for the court document purchase. Under city policy, the city reimburses its employees and elected or appointed officials “for reasonable expenses incurred conducting city business providing the expenses are prudent and directly related to the individual’s service on behalf of the city.”

Then in January, Olson made the same request of new Council President Susan Paine, who also denied the reimbursement. On Tuesday night, Councilmember Diane Buckshnis asked that the issue be discussed under new business. City code states that the council president audits expense claims and signs off on them,  and any denial has the opportunity to come to the full council for review.

During the council discussion that followed, Fraley-Monillas called Olson’s efforts to examine Pruitt’s background “a witch hunt” based solely on the fact that he is African-American. “So frankly I think it (the request) was inappropriate,” she said. Fraley-Monillas and other councilmembers who had originally voted to confirm Pruitt Dec. 8 also said Tuesday night they believed that Olson’s efforts went beyond her role as a councilmember, stating that such work should be left to the city’s human resources professional, who had assured councilmembers he had been properly vetted.

“Ms. Olson wanted to see what this person had done in the past and made the person guilty whether they were or weren’t,” Fraley-Monillas said. “And that’s why I denied it (the reimbursement) because it is not a councilmember’s business. This was the HR Department’s business to take a look.”

Councilmember Laura Johnson said that “it’s hard to overlook the appearance of bias” in Olson’s request, since she didn’t “take the same measures…when were vetting other director positions.”

“I’m not an HR professional, I’m not a legal professional, I don’t have the training required to handle the multitude of considerations when conducting this type of intensive background check, and to the best of my knowledge, neither do any of my fellow councilmembers,” Johnson said.

Laura Johnson also said she was “very concerned that if we were to approve this unauthorized expense, it would not only interfere with the work of trained professionals and we’re dipping into an administrative function but more importantly, I think it would set a dangerous precedence with regard to liabilty concerns.” Councilmember Luke Distelhorst said he also shared the concern about the possible liabilities the city would incur if the expense were approved.

Council President Paine said she denied Olson’s claim because it “was not a part of council’s typical responsibilities, that this function is normally done through the administrative offices. And as it’s been mentioned before…does put the city at a level of liability and risk.”

Councilmembers Kristiana Johnson and Diane Buckshnis, who voted along with Olson against confirming Pruitt Dec. 8  — in part over concerns about the court documents she had uncovered — spoke Tuesday night in support of Olson’s reimbursement request.

Kristiana Johnson then asked City Attorney Jeff Taraday for his thoughts on the matter. While Taraday said he wouldn’t offer a personal opinion on whether the expense should be reimbursed, he called the council confirmation power “very significant,” comparing it to the confirmation power in the U.S. Senate.

In determining whether to vote to confirm, each councilmember is given no guidance on how to vote, the city attorney said. “It’s entirely up to each of your legislative discretion.”

Taraday suggested the question councilmembers should be asking “is not whether you as an individual councilmember would have spent this money or gone to the trouble of acquiring this transcript. That’s not really I don’t think relevant. And similarly I don’t think it’s relevant as to whether you agree that this money was needed to be spent.” Councilmembers can state that the transcript was unnecessary, that they wouldn’t read it, or find it helpful, and that they preferred to rely on the human resources director. “You can believe all those things and still believe that the councilmember requesting the reimbursement was performing her role as a councilmember,” Taraday said.

Regarding the issue of whether approving the reimbursement would leave the city open to liability, “I’m not sure that’s germane to the request unless there’s a criteria that we only reimburse expenses when there’s no risk associated with the expense — and that doesn’t appear to be in the council’s adopted policy,” Taraday said. “The criteria is whether the expenses are prudent and directly related to the individual’s service on behalf of the city.”

After more discussion, the council voted to table the issue until a future meeting. 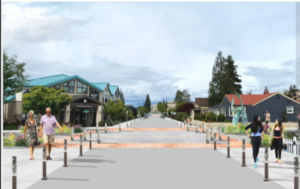 In other business, the council also heard more about possible concepts for development of the 4th Avenue Cultural Corridor, a stretch of roadway from Main Street to the Edmonds Center for the Arts. The public was surveyed on preferred concepts last year, and councilmembers talked more about those ideas. However, councilmembers agreed that they wanted more time to review the ideas, and staff agreed to return at a future time for more discussion and council direction. You can review the staff presentation — including survey results — here.

You can view a video recording of the council meeting at this link.