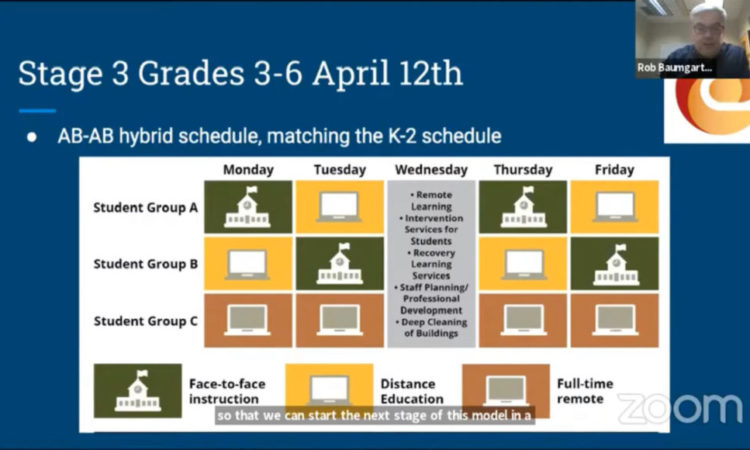 Responding to orders from the governor to usher students back into school buildings by mid-April, Edmonds School District leaders Tuesday night detailed new plans to return to in-person learning.

Prior to Gov. Jay Inslee’s announcement that all school districts must offer an in-person learning option to students by April 19, the district struck a deal with the Edmonds Education Association (EEA) to bring K-2 students back to in-person learning starting March 22. However, the governor’s order caused the district to alter how students will be phased back into school buildings. At its March 23 business meeting, the Edmonds School Board of Directors heard staff’s new plans to return students to classrooms.

Per the governor’s order, school districts must offer 30% of instructional time on-site in classrooms at least two days per week. Last week, the district announced students in grades 3-6 would be able to access in-person learning April 12, following the district’s spring break that begins April 5. Students in grades 7-12 will return starting April 19.

“I’ll be frank — we know it won’t be perfect but we’ll have kids in school and I know that everybody is working hard to meet the timeline,” Balderas said.

While many are excited to be back in school buildings, several parents were concerned that their students would not be able to keep the same teacher when switching from remote to in-person learning. Of the K-2 students who went back, 41% of students changed teachers, Balderas said. However, he added that 100% of teachers stayed in their school buildings and 89% with their grade level.

He also said the decisions for classroom assignments were based on other factors like the number of students allowed in buildings at a given time, the number of available teachers and the allotted space.

Also during the briefing, staff explained what a typical school week would look like moving forward for students under the district’s hybrid learning model. On Monday, second graders returned to in-person learning. K-1 students will return March 29.

For grades 3-6, students will be separated into three groups (or “cohorts”) with Group A attending in-person learning Mondays and Thursdays and remote learning on Tuesdays and Fridays, Group B will be attending in-person learning Tuesdays and Fridays and remote learning on Mondays and Thursdays, and Group C will stay remote full time. Under the model, Wednesdays would be reserved for intervention services, student recovery, staff planning, professional training and deep cleaning buildings.

The same ABC model will be used for secondary grades and each school will have either a six- period day or a three-period block. At the secondary level, middle school days would last from 8:10 a.m. to 2:10 p.m. while high school student hours would be from 7:20 a.m. to 1:20 p.m. During the meeting’s public comments, some parents were concerned about switching to an early start time.

“We understand that this model of instruction may not work,” said Assistant Superintendent Greg Schwab. “So, we do have some options to create flexibility for families who may be concerned about the length of the secondary day or how early in the morning they’re having to start their day.”

Under the ABC model, all secondary students will receive instruction at the same time depending on which cohort or model of learning they choose. For example, Group A will attend in-person learning on Monday with a teacher providing face-to-face classroom instruction. In Group B, students in remote learning on Monday will learn while watching a live-stream from the classroom via Zoom. Group C — which is fully remote — will also live-stream via Zoom.

Using this model, Schwab said staff aimed to keep students in their current classes and not have to switch teachers.

“It would be too complicated with 10 weeks left in the school year to completely unschedule and reschedule those students,” he said. “So we felt like this model allowed us to maintain class configurations, maintain students with their current teacher and also utilize the technology we’ve been using all year to deliver a concurrent model of instruction.”

With plans to offer in-person learning, the district will cancel the learning hubs that were created to offer support to students in grades 3-12. Additionally, hubs serving English learners will end Friday, April 2.

According to the district, Edmonds Hub (also known as eHub), which serves McKinney-Vento students and students in foster care, will continue to operate.

Recently, the Center for Disease Control and Prevention announced that social distancing in schools could be reduced from 6 feet to 3 feet. However, Balderas said the district must wait until given the go-ahead from state health officials before implementing the new standards. Until then, he said staff are looking at all available spaces for students.

“We are going to be looking at every available space at our secondary schools to ensure that we have the opportunity to provide students the hybrid model if that’s what they wish to do,” he said.

With students returning to schools, the district has also hired back more than 100 of its bus drivers.

Dana Geaslen provided an update on the daily health surveys (attestations) provided by the district to test for COVID-19. The test will only be required for students who will be visiting school campuses for in-person learning, testing, assessments, activities or athletics.

“It’s also important because if we do have to do some contact tracing — if there is a positive case (and) if there’s all those pieces — we know where people are and what spaces of the building they are in,” she said.

Surveys will be sent to the list “Guardian 1” in the district’s Skyward system used to communicate with parents and students.

During the public comments, one parent said he was disappointed the district would allow athletics to continue but not other after-school clubs such as robotics, which his child is involved in. According to Schwab, after-school activities will be allowed to resume as soon as language is finalized with the Edmonds Education Association, since supervising clubs is part of the teachers’ contract.

“We’re working on this plan now but our plan is to do outdoor graduation ceremonies more normal than ceremonies we did last year,” he said. “We will probably have some element of (remote) in the ceremony but we will also do a live ceremony where students will receive their diplomas at the stadium, walking across the sage with family present to see that happen.”

As of now, the district intends to hold individual graduation ceremonies for each school on a Saturday and Sunday at a still-to-be-determined date.

Regarding school meals, students attending in-person learning will be able to receive free breakfast and lunch, regardless of whether they qualify for free or reduced-cost lunch. The district will also continue to provide grab-and-go meal kits seven days per week at its community and school locations. Since it began offering free meals to students and their families last year, the district has provided 2.2 million meals, said Executive and Business Director Lydia Sellie.

Both before- and after-school child care will also be available for families as students return to in-person learning. For more information, view the below chart:

Looking ahead to the 2021-22 school year, Balderas said that school officials “fully expect to return to in-person in one format or another.” However, he added that the district will still have to come to a bargaining agreement with faculty for working conditions. Balderas added that there will be a need for some remote learning, which the district will offer students.

Information regarding summer learning opportunities and more information about plans for the 2021-22 school year will be available prior to summer break, Balderas said.