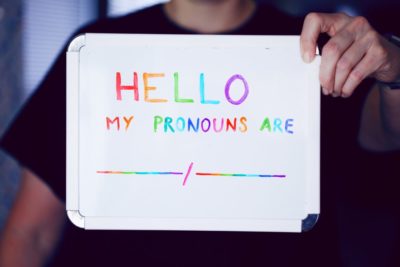 During the Edmonds City Council’s meeting on March 9, the Edmonds Youth Commission presented a request for all city board and commission members to include their pronouns in their email signatures and Zoom titles, approved in a 5-2 vote by Council during their March 16 meeting. This presentation was supported by the Edmonds Diversity Commission and Mayor Mike Nelson, who also sent out the pronoun inclusion request to city staff members.

The idea of pronoun inclusion has become more popular as understanding trans and non-binary gender identities has become mainstream in the United States. That is not to say that these are new concepts: Historical references to non-binary people can be found in Ancient Egypt, Mesopotamia, Indonesia, and further. In many indigenous communities of North America, the term “two-spirit” has been used since 1990 to describe LGBTQ+ individuals who have been influential throughout their history.

Edmonds has worked hard to be an inclusive place for LGBTQ+ people, with the notable accomplishment of hosting Pride events around Edmonds. However, the youth commission stated in their presentation that pronoun inclusion is another vast and necessary step in the right direction.

The Youth Commission’s newly formed diversity committee, made up of Grace Kamila (she/her), Finn Paynich (they/them), Aaron Nateephaisan (he/him), Sydney Pearson (she/her), and Owen Lee (he/him), presented on the significance of gender and the details of pronoun inclusion. They emphasized that pronoun inclusion has many concrete benefits; in addition to demonstrating our city’s commitment to inclusion, it helps prevent misgendering or using incorrect pronouns (or titles like sir and ma’am) for someone. Misgendering can suppress people’s true selves and lead to various issues, including gender dysphoria, isolation, stigma, depression and low self-esteem.

This is on top of the fact that transgender, non-binary, and gender-fluid people suffer from disproportionate homelessness rates and are at a higher risk of experiencing violence. According to the National Alliance on Mental Illness, those who are misgendered more often also suffer worse rates of anxiety, depression, and suicidal thoughts and are four times as likely as cisgender individuals to experience a mental health condition.

The commission’s request was for all city board and commission members to include their pronouns in standard format – Name (they/them) – in their email signatures and Zoom titles. It’s important that this policy applies to all city officials because it prevents those whose pronouns may not match their biological sex from feeling “other”ed. The Youth Commission also put together further resources and tutorials for pronoun inclusion published on their website as well as their Instagram, where you can follow them @edmondsyouthcommission.

“We wanted to make sure that you all know the potential negatives of this plan. The truth is, there aren’t any,” said Paynich. “All this does is make Edmonds more inclusive.”

— Submitted by the Edmonds Youth Commission