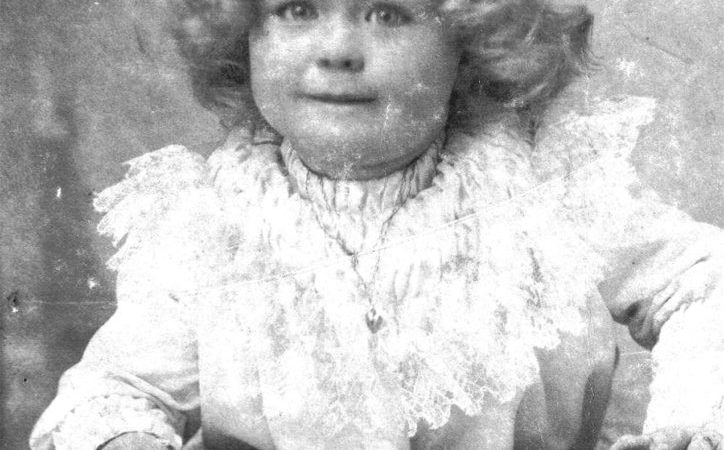 Sometimes writing articles about history can be frustrating, controversial, and even boring. Right in the middle of putting together an article about a large lumber company, its long-time log agent, and the beginnings of Lynnwood and Edmonds, I experienced all three moods, so I decided to put this particular project aside for the time being, take a break and lighten up a bit.

With this decision, my thoughts then focused on the never-ending COVID-19 worries and the tiresome controversies in politics, and just about every other subject. Maybe we can all take a break for a moment, and look back at an innocuous bit of history from my own family.

My beautiful mother Marie was born in 1903—in March, it will be 118 years ago  She left behind a small treasure—her baby spoon.  For me, what really makes my mother’s little spoon such a special keepsake is that imbedded in the soft silver metal are indentations from her small baby teeth.

After my mother’s death in 1985, her spoon was kept at my house, and here in Alaska, we still have it. Every once in a while, I use this little spoon to stir my tea—which manages to bring back some very good memories. Looking at the spoon one day, and with nothing better to do, I decided to see if I could find the actual history of this tiny utensil.  Switching from the past to the present world, with the help of the internet, I went in search of the roots of a spoon. While using some elementary detective work, I was pleasantly surprised to also discover some American history I never knew before.

First of all, since my mother left her teeth marks in the soft metal, I assumed the four-inch spoon was made of a soft high-grade sterling silver. Barely visible on the back of the handle was what I assumed to be the name of the silver company—a magnifying glass was needed for that. Another clue turned out to be the raised figure on the handle. It seemed to be that of a Roman soldier wearing a helmet. From this ancient military design, I came to the conclusion that this particular spoon was probably not originally manufactured as a baby spoon, but since it was a handy size for a small child to use, it served that purpose.

With my handy magnifying glass, I could see that the name of the spoon’s manufacturer was Albert Coles. With that information, I found this silver flatware design listed under the silverware patterns for the company of Albert Coles. The pattern’s name was given as Ivanhoe and the manufacture date of this design was 1855.

When I was attending school at Edmonds High School over 75 years ago, the classic adventure novel Ivanhoe, written in 1819 by Sir Walter Scott, was required reading in our literature class.

I was reminded of this when I discovered that this design of a helmeted soldier was not that of a Roman soldier, but instead it represented an Anglo-Saxon nobleman by the name of Sir Wilfred of Ivanhoe. The story was about his adventurous life in England in the 12th century.

Another find of historical interest was the fact that the metal used for this utensil was not sterling silver, as I had assumed.  The spoon is actually made of a metal alloy once known as coin silver. That find brought to light some unusual American history.

Coin silver was made in the United States from the earliest colonial times until just after the Civil War, and is said to be a uniquely American type of silverware created by the colonists in order to avoid all things British. Coins were melted down and cast into flatware and serving pieces. The most well-known firms for coin silver production were located in Boston, New York and Philadelphia. The silver company of Albert Coles, the spoon maker, was said to be an important and prolific coin silver manufacturer, mainly flatware, operating in New York City from 1835 through 1877.

Because coins were an alloy of metals, the silver content of the flatware was lower than that of sterling — only 90% — whereas, sterling is a standard 92.5%.  America did not adopt the sterling standard until 1870. There were some coin silver manufacturers who continued production after the war; however most changed to the use of the much more popular sterling silver following the Comstock Lode discovery in 1859 at Virginia City, Nevada (then located in western Utah Territory). As soon as sterling silver became available in America, the major manufacturers were able to produce silverware of the same quality as British companies.

While researching the background of my mother’s spoon, a few interesting tidbits regarding the general history of spoons were also found.

The history of the spoon goes back to at least 1000 B.C. when they were often used for religious purposes, and were made of wood, flint, slate and ivory. By the time of the Roman Empire, some spoons were made from bronze and silver, and mainly owned by wealthy people.

In ancient Rome, because a lot of their foods were soups and porridge, and forks were difficult to make, most people used spoons when they ate.

Before tableware place setting became popular, about the 1700s, people took their own spoons to the table, carrying them in much the same way as we carry a wallet or keys.

In the Middle Ages, when farmers and craftsmen worked long hours and got dirt under their fingernails, it seemed important they not be mistaken for a person considered of a lower class, thus a sliver spoon served a similar function as do our passports or driver’s licenses.

Ownership of a silver spoon was once an indication of social class, showing membership as a land owner. I imagine that is the origin of the old saying “born with a silver spoon in his mouth.”

All in all, writing this simple story did seem to be a great way to spend a day staving off the boredom of the isolation resulting from COVID-19 regulations, as well keeping busy during an extremely cold and snowy day in Alaska.

Betty Gaeng is a former long-time resident of Lynnwood and Edmonds, coming to the area in 1933. Although now living in Anchorage, she occasionally writes about the history and the people of both early-day Lynnwood, Edmonds and Mountlake Terrace. She is also an honorary member of the Edmonds Cemetery Board.

2 Replies to “Looking Back: The history of a small baby spoon—a family treasure”