“We’re starting to see the horizon on this pandemic.” With those words, Snohomish County Executive Dave Somers Tuesday launched this week’s COVID update. Starting May 1, anyone in Snohomish County over 16 will be eligible for the vaccine. But Somers warned that we should not expect to enjoy “the regular rhythms of life for some time.”

What the county sees on that horizon is that the rate new cases dropped to its lowest level since early October.

COVID by the numbers: 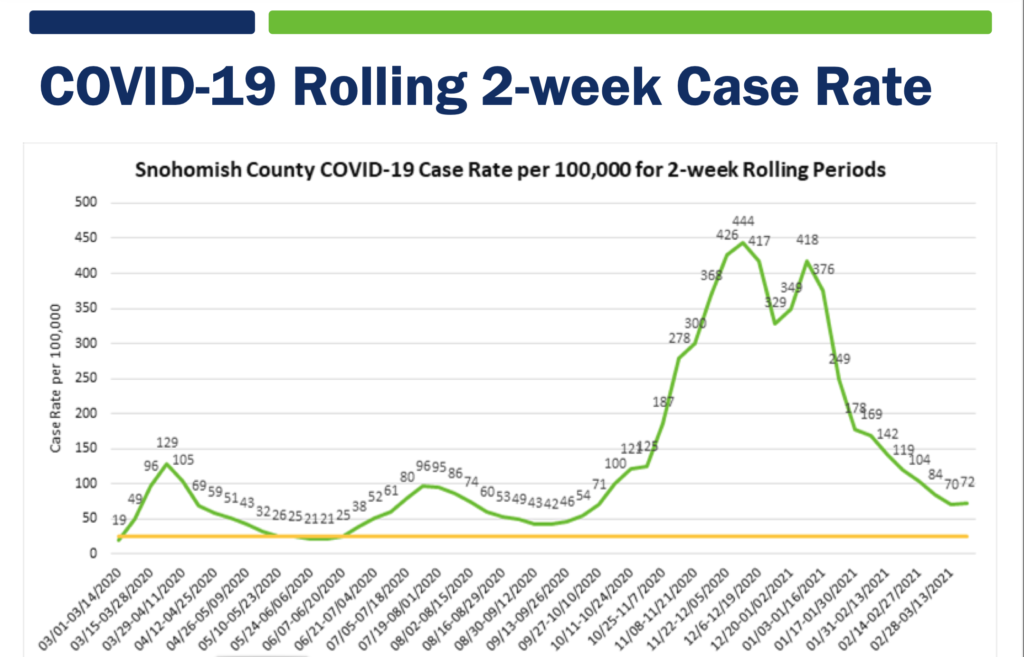 Somers warned the most critical issue is that the county’s capacity to vaccinate still exceeds the supply. This week, he added, “we still have 10-15 people eligible for each for each dose we have.” Predictions from the state and federal government indicate that the county could receive 50,000 doses a week in the months ahead.

The county has seen a “blip’ in the number of cases related to school athletics. Within the last week, County Chief Health Officer Dr. Chris Spitters reports the health district found six coronavirus cases in students who either played or practiced with teams. He said coaches, players and families are doing a good job with precautions when they play.

He said that coaches and players are doing a good job during competition, but acknowledged that often the breakdown comes off the field — in locker rooms, on buses and in carpools or when the students gather without masks. He also cautioned that as sports move from outdoors to indoors, it will become riskier.

Spitters agreed that teachers and students in classroom settings are doing a “great job” keeping safe distancing and mask wearing.

Asked when vaccines may be available for kids under 16, Spitters admitted he doesn’t know yet. He cited clinical trials underway throughout the world. but says he has not heard anything definite about administering the vaccine to children.

Quizzed about whether it is safe for younger kids to have “playdates,” Spitters recommended that no more than two families should have their kids play together. The issue, he said, is not whether the children may become ill, but how kids spread the virus to adults.

One more positive note: The county is not seeing increased cases in young adults right now. That age group had been the leading cause of new COVID infections during the winter. But so far this month, Spitters said his staff has not seen that trend continue. He added that he wouldn’t be surprised if there was an increase in young adults with better weather, more social and sports events, and among those who work outdoors.

Both officials said that 21 states and much of Europe report “upticks” in new cases. Somers stressed that the county’s goal is still to get below a new case rate of 25 per 100,000 residents.  “We’re making good progress,” Somers said. “We’ve come too far to let down our guards.”