“His expertise and creativity bring a wide selection of local, seasonal plates that satisfy a variety of palates, and his tenure brings consistency to our food quality,” said Lynnwood Convention Center General Manager Sara Blayne, CMP.

The year 2021 marks the 16-year anniversary for the Lynnwood Convention Center, a premier, full-service venue for conventions, trade shows, weddings, meetings and other events. The center has several menus to address the needs and flavor palettes of a wide variety of clientele – from banquets to weddings to small all-inclusive meeting packages.

“Here at the Lynnwood Convention Center, we do our best to delve into a number of different cuisines,” said Chef Felsenstein. “Everything is fresh and made from scratch and we are able to present restaurant quality food.”

Not only is Felsenstein a remarkable well-rounded chef, but also a culinary coach. “Michael is not only a great chef, but also a great leader. His creativity is infectious, and he loves mentoring his staff in order to help them maintain and improve their skills in the culinary arts,” said Lynnwood Convention Center Director of Food & Beverage Robert Sackett. “His overall knowledge and passion for the culinary arts is the kind of passion we could all only strive for.”

During Chef Felsenstein’s professional career spanning over 30 years, he has worked at five-star hotels, including The Windsor Court Hotel in New Orleans and The Four Seasons Hotel in Chicago, and four-star restaurants in Seattle and New York.

While Chef Felsenstein is a seasoned culinary veteran, he still feels rewarded by a good challenge. “Cooking vegetarian and vegan cuisine challenges me, in that it is thought provoking food that you try to elevate, which is ultimately appreciated and that is most gratifying.” 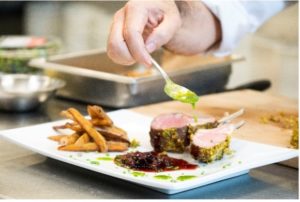 Keeping the cuisine elevated while having to do a complete menu and service standards overhaul in response to the COVID pandemic has been a new and unforeseen challenge. Chef Felsenstein has worked diligently to ensure the quality and high standards of service remain even if an item is now served as a grab and go or is served by an attendant from behind a plexiglass screen rather than buffet-style. Bento boxes were introduced to the menu to assisting in providing food safety within the new health guidelines, avoiding the more casual take-out box. “A change in packaging was not an excuse to reduce our standards for either the meals or the service we provide,” stated Blayne  The service of plated banquets meals has also been adjusted to reduce touchpoints.

Prior to his current role at the Lynnwood Convention Center, Felsenstein was the executive sous chef at the Museum of Pop Culture (formerly called Experience Music Project) in Seattle from 2000-2005.

Although Felsenstein has lived in Seattle for 23 years, he is originally from Brooklyn and was classically trained at the Culinary Institute of America in Hyde Park, NY graduating in 1988. He earned his bachelor of arts degree from Binghamton University.

Career highlights include being invited to be the guest chef at the prestigious James Beard House.

“From fundraising banquets to conferences, food plays a big part in bringing people together,” said Blayne. “The Lynnwood Convention Center events most often involve food, and with that, Chef Michael Felsenstein has been a pillar of our success.”

You can also view a video on Chef Felsenstein at: www.youtube.com/watch?v=6UgqQzJ-ikA