The Edmonds City Council at its Tuesday, April 20 meeting agreed to have City Attorney Jeff Taraday bring back for final approval next week an ordinance that reaffirms direction of the emergency six-month tree-removal ordinance it passed in March. The measure prohibits the removal of trees greater than 24 inches in diameter from any private property unless those trees are deemed hazardous.

The idea behind the ordinance, which the council approved March 2, is to give the council time to work on additional, more detailed tree regulations to be included in city code — stage 2 of a two-stage process for updating the city’s tree regulations. The Edmonds Planning Board is scheduled to begin work next week on that second stage.

The ordinance prohibits the removal of larger “heritage trees” — defined as 24 inches in diameter at breast height. As an emergency measure, it became effective immediately after its March 2 passage.

The purpose of the Tuesday public hearing was determine whether the ordinance should be continued for the full six months, and councilmembers did hear from several residents who opposed it.

“I don’t think the city council has a right to be telling us what we can do with our own property,” said Kimberly Bailey.

Another commenter, who identified himself as Fred G, said he has several large trees on his property “and I feel that it is our right to cut them down if we need to, if they become too large. I think homeowners should decide what’s best for their property,” he added.

Other residents offered a different point of view, including Kristina Stapleton, who stated that she has landmark trees on her property and she supports the emergency ordinance. “My neighbor has been cutting trees that block my view, and I’m sad to see them go. They’re part of Edmonds and what makes Edmonds a beautiful place,” she said.

The emergency ordinance as written does not cover the removal of trees on properties that are going through a permitted development, such as a project that has a building permit, subvision or land use approval. Councilmember Diane Buckshnis argued Tuesday night that private property owners and developers should be treated the same, and proposed removing language that exempts developers from the tree-removal ban. That measure failed on a 3-4 vote, with Councilmembers Buckshnis, Kristiana Johnson and Vivian Olson voting yes.

Councilmembers then voted 4-3 (Councilmembers Buckshnis, Johnson and Olson voting no) to direct the city attorney to bring to next week’s meeting a draft ordinance that follows the direction of the existing emergency ordinance. 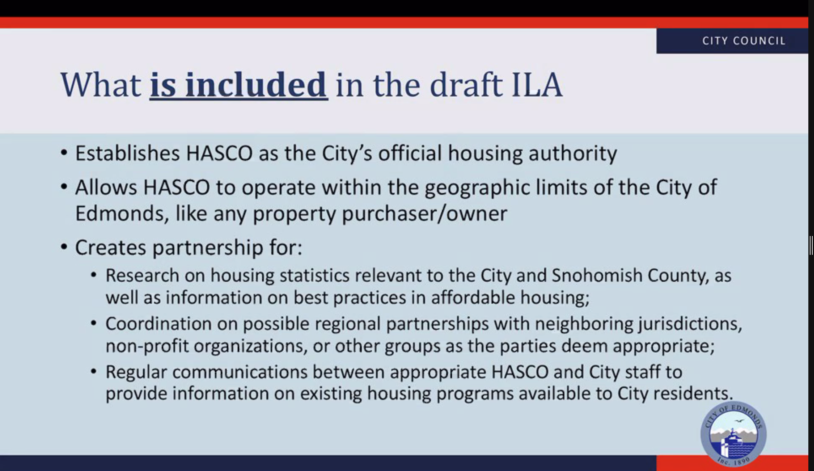 The next agenda item was discussion of an interlocal agreement with the Housing Authority of Snohomish County (HASCO) that would allow the housing authority to provide additional housing in Edmonds for low-income households.

A local government agency, HASCO receives federal funding to acquire, develop and operate low-income housing, but it must have an agreement with each city in which it operates. Councilmember Luke Distelhorst explained that while HASCO owns three properties in Edmonds — Edmonds Highlands, Olympic View and Sound View — many areas of the city (see dark green on map below) are not currently covered by the current agreement. This could lead to delays for HASCO in acquiring properties if an opportunity became available. 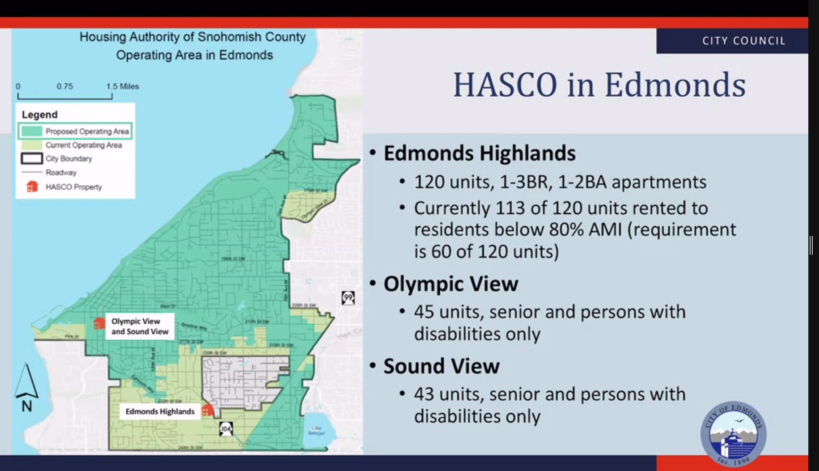 Under the proposed interlocal agreement, HASCO would still be required to meet all permitting and development requirements, and there would be no associated code, zoning or density changes, Distelhorst said. In addition, the city would not provide financing for any HASCO properties.

Councilmembers didn’t take action on the HASCO agreement Tuesday night, but will address it again May 4.

As the meeting neared 10 p.m., it was clear that the council would get through just one item out of five on the new business section of its agenda before needing to extend the meeting time. That prompted Councilmember Adrienne Fraley-Monillas to suggest that the city adminstration needed to do a better job of estimating how long agenda items would take. Councilmember Kristiana Johnson moved to adjourn the meeting at 10 p.m., but that motion failed.

After an affirmative vote to extend the meeting to 10:30 p.m., councilmembers then heard from Parks, Recreation and Cultural Services Director Angie Feser on a proposal to authorize the mayor to sign a $143,000 consultant contract with Portland-based Conservation Technix to update the city’s Parks, Recreation and Open Space (PROS) Plan. Feser described the plan as “a six-year guide and strategic plan for managing and enhancing parks, open space, trails and recreation opportunities in Edmonds.”

She noted that the consultant’s proposal includes a public involvement component with specific plans for reaching community members who use languages other than English and people who have low incomes.

Following her presentation, Feser began fielding a range of specific questions from councilmembers but didn’t get far before it was nearly 10:30 p.m. The council attempted to extend the agenda again but further discussion on the purpose and merits of that extension ensued. As a result, councilmembers weren’t able to take a vote before the 10:30 p.m. extension expired and the meeting abruptly ended.