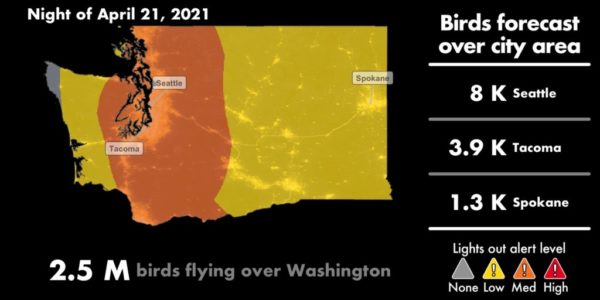 The Colorado State University Aeroecology Lab, which studies bird, bat and insect migration, has issued a medium and high ‘”Lights Out” alert level for the Puget Sound area as thousands of birds migrate over the Puget Sound region.

According to the Audubon Society, every year, billions of birds migrate north in the spring and south in the fall, the majority of them flying at night, navigating with the night sky. However, as they pass over big cities on their way, they can become disoriented by bright artificial lights and skyglow, often causing them to collide with buildings or windows.

While lights can throw birds off their migration paths, bird fatalities are more directly caused by the amount of energy the birds waste flying around and calling out in confusion. The exhaustion can then leave them vulnerable to other urban threats.

Here are ways to contribute to the Lights Out solution, the Audubon Society says: