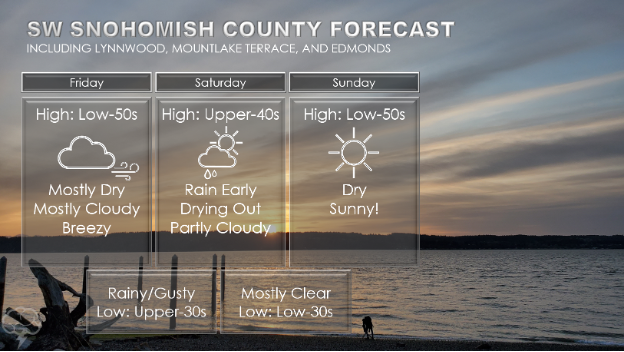 It kind of seems like our seasons just can’t make up their mind right now, doesn’t it? We have a couple days of sun, then the rain returns again. Temperatures get close to 60 one day before tumbling again into low 50s or upper 40s the next. Thankfully, it’s looking like we will see our first real bout with spring next week.

Before we get there, however, we have to deal with one more frontal system. This is expected to impact us Friday evening into Saturday morning. Ahead of this, most of Friday will be spent with cloudy skies. There is a slight chance of a few isolated showers before the main system arrives, but if that occurred, it would likely be very minimal. Breezy conditions are also expected to begin later in the day Friday.

The brunt of the system will go through the region in the overnight hours, with rainy and breezy conditions. Temperatures are expected to drop into the upper-30s, which is on the chillier side for this time of year. In fact, snow levels are expected to drop with this system, bringing more snow to mountain passes—keep this in mind if you have pass travel plans this weekend.

Some rain is possible in the morning hours on Saturday, but the trend will be leaning towards drying out as the day progresses. The sun is even expected to peak through at times. However, temperatures are only expected to get into the upper-40s. The normal high for this time of year is the mid-50s, so that’s definitely on the cooler side.

Temperatures will likely drop even lower Saturday night into Sunday. Little to no clouds are expected, so without our cloud “blanket” to help trap heat, temperatures will likely plummet to near or even below freezing. A jacket will definitely be needed Sunday morning. Temperatures aren’t expected to rebound too high on Sunday (at least it’ll be dry!), but don’t worry. The warmup is coming.

An upper ridge is expected to form over the region, which will lead to dry weather and warming temperatures for much of the week. You can see the ridge in the image below (valid for Monday morning). 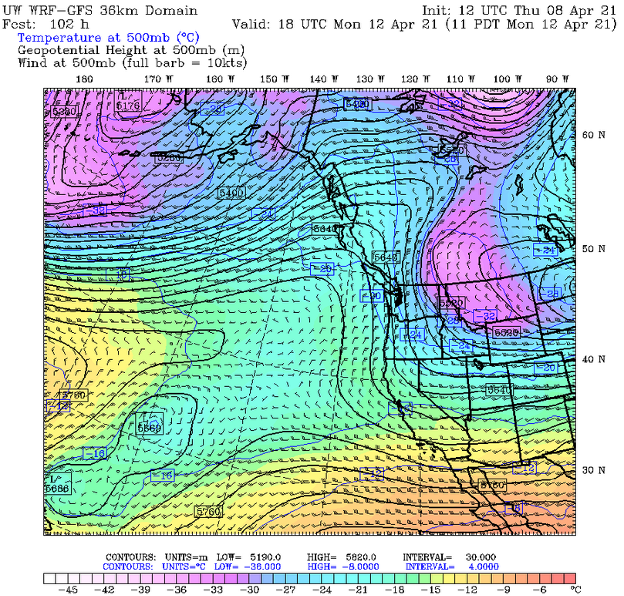 If you progress the above model to Wednesday evening, you can see that this ridge has not moved. In fact, it has even strengthened. 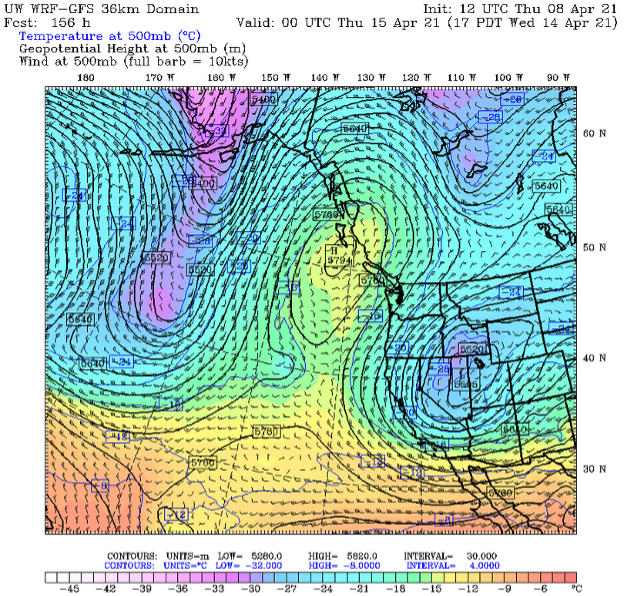 The above configuration of ridge and troughs is known to meteorologists as an “omega block,” after the Greek letter omega (Ω). If you look closely you can see a shape that resembles an omega. An omega block is a blocking pattern, where the same atmospheric setup can be “stuck” for several days, leading to similar weather for as long as the setup is in place. Areas under the omega block tend to see warmer and dry conditions, while areas on either side—where troughs are located—tend to experience rain and clouds.

Thankfully, it’s looking like we’ll get the better end of the deal, with several dry, sunny days next week. Temperatures are also expected to gradually increase as the week progresses. Highs in the low 60s are likely by Tuesday, with the potential for mid-to-upper 60s by mid-week. Some models are even showing the potential for our first 70-degree day of the year later in the week. There is still plenty of time for things to adjust, so don’t start betting for 70 degrees just yet—just know that temperatures are expected to warm up, with exact numbers becoming clearer as we get closer.

Finally, it seems like we will see a longer bout with spring than just a couple days. I hope you get the chance to enjoy it!