The Edmonds City Council got a closer look Tuesday night at the latest proposal to add over six miles of bicycle lanes in various Edmonds neighborhoods.

Representatives from consultant Blueline Inc. were on hand to talk about their work on the project, which began with collection and analysis of parking and traffic data in the affected areas followed by community outreach. A virtual open house to gather residents’ input was held Feb. 24.

Funded by a $1.85 million Sound Transit Access grant, the initiative would add bike lanes to various Edmonds streets, including:

Ken Lauzen from Blueline began by sharing the map above, noting that “the majority of the work is going to be these green and purple sections, from Five Corners, west along Bowdoin, to Yost Park and then along Walnut to 9th, and then along 9th to down as it turns to 100th, through Westgate as it turns into Firdale to 244th/205th.”

Preliminary design ideas for the affected corridors were presented to the city in January, then refined based on resident input and the results of the data collected. Another public meeting is scheduled for this summer with final design in the fall and construction set to begin in March 0f 2022.

Grace Garwin of Blueline talked about the parking data collected and also pointed to key issues identified during public outreach on the project. In particular, she noted residents stressed the need for street parking on Bowdoin, especially during the summer months when Yost Park attracts additional visitors. There were also requests to improve pedestrian crossings in project areas — which the team is reviewing to include the possibility of adding flashing beacons — and to address concerns about speeding vehicles.

Lauzen then ran through a list of recommended alternatives for each area, noting that the green color shown in the drawings is for visual representation only and has not been a color decided on for those lanes. 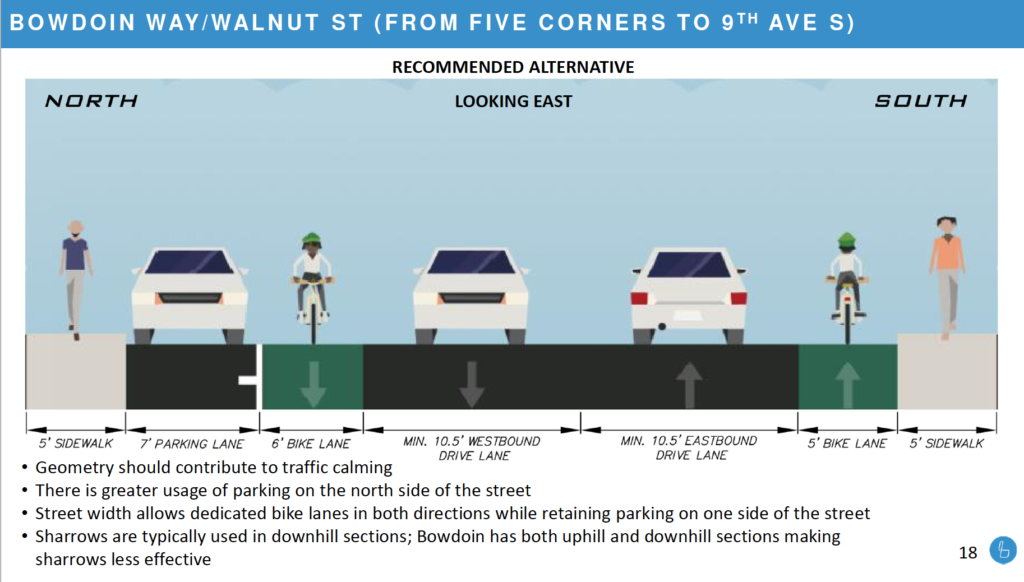 The recommendation is to keep parking on the north side, where there is greater use, and add bike lanes in both direction. 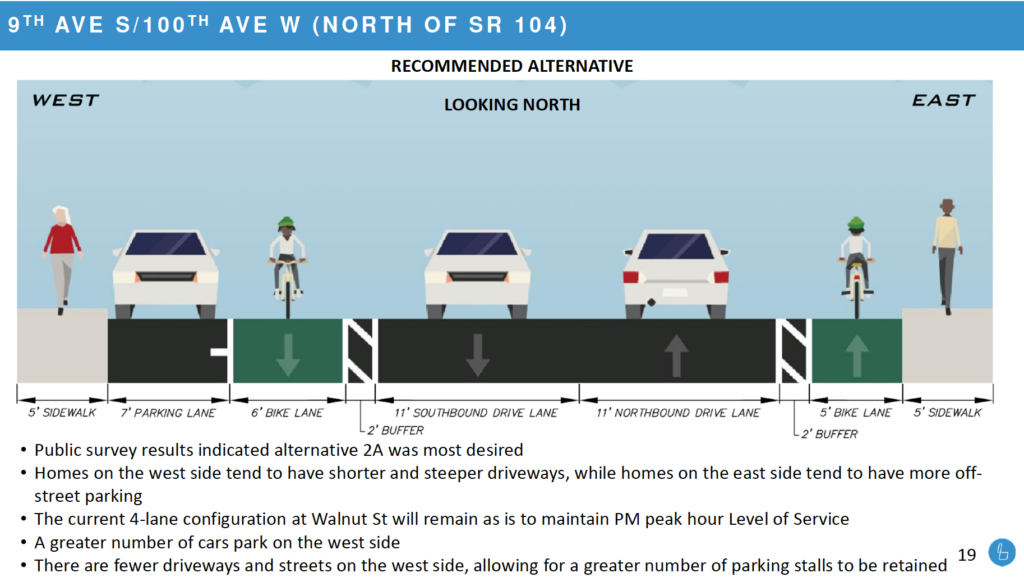 Consultants broke this area into four different sections, looking at a range of factors like driveways and parking. “All four segments of this corridor pointed to going with this alternative,” Lauzen said. It includes parking on the west side, with a 6-foot bike lane on the west side of the street and a 5-foot bike lane on the east side; and buffers between bike lanes and the travel lanes. 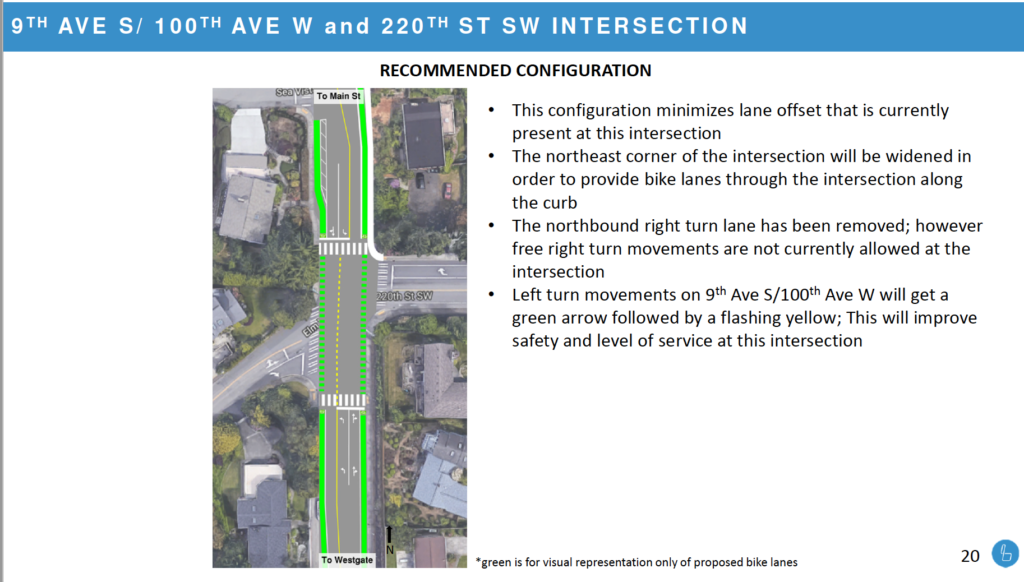 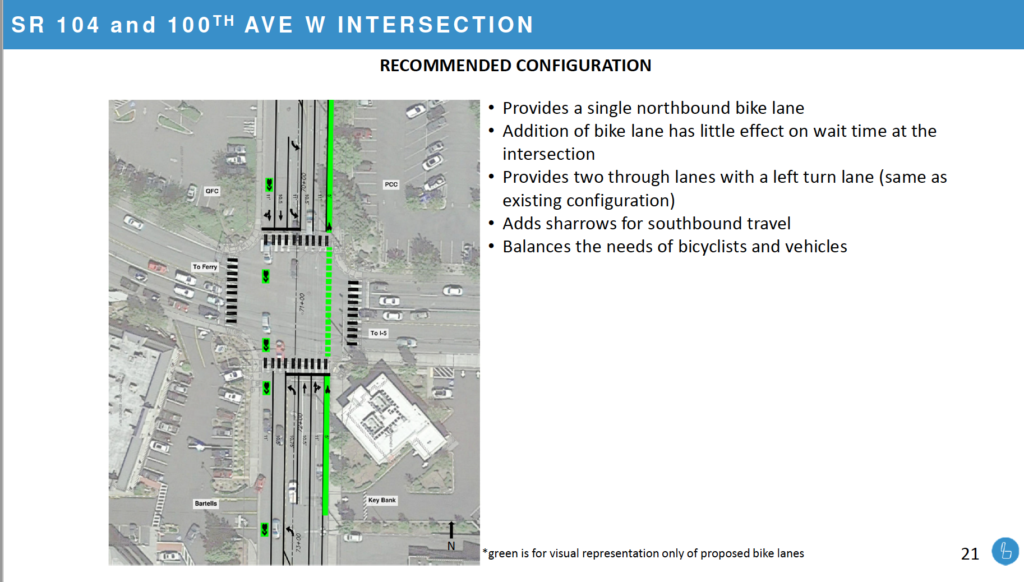 “We looked at many alternatives here,” Lauzen said, “but this one…best balances the needs of the bicyclist and the motorist,” he said. The proposal calls for keeping the same number of lanes through the intersection — two northbound, two southbound and a left-turn lane in each case. While there would also be a northbound bicycle lane crossing the intersection, the southbound lane would be a sharrow (a marking to indicate a shared lane with vehicles), he said. “There’s just not the width or the right of way of the curbs through this intersection to get a southbound bike lane as well,” he said.

The project team did look at the idea of creating a separate bicycle lane in each direction by reducing vehicle lanes but rejected it because that  would “significantly increase” wait time for motorists at the intersection, Lauzen said.

Councilmember Luke Distelhorst, himself a bicyclist, asked specifically what the extra wait time would be at the SR 104 and 100th Avenue intersection and Lauzen replied that depending on the time of day and direction it could be either 10 seconds or 28 seconds. Distelhorst said that delay didn’t seem particularly significant for the increased safety it would provide to both bicyclists and motorists sharing the road. “Going through that intersection is not ideal without bike lanes now,” he said. 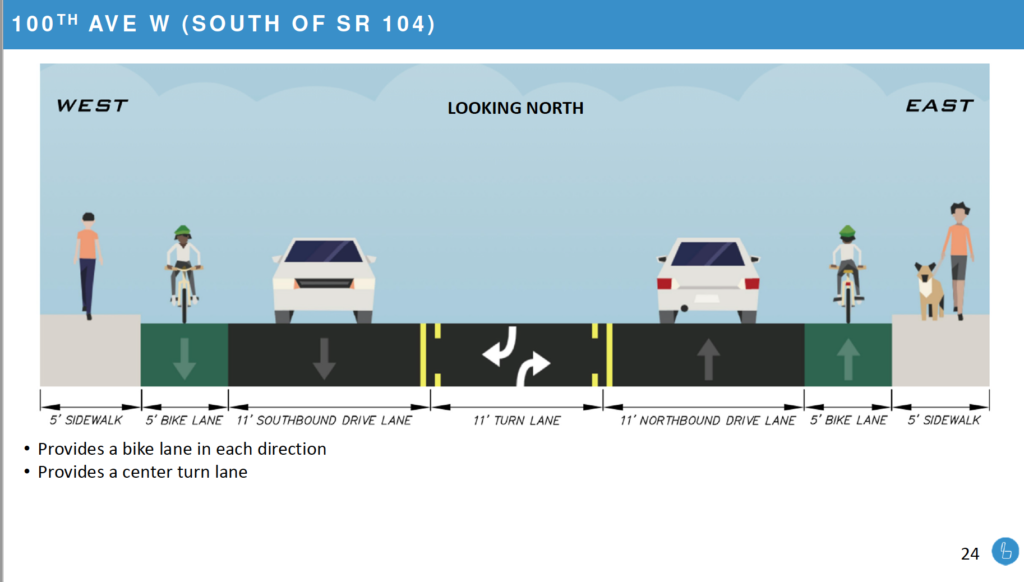 Under this option, a bicycle lane would be provided in each direction with a center-turn lane. 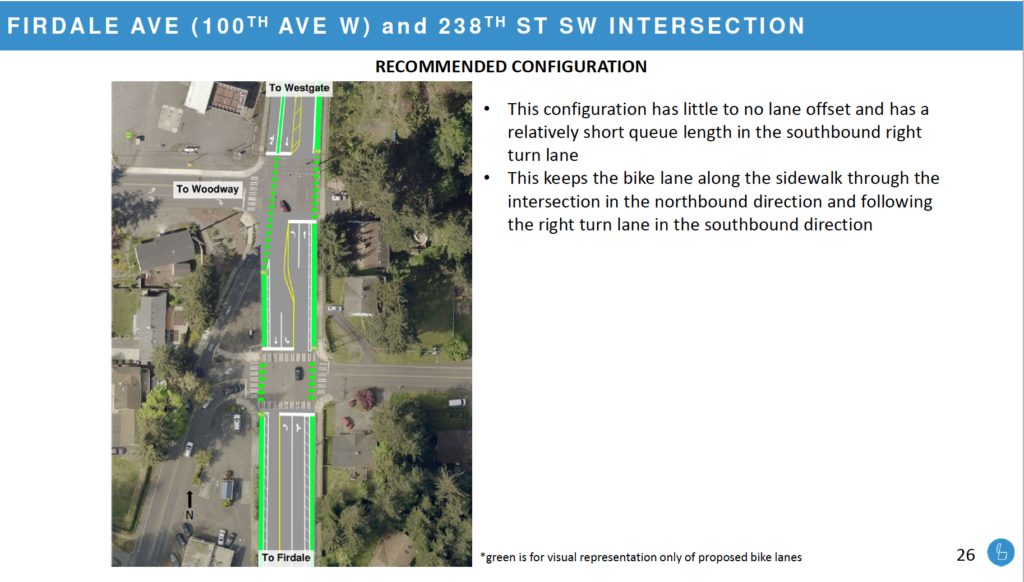 This intersection configuration keeps the bike lane along the sidewalk through the intersection headed northbound and following the right-turn lane going southbound. 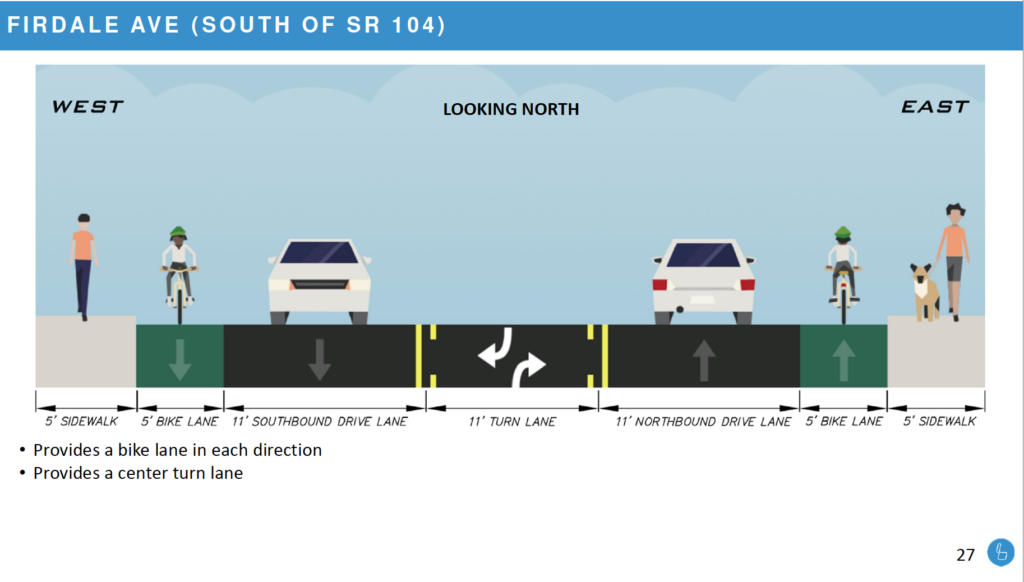 This is the same configuration as mentioned above for Firdale Avenue, with a bike lane in each direction and a center turn lane. 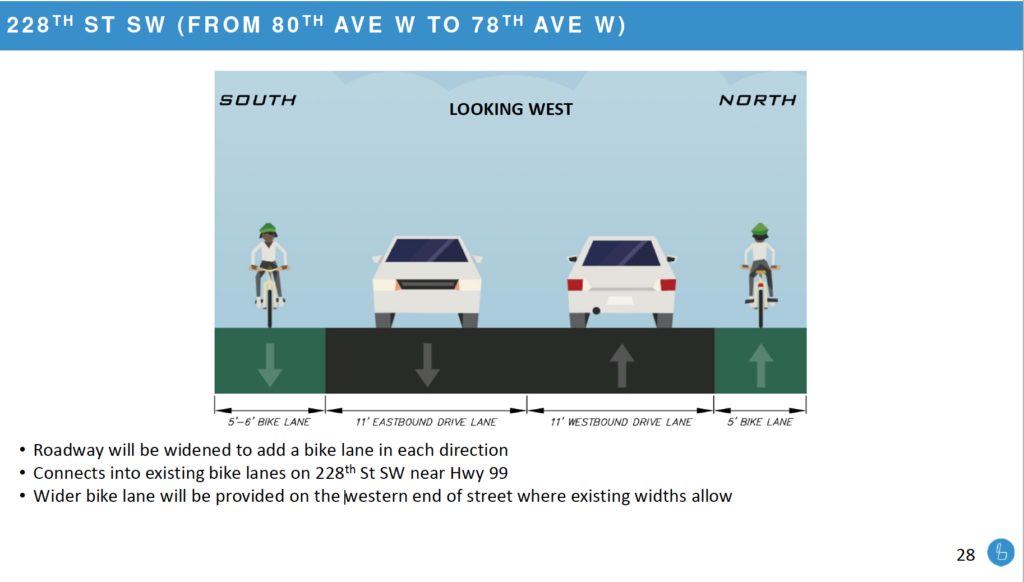 Unlike the other segments mentioned, this segment would require some roadway widening to add a bike lane in each direction, Lauzen said. 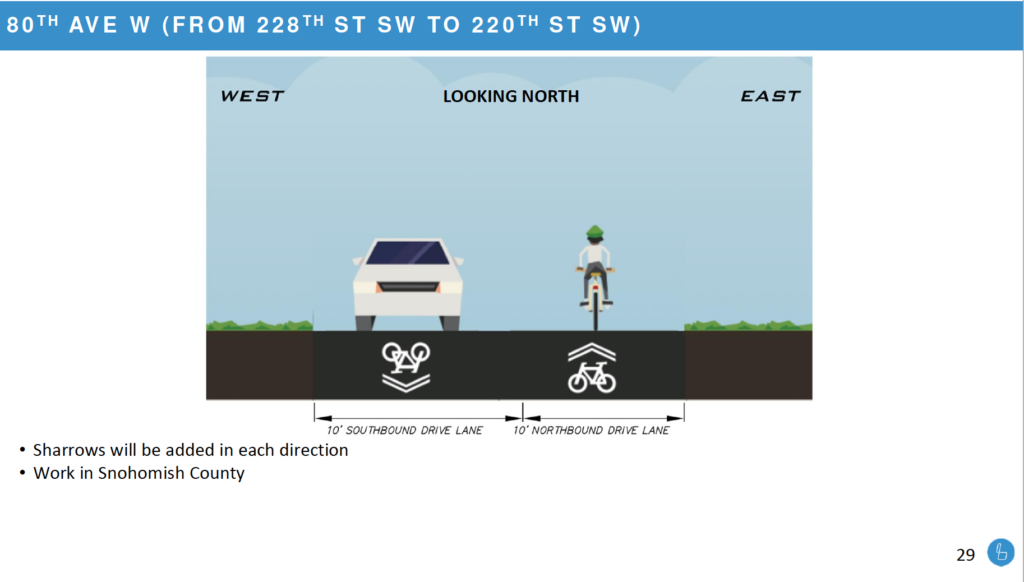 This section would only include sharrows and signage, with no added bike lanes.

The council agreed to wait two weeks before approving the latest design configurations, to give both citizens and councilmembers a chance to offer additional comments to staff that may be incorporated.

In other business Tuesday night, the council:

– Approved by a 6-1 vote an interlocal agreement with the Housing Authority of Snohomish County (HASCO) that would allow the housing authority to provide additional housing in Edmonds for low-income households. Many areas of the city are not currently covered by the current agreement that Edmonds has with HASCO, and this could lead to delays for HASCO in acquiring properties if an opportunity became available. Councilmember Kristiana Johnson voted against the measure, stating that while it was one of 15 recommendations by the Edmonds Housing Commission, the council hasn’t had a chance to discuss those yet.

– Reviewed proposed changes to the unit lot subdivision process so that it would apply to the city’s downtown BD Zone where multifamily residential is allowed on the ground floor. Citizens will have a chance to comment during a future public hearing on the proposal.