Snohomish County gets a reprieve. There is no rollback to Phase 2 COVID restrictions for the county; in fact, no rollbacks statewide.  That’s the news from Gov. Jay Inslee, who says all counties will stay where they are for the next two weeks. That means shopping, dining, outdoor recreation all stays where it is; we are holding in what is our new normal.”

“Absolutely, we’re breathing a sigh of relief,” County Executive Dave Somers told reporters at this week’s COVID briefing Tuesday. “The pause is very helpful.” The county learned of the reprieve just before the governor made his announcement. That pause comes after state health officials ran the numbers, which show the fourth wave of coronavirus infection “appears to be at a plateau.” Inslee said.

The state looked at two key statistics. One is the new case rate which, in Snohomish County, rose just six cases to an average of 229 per 100,000 residents over the past two weeks. That’s a slowdown all health officials had hoped to see.  The other metric is the rate of hospitalizations and that now sits at just over 7 per 100,000 residents — above the goals but not by much. County Chief Health Officer Dr. Chris Spitters says there has also been a dramatic decline in the weekly count of COVID deaths. County numbers show three in the most recently reported week in mid-April.

Spitters says the reprieve is also “a call to action” and that efforts to push vaccinations must redouble. Forty-three percent of county residents have had a first dose of vaccine, but only 30% are fully protected. When compared by age, the numbers show a stark difference: 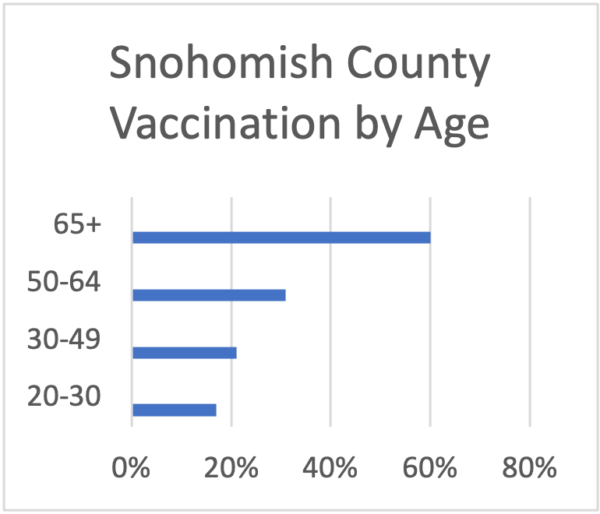 There is still also some disparity by ethnicity and race: 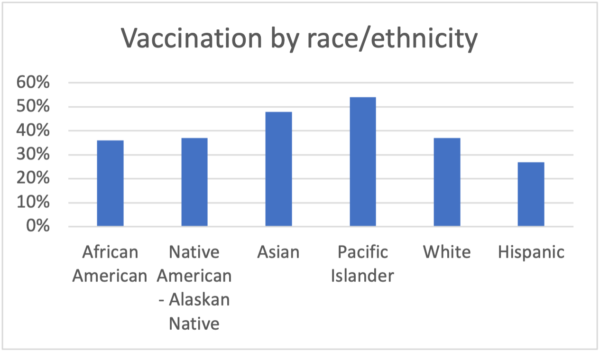 Spitters said the vaccination of Hispanic residents, which has lagged, is now showing a strong surge but the group still trails all others. The county and state goal is still to vaccinate at least 80% of residents as a step toward herd immunity, and Spitters believes the county will reach that level. In addition, he said, the Pfizer vaccine should be available to children as young as 12 within a week or two. The county continues to see more and more cases; what officials call a ‘’substantial risk” in people between 40 and 59 years old; with increasing cases among those in their 20s.

At the same time, the number of people seeking vaccines has dropped significantly.

Jason Biermann, county emergency services director, told reporters that one mass vaccination site scrambled over the weekend because the 600 people they expected did not show. Biermann says with help from the media and community groups, they administered all doses; not one was wasted. It’s especially problematic because once the Pfizer vaccine is thawed, it must be used quickly.

The mass vaccine sites are adapting to the lower turnout by offering what they call “flex choice.”As long as there is enough vaccine, county sites will offer shots to anyone who shows up, with or without a reservation. They will also extend vaccine hours into the evening.  This weekend, the vaccine sites at Edmonds College and at Boom City on the Tulalip Reservation will be open Saturday; the Ash Way location will be open Saturday and Sunday for anyone. Biermann urges those who have had trouble finding a site to call the vaccine hotline at 425-339-5278 for help. “We don’t want reservations to be a barrier,” said Biermann.

Spitters admitted that studies show that 10-20% of people “may end up being a hard ‘no’ to vaccine” but urged people to “take that shot and let’s move Snohomish County forward.”

7 Replies to “COVID briefing: ‘Sigh of relief’ as Snohomish County gets rollback reprieve”