Britain Smith earned first place in the automotive maintenance contest and Jonah Peterson finished in third place for the division.

Students learned about the results after the competition while attending class and by phone. Smith said he received “a giddy phone call” informing him about his top score which led to “chills and a grin.” “In competition I could view one of the test’s scores, so I checked and thought I did bad,” he said. “It was a real shock to have been the winner.”

Program instructor Bryan Robbins was ecstatic about the results. “I have been trying for a gold medal going back to my own days competing in SkillsUSA as a student back in 2002,” he said. “Nineteen years later, and we take not just our first ever state championship, but we sweep the automotive section and take both gold medals!”

During the competition, students conducted various types of tests and diagnosed problems with both individual auto parts and vehicle systems. Participants perform these independently to demonstrate their understanding and application of automotive knowledge. For this year’s event, students used an online training platform to complete the various tests and tasks from their own computers.

Smith, who is a senior at Meadowdale High School, said he appreciated some of the college connections built through the contest and he is also excited about what the first-place finish can mean to his future. “Being top tech in the state looks extremely good on a resume,” and “my successes in this competition will allow me to be a top contender for several scholarships and grants,” he added. “This competition got me prepped for UTI’s Top Tech competition, where they award grant money directly to the students. I scored really high on that one too to the best of my knowledge, so that money is going to help pay for college.” 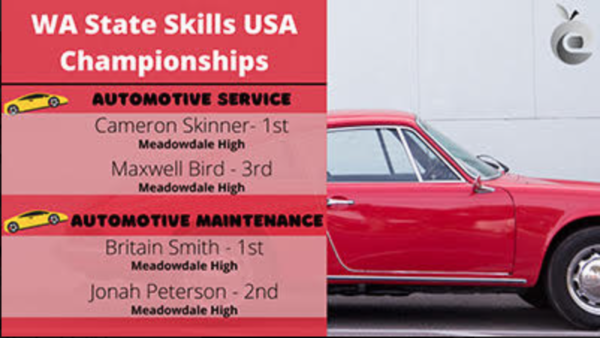 April’s state competition finals pitted those who had advanced from the different regional contests held earlier this year against each other. January’s Puget Sound regional contest was the first one in the nation to be held online after many of last year’s events were cancelled due to the COVID-19 pandemic. The testing platform for the state competition remained the same from regionals but featured new content. Robbins said the national championships will also be conducted online he’s not sure yet what exactly those will look like.

Even with a first-place finish under his belt, Smith is still busy preparing for the national competition. “I am most focused on alignments, steering, AC systems, braking systems, electrical components, and suspension systems,” he said. “I’m feeling very optimistic.”

Robbins said the team’s performance this spring already “validates all the work I pumped into this year.” He had a discussion with his wife last summer about the challenges he was facing for the upcoming school year, such as creating take-home projects and building an online classroom in lieu of instruction in the automotive shop while also helping raise the family’s two young children. “I told her I was going all in and burning the candle at both ends,” Robbins said. “It’s been more work than I ever dreamed of, but two gold medals tells me I did right by these kids.”

(Learn more about the program in our previous article here.)

The automotive technology classes are open to all high school students in the Edmonds School District through the district’s Career and Technical Education program. There is an inter-district bus available to bring students who take an auto shop class back and forth to the facilities at Meadowdale High School. Classes in the program last two periods a day for the full school year.