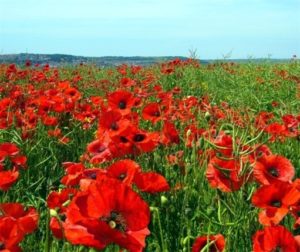 Nothing appears to symbolize the true meaning of Memorial Day in our country more than the beautiful and poignant poem In Flanders Fields. This poem was written 106 years ago by Canadian poet and WWI battlefield surgeon Lt. Col. John McCrae, after he had seen a field of colorful red poppies blooming on what shortly before had been a war-torn battlefield in West Flanders, Belgium.  The poem In Flanders Fields and the red poppy later became symbols of remembrance of the wartime deaths of our country’s service men and women. Now, on Memorial Day, we honor all veterans.

At Edmonds Grade School, only 22 years after Lt. Col. McCrae had written his poem, our fifth-grade class assignment was to memorize the words to In Flanders Fields. Since that time I have wondered if the poet himself had a premonition of his own death in a battlefield hospital before the ending of the war.  As children of the 1930s, we believed as we were told, that WWI would be the war to end all wars—war was for others, not America. Little did we realize what awaited our own generation a few short years later — and the future in store for the generations that would follow us.

In Flanders fields the poppies blow
Between the crosses, row on row,
That mark our place; and in the sky
The larks, still bravely singing, fly
Scarce heard amid the guns below.

We are the dead.  Short days ago
We lived, felt dawn, saw sunset glow,
Loved and were loved, and now we lie
In Flanders fields.

Take up our quarrel with the foe:
To you from failing hands we throw
The torch, be yours to hold on high
If ye break faith with us who die
We shall not sleep, though poppies grow
In Flanders fields.

On the WWI battlefields in Belgium and France, the little poppy, which was actually a weed, appeared to be one of the few plants to grow on the scarred turf of what had been fields of battle. 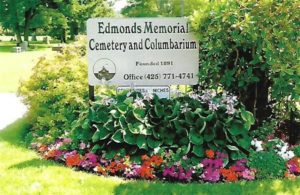 Since 1982, when the City of Edmonds became the owners of the historic IOOF Cemetery and renamed it Edmonds Memorial Cemetery, Memorial Day services have been held at the cemetery each year.  With the very restrictive early safety guidelines we were required to follow because of COVID-19, the cemetery board decided not to hold any program for Memorial Day last year.  Safety for the public still a priority, this year, after much thought and planning, the city and the board have decided to hold a “Drive-thru Only” Memorial Day time of remembrance at the cemetery from 11:00 a.m. to 1:00 p.m., Monday, May 31.

For those unfamiliar with Edmonds, the cemetery is located at 100th Avenue West and 15th Street Southwest — just north of the Westgate intersection.  The only entrance for this drive-thru Memorial Day event will be the 15th Street Southwest entrance at the north end of the cemetery. Edmonds police will direct traffic and volunteers will be stationed at the 15th Street entrance to answer any questions you may have. They will also be handing out informational pamphlets and poppies.

For those who wish to personally visit the graves of family or friends that day, the city and the board request that, if possible, to avoid congestion, you visit well before 11 a.m. or after 1 p.m., or on other days. This pandemic has been a time like no other, and we have all had to become innovative, adaptable and most of all, considerate.

The city and the cemetery board, as well as all the volunteers, hope that this special time of remembrance will be marked on your calendars. Remember: Drive-thru only Memorial Day at Edmonds Memorial Cemetery and Columbarium on Monday, May 31 — 11 a.m.-1 p.m.

More specific information will be provided later, and there will also be posters around town as reminders.

Betty Gaeng is a former long-time resident of Lynnwood and Edmonds, coming to the area in 1933. Although now living in Anchorage, she occasionally writes about the history and the people of both early-day Lynnwood, Edmonds and Mountlake Terrace. She is also an honorary member of the Edmonds Cemetery Board.