I have always loved the ocean, and aspired to study the creatures that inhabit it. I am a scuba diver in the Pacific Northwest part of Annie Crawley’s Dive Team. Learning to dive has been extremely influential in my understanding of the ocean’s importance to the world. I love exploring with my team and seeing the different animals. Recently, I decided to dive deeper into my understanding of marine life and ecosystems threatened by the changing climate through taking a special scientific diving course created for my team.

I learned scientific diving this fall and it changed the way I see and interact with the underwater world. Before becoming a scientific diver, I noticed animals but never thought much about their significance. Now, I know their scientific names, where they live, what they eat, and what role they play in the ecosystem. I learned that each living organism plays an important role in the world, no matter how big or small. From recycling nutrients back into the ecosystem, or microscopic plankton serving as the base of the ocean’s food web, I have a new appreciation for this life.

I learned how to study and quantify animals and algae during my scientific diving course in my underwater backyard at Edmonds Underwater Park. I love identifying animals and using real scientific methods to study the environment. 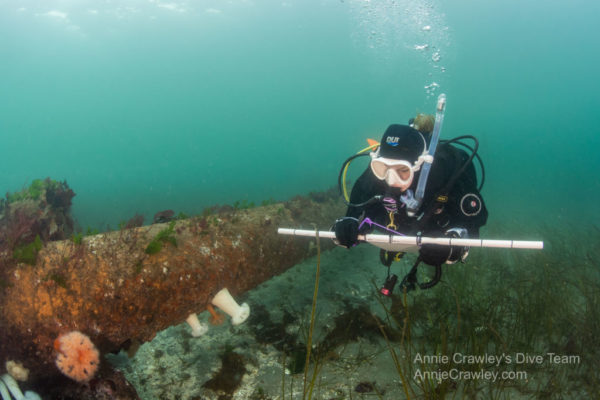 One tool I use while scientific diving is a transect. A transect is a large tape measure we unroll and lay on the seafloor. Along a transect we can count the occurrences of an object like plants or animals. Sometimes, our transects might run across a bed of eelgrass which are present throughout the underwater park. Eelgrass is a significant source of health to all of the park. The beds reduce the very damaging effects of ocean acidification by absorbing carbon. 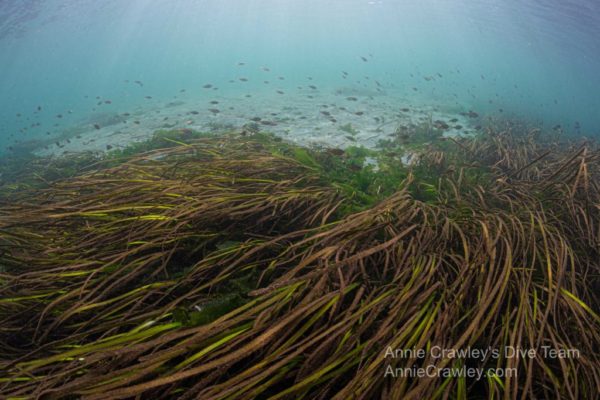 Eelgrass roots protect the park from erosion, and the blades provide shelter for many animals. While surveying transects, I am able to observe my surroundings more closely, like the eelgrass beds. I notice how many species use these beds as protection and as a place to forage for food. For example, crabs and flounders will seek shelter in the eelgrass, attracting other animals that will then forage for them. Conducting transect surveys has allowed me to realize that without eelgrass beds at Edmonds Underwater Park, the entire ecosystem would suffer. 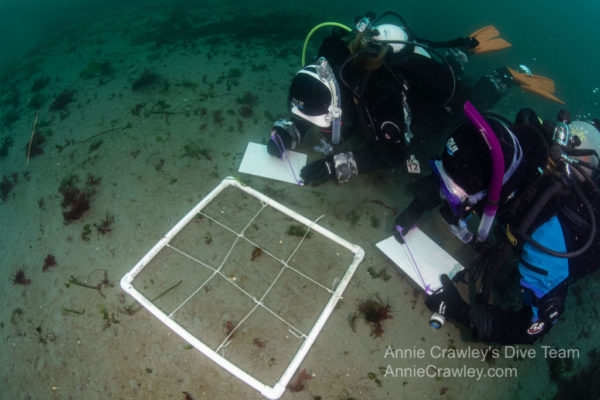 Another tool I use is a quadrat. This is a portable grid used to create a small sample size in a large area. My teammates and I made our own quadrats using PVC pipes and string. The quadrats, with an area of a quarter square meter, represent a small sample size of the 27-acre park. We randomly generate points around the park to take quadrat surveys to avoid location bias. Once we reach a destination, we carefully place the quadrat and count species within the square and record results on a slate. We can use abundance data from the small quadrat samples to predict total relative abundance of species within the park. Scientists use data such as this to assess ecosystem health. 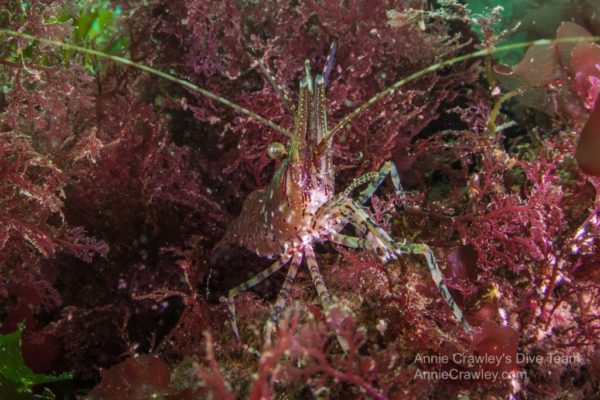 I spent a lot of time studying a small area, counting tiny animals and algae. This helped me notice things I would normally swim right by. One species I observed frequently was the coonstripe shrimp. As decomposers, these small crustaceans help to maintain the health of the sea floor by eating organic matter. Another species I observed in almost every quadrat was sea lettuce algae. This translucent green alga is particularly essential because it acts as a food source for many small species in the park (Slater Museum). Animals eat the algae and then are fed on by other animals in the park, which means the algae is important to support the entire ecosystem. While diving, I often overlook these organisms, but scientific diving has allowed me to slow down to see and appreciate them in a new light. 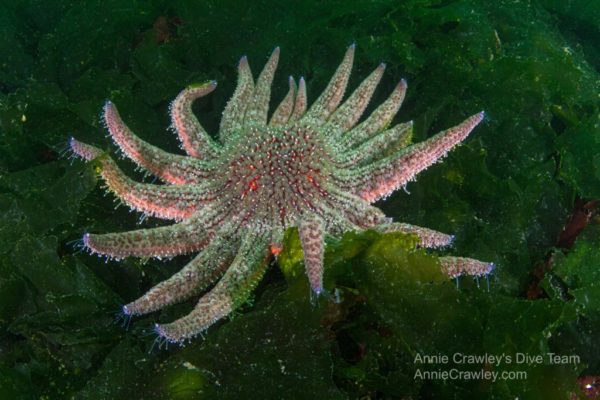 An additional method I use for scientific diving is fish counting. We can count individuals of a particular species of fish, or estimate sizes of different species. I have a special interest in lingcod, because they are a top predator in Edmonds Underwater Park. By eating small animals, lingcod keep populations in check and maintain biodiversity. It was fun to see how many lingcod I could count just along Jetty Way, especially measuring the gigantic females who were waiting to lay eggs.

Another abundant species I counted were perch. This small fish is a prime food source for many predators that inhabit the park, sustaining the ecosystem’s food chain. I learned there are four species of perch we see in the park: striped, pile, shiner, and kelp perch. Without fish like these in the park, biodiversity would be limited and we would not be able to view the variety of species we do.

While the tools I used during scientific diving allowed me to notice the plethora of marine species in Edmonds Underwater Park, I learned that the biodiversity is not the same as it was 10 years ago. Occasionally, I see a lone sunflower sea star at Edmonds Underwater Park. These sea stars used to be plentiful around Puget Sound, but beginning in 2013, Sea Star Wasting Syndrome destroyed populations throughout the Pacific Northwest (MARINe). The lethal syndrome causes lesions and necrosis in a number of sea star species, leading to death. Scientists know the syndrome is linked to ocean warming and acidification. Sunflower stars were hit the hardest by sea star wasting, and it is estimated that over 90% of their population has been lost as a result (IUCN).

Sea stars are a keystone species, meaning when they are removed from the ecosystems, drastic changes occur that limit biodiversity greatly. This is true in California, where the loss of sea star predators has caused populations of the herbivorous purple sea urchins to explode and consequentially destroy kelp forests. Lack of biodiversity prevents ecosystems from recovering from serious disturbances. Fortunately, my surveys proved there are many ochre stars and mottled stars present in Edmonds Underwater Park. I hope to see sunflower star populations rebound in the coming years. 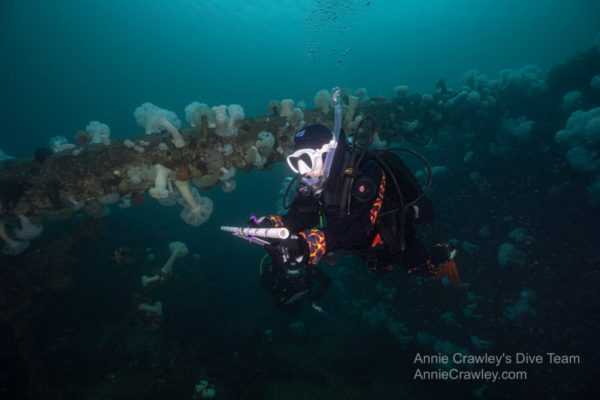 Scientific diving has helped me solidify my goals of studying the ocean and science in the future, because I want to protect the ocean and create change. Ultimately, it has taught me how vital every organism is to the ocean. Humans often overlook magnificent creatures that live with us and, as a result, destroy their world. It is up to each of us to do our part in protecting ocean resources because we need the ocean. I hope everyone can learn scientific diving, or at least take the time to slow down and appreciate the life exists around us.

Eliza Street, 14, is an Issquah High School student and a PADI Advanced Open Water Diver and Junior Scientific Diver. Her love for ocean life inspired her to take the PADI Scientific Diving specialty course, which is helping her pursue her career goals of learning marine science. She is specifically interested in studying ocean acidification, as it is one of the most important problems our ocean faces and it directly affects Edmonds Underwater Park.