As the Edmonds City Council starts to discuss the Edmonds Citizens Housing Commission (ECHC) recommended policies, some of us who served as commissioners and alternates would like to share our thoughts on a path forward.

In March, a minority of former housing commission members presented an appeal to Edmonds residents to support the full set of housing policy recommendations of the ECHC (Letter to the editor: Affordable housing for Edmonds – the real story – My Edmonds News). However, in their letter to the editor, part of their “real story” was left out. Of the policy recommendations submitted by the ECHC, some had unanimous support from the Housing Commission members, while many did not. The policy advocating for the elimination of single-family zoning, as we know it, throughout Edmonds had considerable debate and was forwarded based on a simple majority vote.  We did not, and do not, support this policy. So, it was disingenuous to imply that the entire set of proposals were equal in their support by the commissioners. 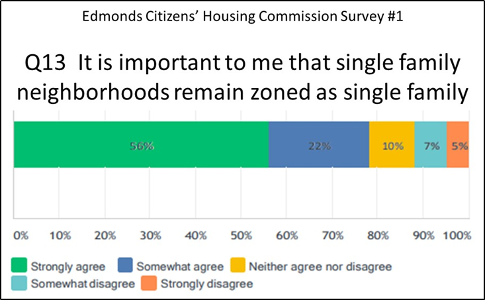 We, the ECHC, used four surveys and one face-to-face and three online open houses to assess public opinion on various recommendations. In the first survey, an overwhelming 78% of respondents said single-family zoned neighborhoods should remain zoned single-family (including 59% of those who rent in Edmonds). In the final survey, once again, by almost a 2:1 margin, the majority did not support up-zoning to allow duplexes, multiple townhomes, triplexes, and quadplexes throughout single-family neighborhoods. They did, however, support exploring cluster housing to provide smaller, more affordable housing within Edmonds as well as developing areas where business and housing types coalesce to create inviting urban villages. The public comments and input throughout the life of the ECHC was consistent on the desire to keep single-family neighborhoods an integral piece of Edmonds.

During the April 20 Edmonds City Council meeting, Councilmember Kristiana Johnson made a request to prioritize the order in which the various policies are discussed, however it received no traction. We support Councilmember Johnson’s request. Without prioritization, consideration of the ECHC recommendations will be done in an ad hoc, siloed fashion that will be disconnected from the actions taken on the tree code, by the Climate Action Plan or by the Edmonds Planning Board. All these topics interface with housing issues and should be discussed holistically – not in silos.

“Up-zoning” has broad ramifications for everyone in our community. If the city council, for whatever reason, does not acknowledge and believe the Citizens Housing Commission Survey results, then we challenge them to put a referendum on the ballot to determine what the citizens want. The question to be answered: Do the citizens of Edmonds want:

Answering this question first will help city councilmembers, as well as Mayor Nelson, prioritize and integrate actions across siloes as well as evaluate the ECHC recommendations against a clear outcome [vision] that is desired by the majority of Edmonds residents. We are asking for a more respectful and gentle density strategy for our community, based on 15 months of public feedback submitted to and received by the ECHC. We encourage all residents of Edmonds to let the mayor (carolyn.lafave@edmondswa.gov) and the council (council@edmondswa.gov) know which choice they want – A or B.