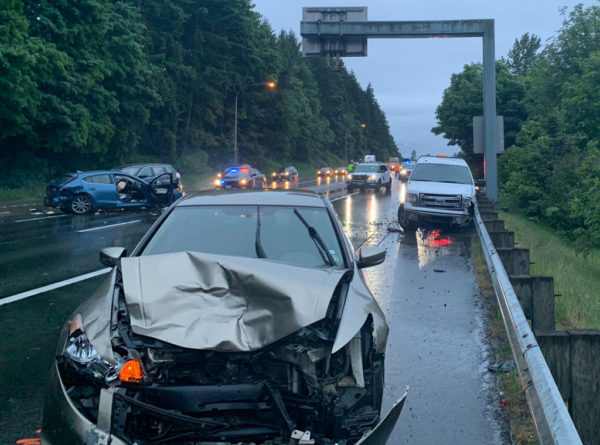 Three were reported injured in a four-vehicle, suspected DUI collision that blocked multiple lanes for several hours on Interstate 5 just south of 44th Avenue West in Lynnwood early Thursday morning, according to the Washington State Patrol.

Around 3:20 a.m., dispatch received calls about a Mazda sedan driving erratically. State Patrol spokesperson Trooper Rocky Oliphant said the vehicle later struck the rear end of a pickup truck, which he said then sent either one or both vehicles — including the Mazda — into contact with the left guardrail. The Mazda struck the guardrail an unknown number of times before spiraling back into oncoming traffic, where it came into contact with another vehicle, he said.

The Mazda driver, who is suspected of driving while intoxicated, was transported to Harborview Medical Center with serious, but non-life-threatening injuries, Oliphant said.

Two other drivers were transported to nearby hospitals — one to Providence Regional Medical Center and another to Swedish Edmonds. Oliphant said one of the those drivers had possible serious injuries.

The collision caused multiple lane closures that backed up traffic for hours. All lanes were reopened around 8:40 a.m. The State Patrol is still investigating, Oliphant said.