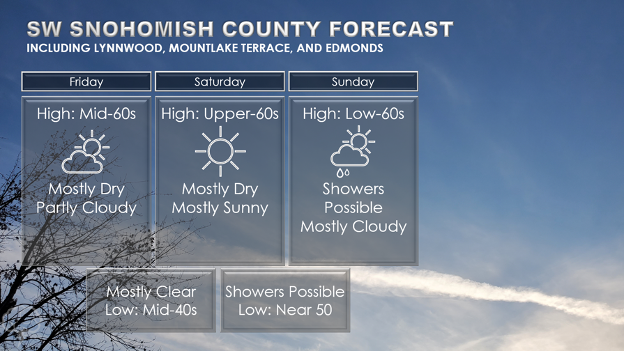 We are one month away from the start of summer (even less if you consider meteorological summer, which starts June 1)—time has just flown by! Some of you are probably already counting down the days. Usually, spring in this area is characterized by showers, but this year, those showers have been more sporadic and not amounting to much.

If you look at the image below, you can see that the accumulated precipitation at Paine Field is running about 45% behind average over the span of spring so far (March 20 through May 19). 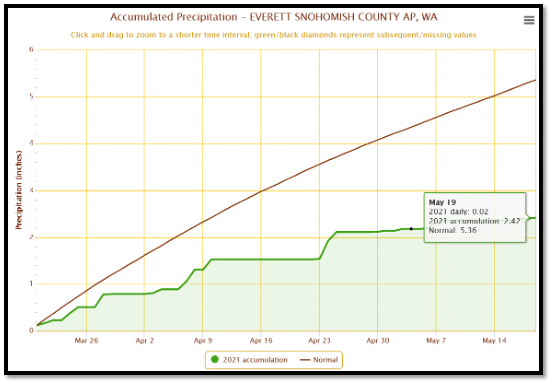 Not only has the amount of rainfall been lacking, but we’ve also seen less days with measurable rainfall. As seen in the graph below, we’ve had 24 days (in the same time frame) with 0.01 inches of rainfall—among the lowest since 1999.

Even though rain is expected at times over the span of the weekend, it’s not likely to be enough to make up for the deficit we’ve seen thus far. However, any little bit helps as we approach summer and fire season.

Friday is expected to be mostly dry in our area, but there is a slight chance for an isolated shower or two as a result of an upper-level low in the vicinity. You can see this feature in the image below. 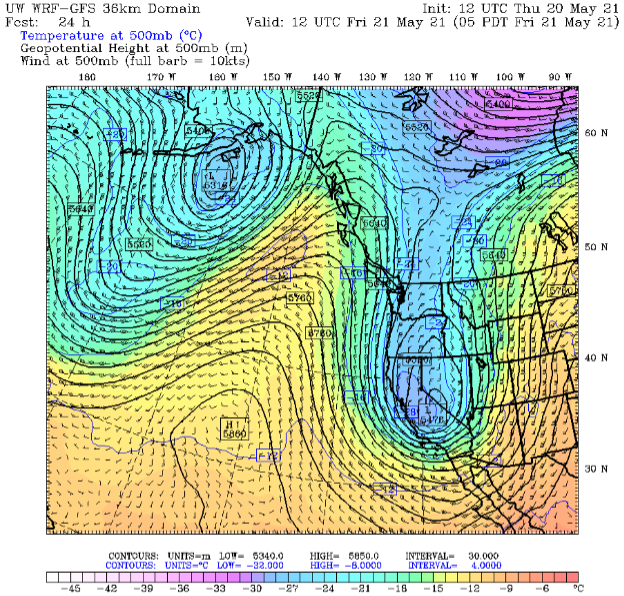 This low is expected to dip south over the course of the day, which should decrease the rain chances in our area. We should see a decrease in clouds, as well. Highs are expected to be in the mid-60s.

Saturday will likely be a little nicer than Friday, with less clouds early on to limit high temperatures. As a result, we should get a bit warmer—likely close to 70 degrees. The chance for a few showers returns in the overnight hours Saturday into Sunday. If we see this rain come to fruition, it’s not expected to be a washout. Despite this, if you have outdoor plans or chores, Saturday would probably be your best bet.

Some of you may be a bit bummed over the chance for a few showers over the weekend, but don’t fret. We are fast approaching our driest time of the year; and who knows? In a couple months, you may begin to count down the days until the rain comes back.

Have a great weekend