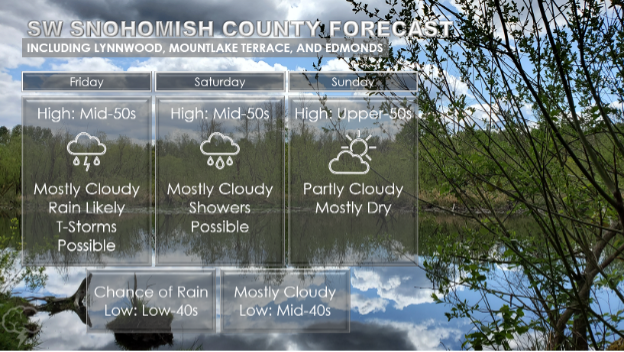 We have officially reached the month of May—the year is just flying by, isn’t it? Summer is just about a month and a half away!

Overall, the month of April ended up being quite nice. It was drier than average, in terms of both the total sum of precipitation and the number of days with measurable rainfall. We registered a total of 1.33 inches in the rain gauge, compared to the normal 2.67 inches for the month of April.

We also only had nine days of measurable rainfall over the whole month. Take a look at the graph below, which shows the number of days in the month of April with greater than or equal to 0.01 inches of rainfall since 1999.

The nine days of rainfall is actually the lowest since before 1999 at Paine Field. Before this year, 2016 and 2004 were tied with the lowest at just 10 days of greater than or equal to 0.01 inches of rain. In terms of the total sum of rainfall over the course of the month, April 2021 ranked second lowest, with 2004 holding first place (with just a half-inch of rain!).

The first weekend of May is expected to start with some potential excitement. An upper-level trough is expected to make its way over the region after Thursday’s frontal passage, as seen in the image below. 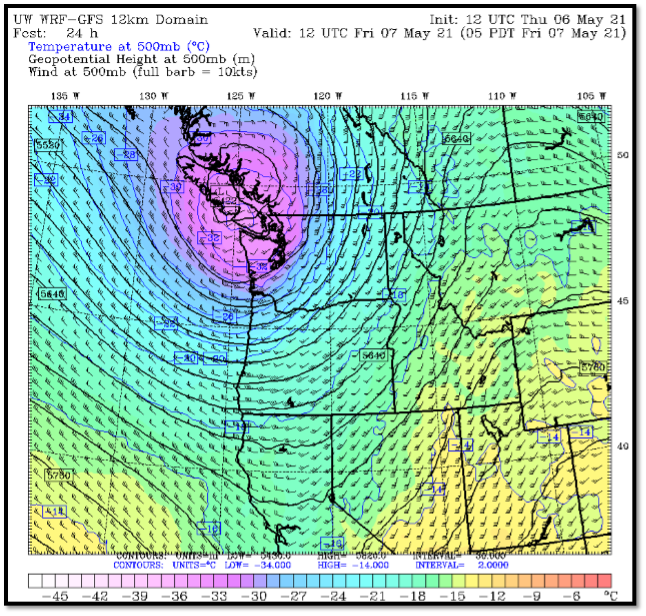 This trough will lead to showery weather for most of the day on Friday. In fact, the air is expected to become unstable after the front, potentially causing some of these showers to form into thunderstorms. Below shows a model image of Convective Available Potential Energy, or CAPE, for Friday morning. 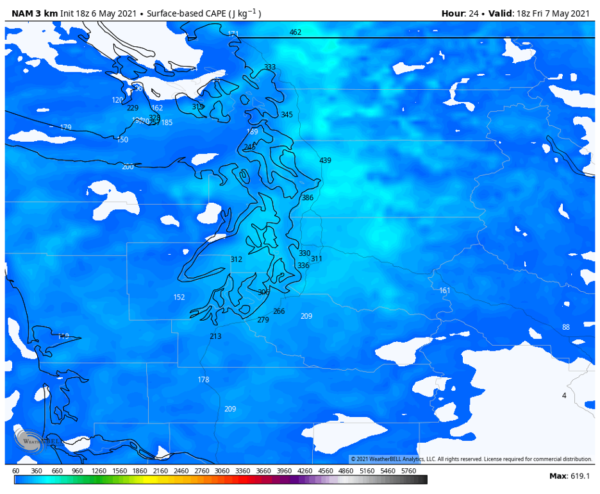 This particular model suggests the energy will be in place for potential thunderstorms to develop. However, whether or not we actually see thunderstorms is not solely dependent on CAPE. In order for thunderstorms to develop, you need three ingredients: moisture, instability, and a trigger/lifting mechanism. It’s not uncommon for us to have moisture, nor is it that uncommon to have somewhat unstable air. But it is difficult for all three ingredients to line up. Oftentimes, the lifting mechanism that leads to thunderstorms in our area is solar heating. When the sun heats the surface, it warms the air around it, causing the air to rise. Rising air is needed for potential thunderstorm development.

A common occurrence for us is that we are not able to get the lift required for storm development as a result of clouds blocking the sun from directly heating the surface. When the moisture and instability is in place, meteorologists in our area will often watch for sunbreaks as a potential indication of whether or not we will see thunderstorms. A thick layer of clouds that won’t budge will oftentimes suggest that we won’t see storms form.

At the moment, models are suggesting that there may be some breaks in the clouds, but it remains to be seen if those potential sunbreaks would be enough to spark a few isolated thunderstorms. Make sure to be prepared in the event we actually do see storms. Remember, when thunder roars, go indoors!

Most of the excitement of the weekend in terms of weather should be on Friday, with not much else happening the rest of the weekend. Expect some showers at times during the day on Saturday, with things mostly drying out by Sunday. Temperatures are expected to be a little below average for this time of year.

Looking ahead to the first half of next week, things are looking to be a bit more springlike in terms of weather, with temperatures returning to the 60s and mostly dry conditions. This is due to a ridge of high pressure building over the area. We just have to deal with a little bit of rain in the meantime.