The flagship policy recommendation from the Edmonds Citizens Housing Commission (CHC) is “missing middle housing in single-family neighborhoods.” This essentially recommends our city council craft a housing policy that would allow two townhomes/duplexes to replace one single-family home and it would do so citywide in all residential zones. This might seem reasonable in its most basic form if limited to this type of development only. The harsh reality is that this policy opens the door to a proliferation of “Track Townhome Developments” throughout Edmonds. This will tragically result in a very real decline in Edmonds’ livability, tree canopy, environmental protections and preservation of our small-scale, single-family neighborhoods.

I served on the citizens housing commission and as a result of my experience there, I developed and believe in an “Edmonds Kind of Townhome” policy.  I personally don’t have an issue with my neighbor’s house being plowed down and two townhomes or one duplex being established with a net equal footprint of the original home, yard and on-site parking. However, I do strongly oppose larger parcels and/or merging adjacent parcels being used to inject vast numbers of track townhomes into my neighborhood. This is precisely what is happening all over Seattle and what is turning its neighborhoods into chaotic and ugly spaces. To my fellow Edmonds residents, If the “missing middle housing in single-family neighborhoods” is adopted in its current proposed form, Edmonds will see that Seattle-style development allowed and even encouraged. Opportunistic and profitable track townhome housing will prevail and be coming quickly to Edmonds in many of our residential neighborhoods.

The Westhaven development recently completed in Edmonds gives us insight into how local developers are currently using adjacent parcel developments to create new housing in Edmonds. Three homes on larger parcels were acquired and redeveloped into 10 separate homes in an existing single-family neighborhood.  Builders often build to scale and build six or more homes at a time to save money and maximize profits. 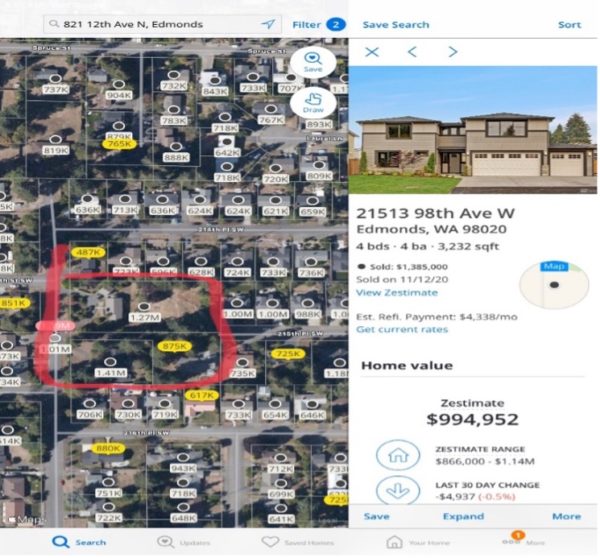 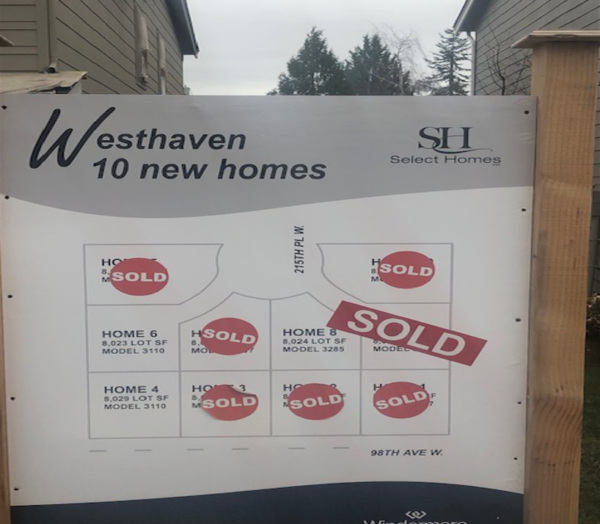 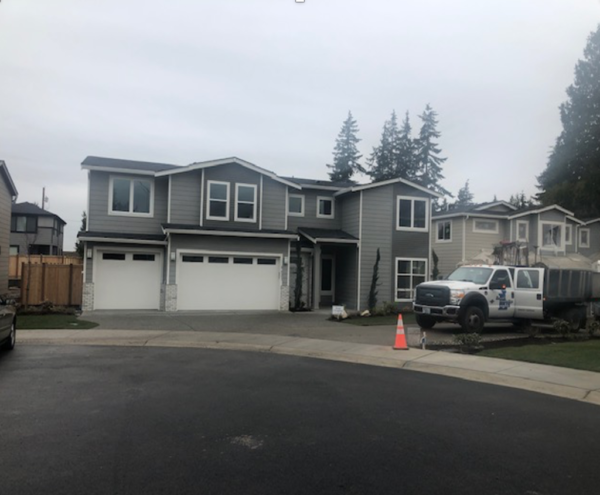 This higher-density development of Westhaven continues to provide three onsite private parking spaces and leaves an estimated 5,000 square feet of green space, which is adequate to plant and/or preserve existing trees (if such policies existed). Up to 30 additional car activities could be expected to be added to this neighborhood.

In contrast to the example above, in approving the CHC flagship policy (two townhomes/duplexes in single-family zones in all residential areas of Edmonds), the same development would have allowed for the construction of 20 townhomes instead of the 10 single-family homes. This is a profit-driven policy. The townhomes would have been less assimilated into the neighborhood with fewer yards and less onsite parking. In fact, the neighborhood would have been drastically altered to resemble a typical Greenlake-style residential setting. Imagine that now there would be 20 more families coming and going where once three families occupied the three parcels of space. If one is looking for something positive in such a scheme, it is that there would be an opportunity for buyers who could not afford the $1.2 million-$1.5 million (2020 pricing) for newly constructed single-family homes to possibly buy a $800,000-$1 million range townhome. The townhome may likely be the future of home ownership in our region, one which is very profitable for developers to build, as it allows them to build multiples at a time. We can see a current example in the Quantum home development in Perrinville, where there are 44 townhomes being constructed. Builders typically don’t build one or two homes at a time; rather they build at a scale to maximize profit and utilize limited construction labor and resources. Most townhome developments within single family neighborhoods build six to eight units or more at a time, a fact that was confirmed for me by a top townhome developer in Seattle.

The Brackett’s Corner development is the most recent track home townhome development in our city. It is worth examining to truly see what we can expect to  proliferate in Edmonds if the CHC flagship policy is adopted by a simple four-member majority vote of our current city council. 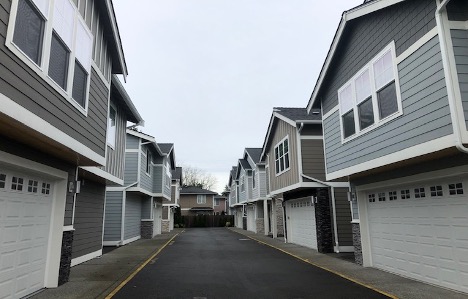 Visitor parking is limited in this design, one very small space provided between units. Almost no space to preserve and/or plant trees or preserve significant green space is afforded in this design. There used to be two commercial buildings on this parcel with large evergreen trees – see trees in the background – are they now next to go? I do feel this development is better than previous two dilapidated commercial buildings, and the units themselves seem very nicely built. The alarming factor is the layout and lack of moderation; this design would be so much better if it were 10 units not 14 and left more onsite parking and green space, about a 15-20% open space rule would have been prudent and assimilated into Edmonds better. Most developments in Edmonds, commercial included, only require 5% remain open/green space.

The Edmonds City Council and community have had the benefit of observing what has been done in surrounding communities and we should learn from their pronounced lack of moderation and what has resulted because of that. Citywide up-zoning in Edmonds will result in a proliferation of townhome track housing developments that are carbon copies of what Seattle has created. Big developers and investment companies love the huge profits created when very little open space and onsite parking are required. Edmonds needs to establish a ratio rule that would allow for more housing options and more capacity, but at the same time would achieve greater moderation and balance, allowing for the greater likelihood of green space preservation. Utilizing such a rule would also allow the housing capacity created to better assimilate into the mere 8-square-mile footprint of Edmonds, of which 30% is dense forest and other unique but sensitive environmental splendor such as streams, creeks and marshes.

By introducing moderation into the process, the city council has an invaluable opportunity at this critical point in time to reimagine how to increase our housing supply in a way that would help protect Edmonds’ character and livability. Setting a ratio rule standard would benefit Edmonds by removing some of the angst and fear around the policy of “up-zoning.” Instead of allowing a builder to tear down three houses in Edmonds (illustrated by the Westhaven case study above) and build ten larger single-family homes (or 20 townhomes if council approves a policy allowing such), it would be a more prudent policy to inject moderation into the process with a ratio rule and also setting a 5-15% larger open space requirement that reflects Edmonds’ scale and sensitive environmental location. Another reasonable idea is to allow a developer to build a maximum of six homes of any shape, type or size based on what was already established on the three parcels in this example, versus simply letting the developer manipulate the size of the land, through clever parcel mergers and unit lot subdivisions, to build on every square inch of the property. It is not a reasonable idea to suggest that paying high fees for removing larger established trees will save Edmonds’ environment, nor will installing modern retentions systems that slowly drain water into Puget Sound as opposed to water being consumed by thirsty trees and green spaces.

A ratio rule policy would lead to moderation in development and protection of the environment by limiting impervious area proliferation. A policy that requires that, when three houses are demolished and replaced, it is with six new homes rather than 20 townhomes or 10 larger single-family homes. This is a reasonable policy because it allows for an increase in our housing supply but at the same time it is thoughtful and respectful of our fellow residents and neighbors and, most importantly, our environment. Regardless of how it is labeled, whether it is called “affordable housing,” “missing middle” or other subjective labels, 20 homes replacing three in any Edmonds neighborhood does not assimilate well into the character, livability and fragile environment of Edmonds. All should agree that it does not live up to the expectation you held for your neighborhood when you sacrificed and made the commitment to acquire a house here or chose to pay higher rent to make Edmonds your home.

If the reason to up-zone our entire town is to provide more and varied housing options, then there is an opportunity to do just that, but also to curb over-development profiteering by setting standards that our surrounding communities missed. We cannot afford to simply make a carbon copy of what other communities have mistakenly and regretfully done and what state and regional powers are pushing us to do. What is wrong with some moderation? Edmonds can and should do a better job sharing its community and providing more housing opportunities, but there is no need to overcompensate at the expense of our livability and environment, and certainly no need to emulate what has regrettably been done in Seattle. We have seen people moving to the suburbs and other cities to escape what has been done in Seattle. Be very clear that we are accelerating towards a “Seattle-style” housing policy with this blanket solution to providing housing options in Edmonds along with the huge assumptions on what zoning changes can realistically solve and/or provide. Our Edmonds community is at a very critical junction.  I am asking council to consider ratio rules and larger open space requirements (plus 5-15%) on all developments, commercial and residential a like, before implementing any large-scale zoning density changes.