Edmonds musician Nick Baker is known to many for his support of seniors — bringing music, piano and vocals to them and lifting spirits. What is less well known is that in pre-COVID times, Baker has also traveled the world with a performance band called United by Music North America.

Baker will once again takes the stage with United by Music, playing two shows with other group members — some traveling in from the East Coast — at Fest4ALL Make Music Day in Gig Harbor Monday, June 21.

The international celebration is held on the longest day of the year — the Summer Solstice — in 1,000 cities around the world and online. 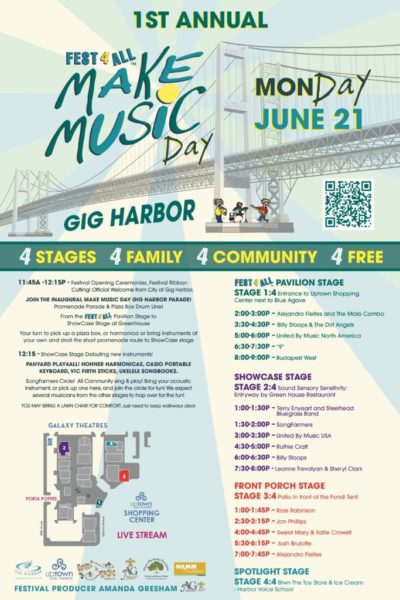 United by Music North America’s members play a blend of blues, soul and rock ’n’ roll. All the festival bands are chosen not only for their music but also because they value inclusion and accessibility. Producers have a commitment to growing this festival into a premier accessible, participatory and inclusion-focused entertainment destination.

Baker will be performing with his bandmates from Kentucky and Florida — Marlana VanHoose and Trey Wanvig.

Baker has been a member of United By Music North America since 2012 and has performed in public venues like the Waterfront Blues Festival in Portland, Ore,,  and the International Blues Challenge in Memphis.

In years past, he joined the Puget Sound group’s band members to celebrate Make Music Day at live performances in Portland. Due to COVID, the group’s participation for the past two years have been“virtual” events, so the group is looking forward to being in front of a live audience again in Gig Harbor June 21.

All in attendance can expect to be welcomed to hop into the Inaugural Fest4All Make Music Day promenade parade during opening ceremonies. Get your pizza box and drum stick and join the Pizza Box Drum Line, led by the Gig Harbor Ukulele Allstars. The short parade will kick off with a rousing version of “When the Saints Go Marching In” as the participants wind their way through the lovely Uptown Gig Harbor sculpture and water feature Pathways, ending up at an additional staging area where the community will gather for a “SongFarmer” circle of shared music.

Full festival schedule and details may be found at www.makemusicday.org/gigharbor. You can also join in via the Facebook live-stream at www.facebook.com/ubmna