Standing on the shoreline at Brackett’s Landing North in Edmonds, you are surrounded by soft sand, smooth rocks, sculpted driftwood, and shimmering seawater. Visitors chatter excitedly as they walk by the water, and the air is sweet with salt. We are lucky to live in the Pacific Northwest with amazing beaches and scenery. Just below the surface of Edmonds Underwater Park lies a whole different world. 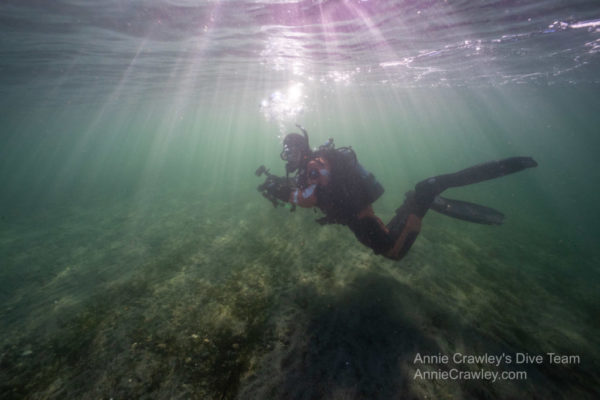 My name is Danny and I am 14 years old. When I began scuba diving, I had no idea how it would change my life. I am fascinated by the many creatures that make their homes in the water, many of which I would not have known about if I didn’t dive. From land, our interactions with the marine world are limited compared to when we go underwater scuba diving. Diving has opened my eyes to this totally different underwater world. Through my frequent diving at Edmonds Underwater Park, which is like my own underwater backyard, I have developed a special interest in studying crabs. 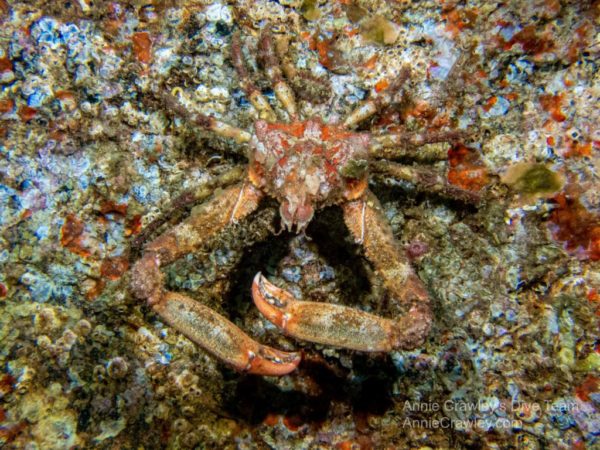 At Edmonds Underwater Park, we see over 12 different crab species. Some of my favorites include red rock crabs with two massive crushing claws and decorator crabs that disguise themselves with algae, barnacles, and even tunicates. Crabs look like aliens from outer space. Crabs are arthropods, which means they are an invertebrate animal with an exoskeleton which means their skeleton is outside their body. They also have a segmented body with four pairs of jointed legs that enable them to move swiftly through the water. For example, if you get too close to a crab, it will often scurry away sideways. All crabs have one pair of pinchers or claws that they use for a variety of reasons: to feed, decorate, or defend themselves. However, it is not uncommon to see a crab with only one or even no claws because they were torn off in a fight, but they are able to rejuvenate these as they grow. 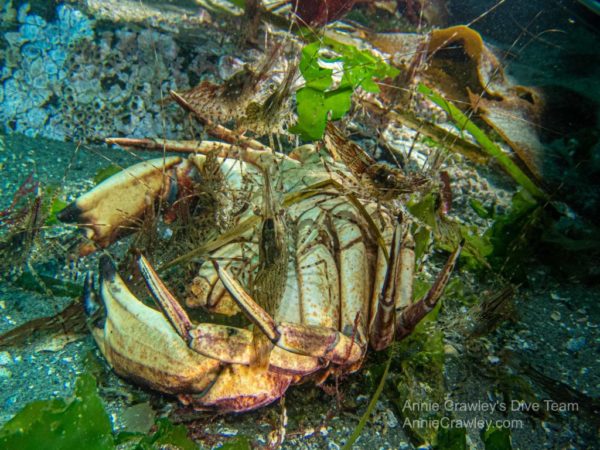 When I dive, I find crabs crawling along rocks, kelp, and sand. They are all different shapes, sizes, and colors. Since I started learning underwater photography, I have become more observant of animal behavior and lifestyle. Most of the crabs in the Salish Sea hatch from eggs. After hatching, the crabs turn into a larva form called zoea. While in this stage, the zoea are about 1 millimeter in size and barely able to swim. Zoea live suspended in the water as plankton. When the crabs grow to the size of a penny they change. The crabs continue to grow. As they become juveniles, they settle from the water column onto the reef. Some juvenile crabs seek protection and a free ride on egg yolk jellies. Adult crabs eat clams, mussels, other crustaceans, and small fish. They dig eel grass roots and feed on other dead animals. 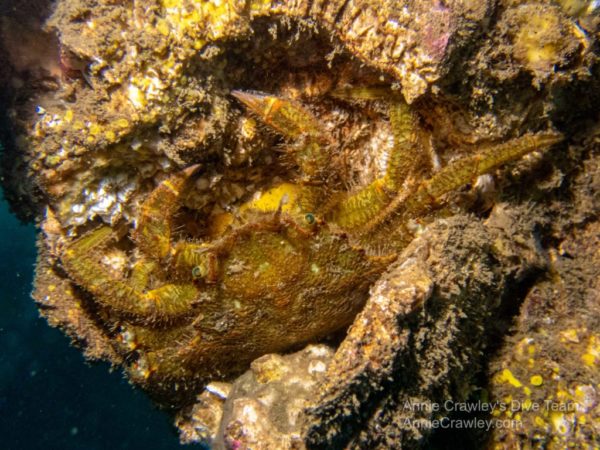 Crabs have an especially interesting growth process called molting. A crab’s body grows but its exoskeleton does not. During molting, the crab’s exoskeleton separates from the new one that grows beneath it. The new exoskeleton absorbs water and becomes larger, pushing away the outermost exoskeleton. This causes a split at their molt line on the crabs’ bellies. The new and extremely soft crab now has the flexibility to back out of its old shell. Juvenile crabs can molt up to 6 times a year. During the molting process, crabs are extremely vulnerable to predators because their soft shell offers limited protection. The biggest crab in the Northwest, the Puget Sound king crab, can grow up to 30 centimeters wide!  Not all crabs molt, however, and some remain in the same exoskeleton for their whole adult life. 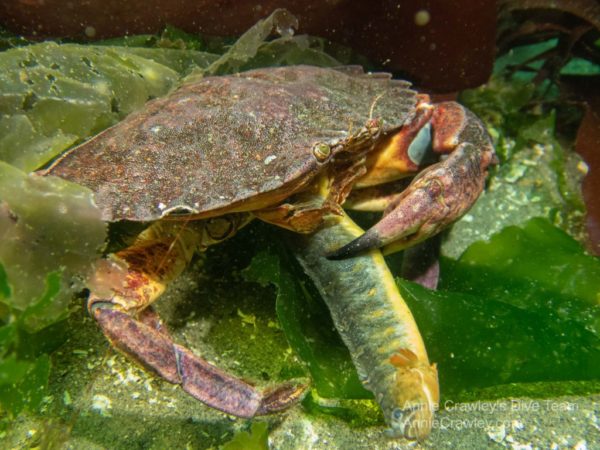 Most people are familiar with crabs like the Dungeness or red rock crabs because people catch them in pots or buy in their local grocery store. These species are commercially important, but are threatened by the changing climate, ocean acidification, and overfishing. Please keep in mind that Edmonds Underwater Park is a marine reserve and protected area so fishing and crabbing are not allowed. 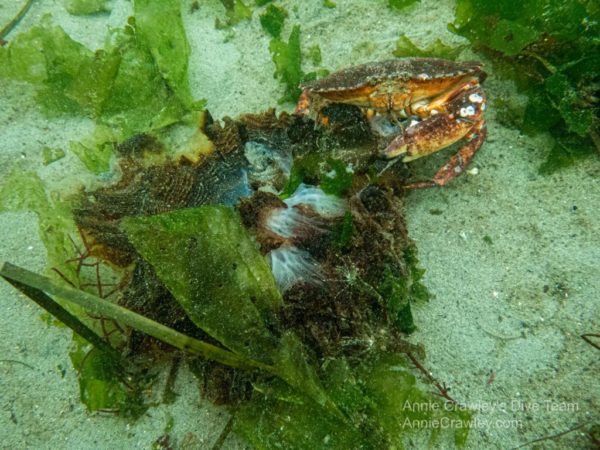 Crabs are under serious threat from ocean acidification, which is the result of too much carbon in the atmosphere. When we burn fossil fuels, we send carbon dioxide into the atmosphere. The gas dissolves into the ocean and undergoes a chemical reaction with seawater, forming an acid. The acid releases hydrogen ions, which zip around in the water and like to bond with molecules such as carbonate. However, crabs and other shellfish need carbon to build their shells (calcium carbonate). When hydrogen bonds to carbonate, it forms another acid and shell-building creatures can no longer use it. The loss of carbonate in the water is making it difficult to these animals to build their hard shells, and they are suffering. For example, crabs have softer shells making them more susceptible to disease. The acidic water also affects the crabs’ sensory organs and larval development. 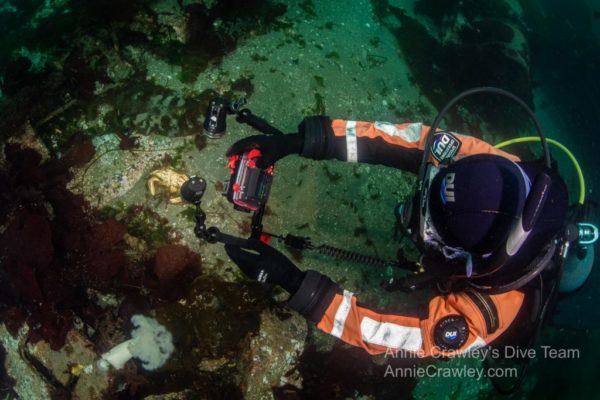 In addition to being commercially important for humans, crabs play an important role in the ecosystem by recycling nutrients. As scavengers, crabs eat dead and decaying material, and turn it back into usable organic matter for the ecosystem. Biodiversity is important to the ecosystem, too, and by having more unique species present, the ecosystem is more resistant to destruction. We’ve never seen an adult Puget Sound king crab at Edmonds, but we have found juveniles. As juveniles they are smaller than your baby fingernail. As adults they change, becoming extremely robust and multi-colored red, orange, and blue. Surprisingly, they blend in well with their environment. With their large and slow-moving bodies, Puget Sound king crabs are victims of fishing bycatch and their populations have suffered immensely.

I love seeing all of these species of crabs at Edmonds Underwater Park, plus many other interesting and fascinating creatures. Edmonds Underwater Park is our backyard. We need to protect this area so we can continue to enjoy the amazing life that lives here. With millions of exciting things to explore, come celebrate the 50th anniversary of the dive park with us, and learn something new on every adventure!

Danny Stephenson lives in Lake Forest Park and is an eighth grader at Kellogg Middle School in Shoreline. He started diving in 2019 and is currently a PADI Advanced Open Water Diver, working to master his underwater photography skills. He loves to shoot photos of crabs and anything macro. You can find Danny swimming through the plumose sea anemones that cover the De Lion Drydock, his favorite spot, or observing the lingcod around the Lopez Pontoon.

8 Replies to “Our Underwater Backyard: Crazy about crabs”