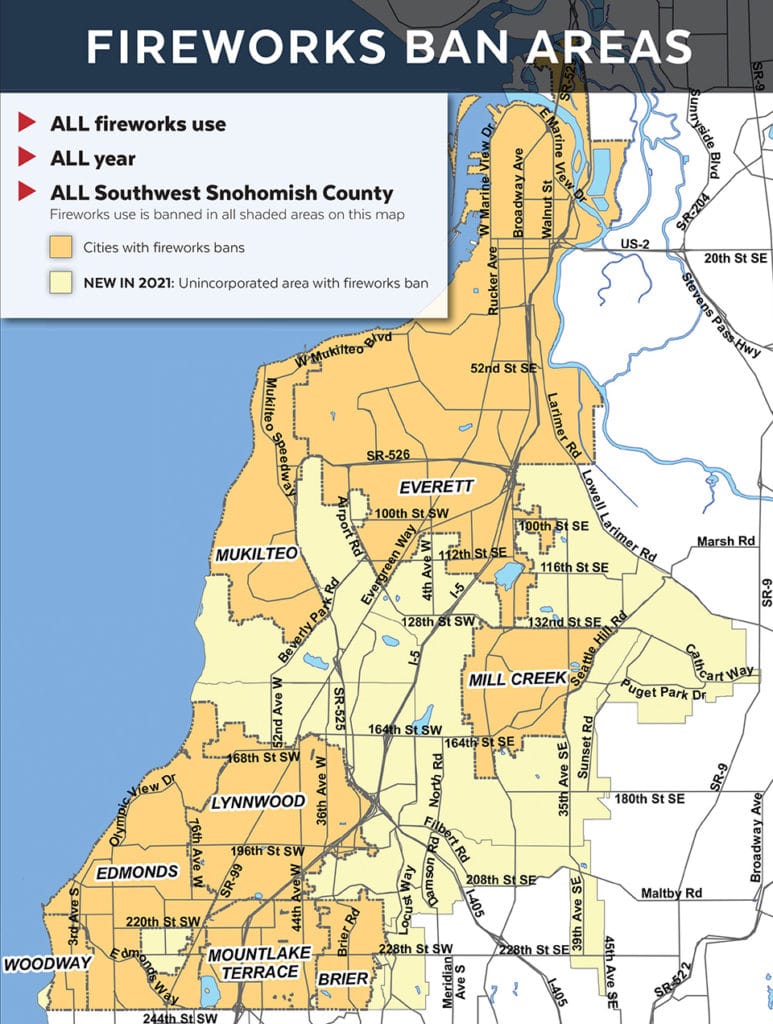 If you are planning to launch fireworks to celebrate the Fourth of July this year, take note: Fireworks use is banned in unincorporated areas of southwest Snohomish County, and there is now a $500 fine for those setting off fireworks in Edmonds.

In addition, those setting off fireworks in Edmonds now face a stiff penalty if they are caught. The Edmonds City Council in September 2020 voted unanimously to get tougher on those who set off illegal fireworks in the city — to the tune of $500 for a first-time offense.

Under the amended fireworks code, a first-time violation is now considered a non-traffic infraction. Those getting caught a second time — or more — within five years can be charged with a criminal misdemeanor, punishable by a fine of not more than $1,000 and/or 90 days in jail.

Previously in Edmonds, violating the fireworks code was a civil matter subject to a fine of $50 for the first offense, $100 for the second offense, $150 for the third offense and $200 for each violation thereafter within a three-year period.

The Edmonds Police Department plans to have an increased presence in the city between now and July 4 to deter the use of consumer fireworks and enforce the ban.

“Edmonds PD will be focusing on education of the new fireworks fines and penalties ahead of and on the Fourth of July,” said Acting Chief of Police Michelle Bennett. “We hope that this education will lead to voluntary compliance and respect for the safety and property of others. When calls of fireworks violations are received, officers will investigate and enforce laws as appropriate.”

In the City of Lynnwood, setting off fireworks illegally is a misdemeanor that could result in a potential fine of up to $1,000 and 90 days in jail, but the Lynnwood Police Department “focuses primarily on education and voluntary compliance,” Lynnwood spokesperson Julie Moore said.

Discharging fireworks is also a misdemeanor in the City of Mountlake Terrace, but Police Chief Pete Caw said the city prefers “to adopt a case-by-case approach to enforcement in all misdemeanor cases.” Police will be adding extra patrols on July 4 “in order to address any violations,” Caw said.

Fireworks are also banned in the City of Brier.

The county ban applies to the densely populated unincorporated areas within the Southwest Urban Growth Area. The Snohomish County Council unanimously approved this ban to begin in 2021 after voters weighed in on the issue in a 2019 advisory vote.

“More than 59% of the ballots cast in the South County Fire service area supported banning fireworks. We ask residents to respect the will of the voters, your neighbors, and the ban this Fourth of July,” said South County Fire Chief Thad Hovis.

South County Fire has created yard signs for residents to show their support of the fireworks ban. Free signs can be ordered on their website and they also have free digital downloads to self-print. Further information and resources about the fireworks ban can also be found on their site.

The Edmonds Chamber of Commerce does plan to have a public fireworks display on the evening of July 4 from Civic Field. People may gather at or near the field to view the show in person or they can watch a planned live-stream online.

“Last year there was a dangerous increase in injuries and property damage from the use of fireworks in our region. We want our residents to enjoy the Fourth of July safely and responsibly,” said Edmonds Mayor Mike Nelson.

To report noise complaints or illegal use with no fire, no injury, and no immediate threat, call the Snohomish County 911 non-emergency line, 425-407-3999.  Call 911 for emergencies when there is an immediate threat to life or property, including a fire or injuries.

When calling the non-emergency line, expect to be placed in a queue until a 911 dispatcher is available to answer your call. Dispatchers handle both 911 and non-emergency calls.