The national debate over equity, social justice and policing is now an Edmonds debate. My Edmonds News has launched a series of stories to examine what is at stake and how the dialogue could change the city’s approach to policing, equity and social services.

You can read Part 1 of this series here , Part 2 here and Part 3 here.

The “front lines” in police work are changing nationally and locally. In a growing number of communities, police are teaming up with social workers and health agencies to work with people who have mental health, behavioral, social or addiction issues. What will Edmonds do?

It is a late night. Edmonds officers are trying to move a homeless man who is sleeping, curled up next to a building where he shouldn’t be. They eventually convince him to move on. This may not be a typical call-out on most nights, but Edmonds cops can name almost every homeless person or individual they contact who has mental, behavioral, substance abuse or other health issues. Some they see time after time.

Officers can tell you where these people sleep, what their history is, why they live on the streets of Edmonds. Cops can spend hours trying to sort out the social and mental issues they respond to.

In the past, Edmonds has been part of two social services programs.

The Chronic-Utilizer Alternative Response Team or CHART, is a consortium of Edmonds, Lynnwood and Mountlake Terrace police, South County Fire, Verdant Health and Swedish Edmonds Hospital. CHART’s focus, according to their documents, is on reducing cost and looking at efficiencies in social service care. Edmonds police said the only active contact they have with CHART is when social workers alert EPD that they are trying to find a missing client and ask officers to “put out the word” on the street so the person can make a doctor’s appointment or court date.

Until late 2019, Edmonds had a interlocal agreement to share the services of a social worker with the Lynnwood Police Department. The cities contracted with Compass Health, which, in turn, supplied the social worker to assist on police calls with people who had mental health, substance abuse or other issues.  Edmonds provided about 30% of the money and got a third of the social worker’s time. When COVID hit, and all cities were looking at their budgets, Edmonds decided to part ways with Lynnwood.

Cole Langdon, Commander of Lynnwood Police Community Health and Safety, oversees the social worker program. He said that there’s a lot of trauma in these people’s lives, and “we have to meet them where they are at and build a relationship.”

That’s where the front-line social worker pays off, Langdon says: “When a person is ready to engage, you’ve got to meet with them right away. If you don’t, they go back to drugs, or forget… we can’t wait for them to come to us.”

Mayor Mike Nelson, in a March interview with My Edmonds News, said he sees a different role for the future position: “As we bring on a social worker, they are going to tackle a broad range of things – food assistance, to housing to mental health to senior needs to disability services – I mean it’s a wide assortment of things.”

Early in 2020, the city began expanding its social services role. It hired Mindy Woods as program manager. She handles referrals to services for vulnerable populations; seniors, the housing challenged, the disabled, veterans and those with mental health and substance abuse issues. Woods is part-time, 20 hours a week.

Woods is also a member of the Edmonds Diversity Commission, a housing and homeless advocate, serves on the boards of human services and volunteer groups, a Navy veteran and single mother. She said, “I have experienced homelessness twice. I quickly learned that navigating the system and finding resources was challenging.”

As part of the 2021 city budget, the Edmonds City Council created a human services program, which is now part of the city Parks, Recreation and Cultural Services Department. That may seem an unusual home, but Shannon Burley, the department’s deputy director, said it fits because they are located in the Frances Anderson community center; there are hygiene facilities there and parks has larger infrastructure.

“We’re very much aware,” said Burley, “that someone in a crisis of mental health, suffering a trauma experience, or looking for help for domestic violence, or substance abuse needs immediate care.” What human services can do, added Burley, is coordinate care for those not in acute crisis —  find resources to help pay the rent so people do not become homeless, connect the disabled, veterans or senior citizens to programs they need to “help prevent that crisis.”

The city has budgeted $550,000 for human services. There is money and authorization to hire a social worker. The city is still searching for that person. Burley said the plan is for the social worker to be a “contract” resource, and the city is now interviewing four local health services agencies about providing that service.

Nelson in his earlier interview said that “the police contact is only a very small segment (of human services work), we are not going to limit it to just that. That’s why this person is not going to be embedded” (with police).

The mayor says his staff is looking at how other cities handle the social worker role. “It is a fundamental governmental purpose – a basic thing — to provide support to those most in need,” Nelson said. “It just hasn’t been a thing that this city has done but every other city does it.”

Bothell is one of those cities. Unlike what Edmonds is planning, Bothell does team mental health professionals with police to help persons with behavioral health and developmental disabilities. The city of 45,000 has 63 commissioned officers. Edmonds, with 42,000 people, has 58 cops. In 2017, Bothell partnered with Shoreline, Lake Forest Park, Kenmore and Kirkland to launch the RADAR program.

RADAR stands for Response Awareness, De-escalation And Referral. When a situation develops that warrants a ‘RADAR’ team response, two people – one the social worker, the other a trained officer, are sent. “We love it; the police officers love it… they appreciate and welcome having a mental health professional be able to respond,” said RADAR coordinator Cam Johnson.

Brook Buettner manages the RADAR program for the five partner cities. The operation she runs shares four part-time contracted social workers with the five police departments. They work staggered five-hour shifts, Monday-Friday, from early morning to late night. If a social worker is on duty — say in Bothell — and Shoreline has an emergency call, Bothell police will drive the social worker to the Shoreline scene. When they are not on patrol, social workers follow up to see if people previously contacted are getting the help they need. 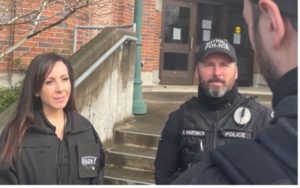 “By and large,” Buettner said, “the officers and navigators I have come in contact with are delighted to have the RADAR program. The longer we are here, the more referrals we get as people see the progress.” They hope to add more social workers and would like to make them full time. RADAR operates on a $470,000 budget for all five cities. About 90% of the budget is provided by two grants — one from King County, the other from the Washington State Association of Sheriffs and Police Chiefs. Each city contributes a small share.

RADAR calls its social workers navigators. They help navigate people into community-based and long-term care systems. That, said Buettner, is designed to cut calls for police and to try to keep those they assist out of the criminal justice system.

In Bothell alone last year, the two-person RADAR teams worked with 126 people. Of those, 9% were homeless, 37% had a disabling behavioral health condition, and 3% were veterans.

The RADAR program grew out of a collaboration with Shoreline police and George Mason University’s Center for Crime Policy and the National Police Foundation. In 2019, two years after the creation of the RADAR team approach, a George Mason University study found that a majority of Shoreline officers “viewed RADAR favorably, and believed the program contributed to their job satisfaction and effectiveness. RADAR deputies surveyed after RADAR implementation were also significantly more likely than those surveyed during the planning phase to feel empathy for people with BH/DD and significantly less likely to have used force against them.”

The report also concluded that the RADAR program had a “positive influence on Shoreline Police Department’s culture in terms of changing attitudes and responses…” It cautioned that it may take years to see the full effects of that culture change but said “the trend points in the right direction.” Buettner, who oversees all five partner cities, said that “being a RADAR deputy in Shoreline has become a ‘badge of honor.'”

Mayor Nelson has said he wants to expand the social worker role to help vulnerable people. He has also said that a social worker will not be embedded with Edmonds police.

The members of the Edmonds Equity and Social Justice Task Force took a different view in their January 2021 report, recommending that “Integration of a social worker(s) into community policing; social services will remove current pressure on police to work in an area where they are untrained and need assistance.” 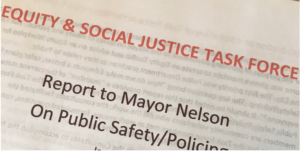 “A social services worker will be hired, and community policing activities will be taking place; police will be trained in both working with the social worker and in public safety activities with everyone,” the recommendation continued.

What finally happened to the homeless man

Solutions do not come easily. The homeless man, sleeping where he shouldn’t have been in Edmonds, is an example of that. He is autistic as well as homeless; he refuses to go to shelters or housing programs; he is articulate; he is not someone you might think of as vulnerable when you see and listen to him.

Yet, after three weeks of police contact with him, a citation for sleeping in a city park, a meeting involving the police chief, mayor, city attorney, the human services coordinator and other staff, the city decided to arrest this man. He spent a night in jail and now has a court date. Edmonds Acting Police Chief Michelle Bennett told us, “it’s not being heartless, or we don’t care; the services are there; he didn’t want them.” Her officers, she said, had to follow the law.

This is just one of the vulnerable people in Edmonds. No one has yet found a solution to keep him safe.

(P.S. There is much more to this homeless man’s story. We will have a follow up soon.)

We will complete our series of articles on the future of policing in Edmonds with Part 5: Searching (again) for a police chief.