I want you to meet someone; someone you’d probably never see as you move around Edmonds.

He is autistic. He is homeless. He has been a civic headache for Edmonds. His situation has left the city baffled; one social service worker admitting we “don’t know what to do for ‘Charlie’.”

The city’s dilemma has involved the mayor’s office, police, the city attorney, social workers, the parks department and Edmonds’ fledgling human services office. Edmonds has spent dozens of hours across all those departments to try to resolve the problem of “Charlie.” And he is just one of a number in this area who are homeless, or living in poverty, or with mental health, drug or substance abuse issues.

Charlie is not his real name. We changed his name — he didn’t like that idea at all! But we want to do as much as we can to protect Charlie’s identity. We also are not publishing any photos that would identify him.

Before we meet Charlie, here is what this story is not.

Charlie’s story, at heart, is about us — about issues that resonate through many communities: mental health, homelessness, equity, the need for more human services. That is something we all have a stake in; we, as a society, don’t know what to do for the Charlies of our communities.

It was late night, in mid-May. Edmonds police had come to arrest Charlie because he was sleeping where he shouldn’t; tucked into a corner of the Edmonds Library Plaza. Police had been there a few days earlier to tell Charlie he could not sleep there; that it violated a city ordinance to be in a park after dark. To get him away from the library, police even paid for a room for a couple nights at a motel, so he could sort out what to do. But a day or so later, Charlie was back; so were the cops. This time, they cited him for violating the city ordinance. He tore up the ticket. Officers warned him if they found him there again, they would arrest him.

A day later, he came back. So did the police; this time, five officers. My Edmonds News has seen police videos of the arrest. Charlie was asleep. They handcuffed him as he was waking. There was no use of force. He did not resist. He did yell and curse at them. He worried he would lose all his things. 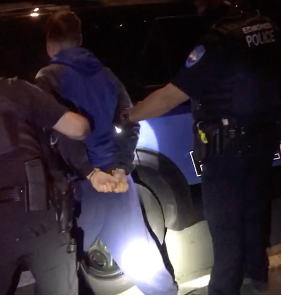 They helped pack up his belongings, helped him into his shoes and took Charlie to Snohomish County Jail. As they left, he told them, “I’ll be out in the morning…”  And he was.

A call from an Edmonds couple who have befriended him and tried to get him help alerted me to Charlie’s story. Don and Sandy Kinney are long-time Edmonds residents. Don has been an Edmonds police officer for 25 years; Sandy is a veteran social worker with the State Department of Social and Health Services.

The Kinneys are blunt about the way they feel Charlie has been treated. “Edmonds doesn’t want to admit to having homeless,” said Sandy. “Criminalizing people by arresting them is not the way.”

Don even emailed his boss, Acting Police Chief Michelle Bennett: “Our city/society has clearly stated that they want us to handle things in a different manner, and not make a mental health issue a criminal matter,” he said.

Chief Bennett told us: “It’s not being heartless, or we don’t care; the services are there.” Charlie, she said, is a person who “doesn’t want them.”

That is true; it is a big part of the problem of finding help for him and others like him.

Charlie is autistic. He told me he’s also been diagnosed with Attention Deficit Disorder (ADD) and Attention Deficit Hyperactivity Disorder (ADHD). Drugs? Alcohol? “I was not a drug addict or an alcoholic,” Charlie emphasized. “Drugs were the devil.” Police interactions with him confirm that.

Charlie didn’t come from somewhere else. He was born in Snohomish County. His mother, he said, couldn’t take care of him; as a toddler, he went to live with an aunt and uncle in Lynnwood. What followed, he said, were some juvenile scrapes, a first job and a bank account at 14, dropping out of high school. On June 8, 2001, at age 15, he remembers he was sent to his first group home, where he was “supposed to learn to know yourself better and love yourself.” He would run away; the cops always brought him back.  “On the other side of the mirror,” Charlie told me, “it’s not always a pretty picture.”

Charlie, Don, Sandy and I talked more about that over dinner in a local restaurant. His autism makes him wary of many people. He said he wants to live on his own, alone, in a place that is his. Social workers have tried to find housing, but he refuses to go back to a group home; he won’t go to a shelter; and with no drug or alcohol issues he doesn’t fit in “clean and sober” housing. When Don asked why he didn’t want to share a place with someone, Charlie put it this way: “When I get amped up, I drive my music as loud as I want it. Nobody else could handle it.” His hands made restless jabs, reinforcing the passion in his words.

Charlie has a new Chrome book that the Kinneys bought him. He mixes music tracks, his passion. He proudly showed me one of countless notebooks, crammed with what Charlie said was “coding for websites I carry in my head.”

And he sounded off about the “system” — social workers, group homes and rules that he says limit his freedom: “You know between the 19 years I was put away I was never listened to,” he said. “They tried to own me.”

“There’s really no freedom in the entire system,” he added.

But Charlie’s idea of freedom sometimes does not mix well with others. At the library, Charlie startled caterers who were showing the site to a couple who wanted to get married on the plaza. He frightened some Frances Anderson Center workers when he asked for a broom to tidy up his “place.” He said he got “frustrated.”Police and others say that’s when Charlie yells, curses and can be intimidating.

In an email, one officer described Charlie: “His behavior is bizarre to people he encounters, but rarely criminal or truly threatening.” But, that note was written before Charlie verbally threatened his social worker, saying that if he had a gun, he’d come after her. That, said Chief Bennett, is a felony threat, but the social worker did not want to press charges. The social worker asked police to take Charlie to Swedish Edmonds Hospital to involuntarily commit him. Officers refused, saying Charlie does not fit the criteria for commitment. She then urged that they get him to agree to stay voluntarily; they warned he would walk right out.

“When there is someone that is homeless and wants help,” Bennett said, “we will do everything to help them… take money out of our own pocket…to help.” But, Charlie has refused to accept housing that the system offers. And, so, he is homeless. “It’s not illegal to be homeless,” said Bennett, “but the balance is you can’t harm other people in your choices.”

What do we do for Charlie and others with similar disabilities? Lisa Edward, superintendent of South Snohomish County’s Verdant Health Commission, warned “there’s more than one Charlie” in our community. “These are individuals with complex needs that cannot be addressed in traditional health care or social services,” she said.

Verdant is seeking social work partner agencies to work with people like Charlie, who put extra stress on the police, fire and hospitals time after time. “We’re asking the question — what is the most innovative and creative way to work with these people,” Edwards said. They do not have the answer to that — yet. “All we can do,” added Edwards, “is extend the invitation, we can’t force them.” Verdant does help fund two crisis social workers with South County fire medics, and Lynnwood and Mountlake Terrace share another health care professional to respond on mental health calls.

In another email exchange, Edmonds Assistant Chief Alan Hardwick defined Charlie’s behavior this way: “The truth is that (Charlie) knows the boundary and has learned to exploit it. Any housing assistance must be coupled with the requirements of treatment, otherwise we are creating a dependency that will only get worse, since he consistently demonstrates escalation in his behavior when he is told no.”

In May, Verdant social worker Nancy Budd, in an email to the city, suggested that if Charlie were arrested and ended up at the Snohomish County Jail, “I work closely with the public defender’s office, and could get him started with various programs while he is an inmate.”

That is exactly what Don and Sandy Kinney don’t want. Don Kinney sent this email to his chief, Michelle Bennett: “We need to develop a game plan to deal with (Charlie) in our community, without throwing him back into a system. He will just get out and have more distrust of that system.”

Bennett responded: “I hope we will all take this disheartening situation and turn that energy into action that can assist (Charlie) without negatively impacting other members of the community, violating park code, or breaking the law. Thank you again for the care you demonstrate consistently for (Charlie) It does not go unnoticed.”

Charlie has stayed away from the library. Edmonds police report no new contacts with him. However, Don and Sandy told me that, until recently, Charlie still had been living “somewhere in Edmonds” in his tent. 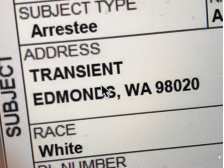 Some other things have changed. In May, in municipal court, Charlie pleaded not guilty to his arrest charges. A week ago, the city asked to dismiss the charges, saying that Officer Kinney had assured them that Charlie was now in housing and receiving services he needs.

The housing is only temporary, in a motel. Don and a social worker helped get Charlie some Supplemental Social Security payments he was owed. Charlie is paying for the motel while his money lasts. He donated some of his money to the facility where he showers; he donated money so another homeless man could recharge his bus transit card, and he donated clothes he no longer needed. He even fulfilled one of his dreams and took Amtrak to Wenatchee to visit.

But when he gets back, there is still no long-term solution about “what to do for Charlie.” He still does not fit into the usual social services programs. “We expect one size fits all,” Sandy said. “He’s somebody that’s a throw away, a throw away in our system.”

Bennett called it “an unwinnable solution… if their part is voluntary, and they refuse, there’s nothing that can be done.”

Lisa Edwards’ words echo loudest: “There’s more than one Charlie in our community.”

What do we do for them?

21 Replies to “What can we do for people like ‘Charlie’?”