Here are details about the Edmonds City Council primary election debate planned for Wednesday, July 14, at the Edmonds Center for the Arts:

Doors will open at 5:30 p.m., with the debate beginning at 6 p.m. at the Edmonds Center for the Arts, located at 410 4th Ave. N., downtown Edmonds. Immediately following the debate, an informal meet-and-greet event — where primary election candidates can meet one-on-one with voters — will be held in the ECA lobby.

According to ECA policy, masks are not required for fully vaccinated people attending the event, but are strongly encouraged. The ECA will also have the bar and concessions open, and those refreshments can be taken into the auditorium.

For those who want to watch from home, we will also be live-streaming the debate via YouTube. Please check My Edmonds News shortly before the debate begins to find the link to that live-streamed broadcast.

Both Positions 1 and 2 have three or more candidates on the primary ballot. The top two vote-getters will advance to the Nov. 2 general election.

This debate will be similar in format to the Edmonds Mayoral Debate that My Edmonds News sponsored in 2019. Each candidate will get a one-minute opening statement. They will then take turns answering a series of questions developed by debate moderator and My Edmonds News Publisher Teresa Wippel, based on suggestions from readers and from the following Edmonds civic organizations that are collaborating with us: the Alliance of Citizens for Edmonds (ACE), the Edmonds Chamber of Commerce, the Edmonds Civic Roundtable and the Edmonds Neighborhood Action Coalition (ENAC). The candidates will also get a one-minute closing statement.

Candidates who have confirmed so far for the July 14 debate are:

Position 1: Alicia Crank and Kristiana Johnson. Candidate Brian Hartman has not yet replied. 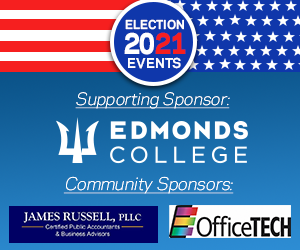