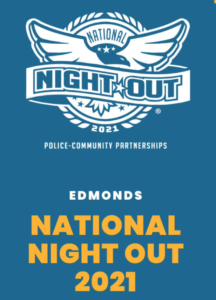 On Tuesday, Aug. 3, the Edmonds Police Department is participating in National Night Out Against Crime — a nationwide event that encourages neighbors to get out of their homes and meet one another in the name of crime prevention.i

If you want an Edmonds police officer to stop by your National Night Out event, email the EPD Community Engagement Team at CET@edmondswa.gov. The deadline to request an officer is Sunday, July 25.

In past years, the Edmonds Police Foundation hosted a separate Edmonds Night Out Against Crime event for the entire community at Frances Anderson Playfield, and it was traditionally held the week before the nationwide activities. That event was discontinued in 2013, although the police foundation did have an open house for its 20th anniversary in 2016, the foundation’s Gail Welfringer said.

Edmonds Acting Assistant Police Chief Josh McClure said that this year, Acting Police Chief Michelle Bennett directed the department to organize a National Night Out event simliar to those held in other communities. In that spirit, Edmonds neighborhoods are encouraged to host their own party — perhaps a barbecue or an ice cream social? — from 5-9 p.m. Aug. 3, with the goal of helping residents get to know their neighbors.

McClure noted that the department is in the process of hiring a civilian community engagement coordinator, and that person will oversee a more robust National Night Out event in Edmonds in 2022.