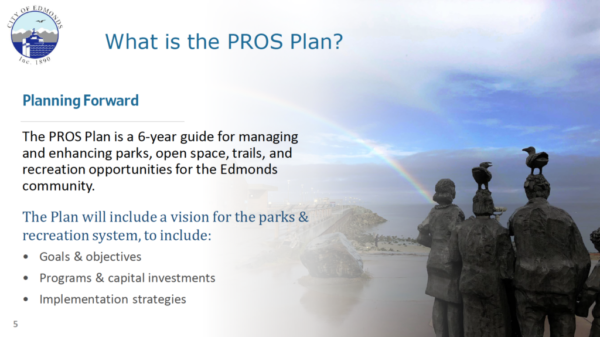 Like fireflies on a summer night, comments lit up the computer screen:

“…not enough activities for teenagers”

“…too much spent in the Bowl”

This was part of the brainstorming session of a virtual public meeting hosted Thursday night by the Edmonds Parks, Recreation and Cultural Services Department. They are asking residents to tell them what the future of parks, recreation facilities and open space should be. They call it the “PROS Plan.”

Once completed by the end of the year, the PROS plan will be used by the Edmonds City Council to approve changes and allocate the budget for those improvements or additions. The updated plan also keeps the city eligible for state funds.

The city is using polls to help narrow the choices for residents. Viewers were asked about the recreational programs, programs for children, community events, playgrounds and how they personally use the parks and recreation facilities and the various city-sponsored programs.

They have a total of 1,700 responses so far on the survey. The direct mail to households got an 18% response rate and other residents simply took the survey online.

Edmonds Parks, Recreation and Culural Services Director Angie Feser promises to stick with it. “We will continue to promote the online survey, some in-person visits to the Uptown Market, the Summer Market and at Anderson Center,” she said. “Our Facebook page has the survey and, of course, the Parks and Recreation website is the easiest way to find the survey.”

Edmonds is not starting from scratch, given the impressive numbers in the city’s presentation. Already the city boasts 47 parks, with 230 acres of parks and open space, 13 sports fields and 18 sports courts, four-plus miles of trails, a pool, six beaches, a fishing pier, and 73,000 square feet of program space.

The Trust for Public Lands compiles data from around the country on parks, and their website could be helpful in painting a bigger snapshot. For example, 76% of Edmonds residents are within a 10-minute walk to a park; but in Kirkland, often compared to Edmonds, that number is 96%. Olympia is comparable, but has a greater percentage of land used for parks. It’s just a snapshot that doesn’t tell the whole story.

“We have a mile of waterfront park you can walk down and touch Puget Sound. That’s a very different experience,” Feser points out.

So, the raw percentages do not reflect differences in amenities, types of parks or community events and activities offered in each city. Quality of the parks is not assessed, nor is whether you have to walk across a highway to get to a park.

The real question is how residents feel about their own parks and how they use them. 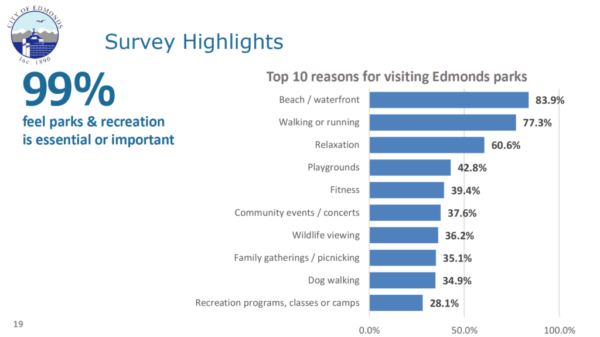 A sample polling question is posted, below. 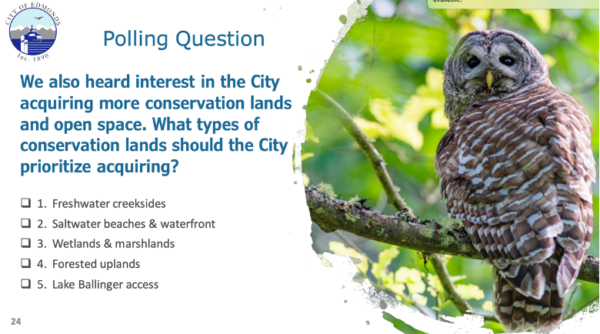 For Parks Director Angie Feser, this current assessment is a critical part of the process, “It is the city’s way of revisiting public priorities for parks, recreation and programs. It will give us a roadmap for the next 6 to 10 years. The work we do today may not take form for a decade.”

Reaching a wide audience is critical, she says, to get as much input as possible. That’s why the meeting was simultaneously translated, live, into three other languages: Spanish, Korean and Mandarin. This was a first for Edmonds. For those in attendance, on their computers, all they had to do was click on the language of their choice and they got clear, live, translations of every word.
See translation example below. 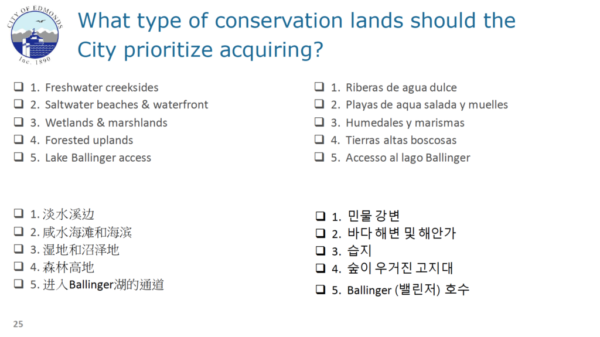 “We want to include all of our community and we recognize people in Edmonds speak Spanish, Mandarin and Korean and we want to include them.  We did a lot of written material in four languages, too,” said Feser.

At Thursday’s meeting, 17 residents were online with staff.  Feser isn’t swayed by the number, “We always want as many people as possible to attend, but it’s summer and people are on vacation, doing other activities and may be burned out on Zoom. It is just one way we collect information.” 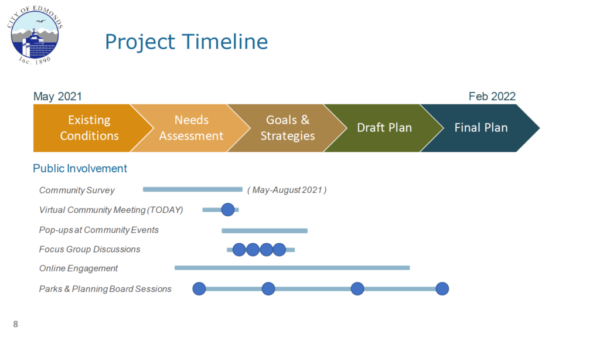 After more polling and discussion, city staff hopes to present it to city council in the first part of 2022.

One observer said, “Everybody should pay attention to this. What people do today is not for us, necessarily, but for our children and grandchildren.”