While there were no decisions made Tuesday night, the Edmonds City Council had a robust debate about the future of a redesign planned for Edmonds Civic Field. Among the issues: Whether the city should move forward at all with the downtown project, given its increasing cost, especially in light of the fact that there are pockets of the city — such as Edmonds’ Highway 99 neighborhood — that have very few parks nearby.

“The 22% of Edmonds that are people of color, predominantly they live up here,” said Councilmember Adrienne Fraley-Monillas, who lives near Highway 99. “Approving another park in the downtown is creating social equity and equality issues in Edmonds, as I’m constantly talking about.” The Highway 99 area has one park — Mathay Ballinger — compared to dozens located elsewhere in the city, she added. “I think we deserve to have a little bit of money spent up here vs. down there,” she added.

It’s been more than four years since the city council approved a plan for redesigning Civic Field, with the goal of transforming it into a downtown Edmonds park with range of amenities — among them, upgraded youth athletic fields and sports lighting, an inclusive playground, a walking path, a petanque court grove and a pollinator meadow. The city has been working since 2017 to find ways to fund the project — estimated in 2017 to cost $12.1 million. But now, with challenges related to site design and increasing construction costs, the project faces an even higher price tag of between $13.5 million and $15 million.

Civic Center Playfield was acquired by the City of Edmonds from the Edmonds School District in 2015 for $1.9 million; all but $400,000 was funded by grants. A master plan for the park was developed in 2016-17 with significant community input for the design. Included in the $12.1 million in construction funding to develop the park is $3.47 million in grants, $1.35 million in park impact fees and $400,000 in donations (including $258,000 from the Rotary Club of Edmonds to fund the inclusive playground). The remaining $6.9 million consists of bonds, and money from the city’s general fund and real estate excise tax revenues that were allocated in 2019 and held over each year. 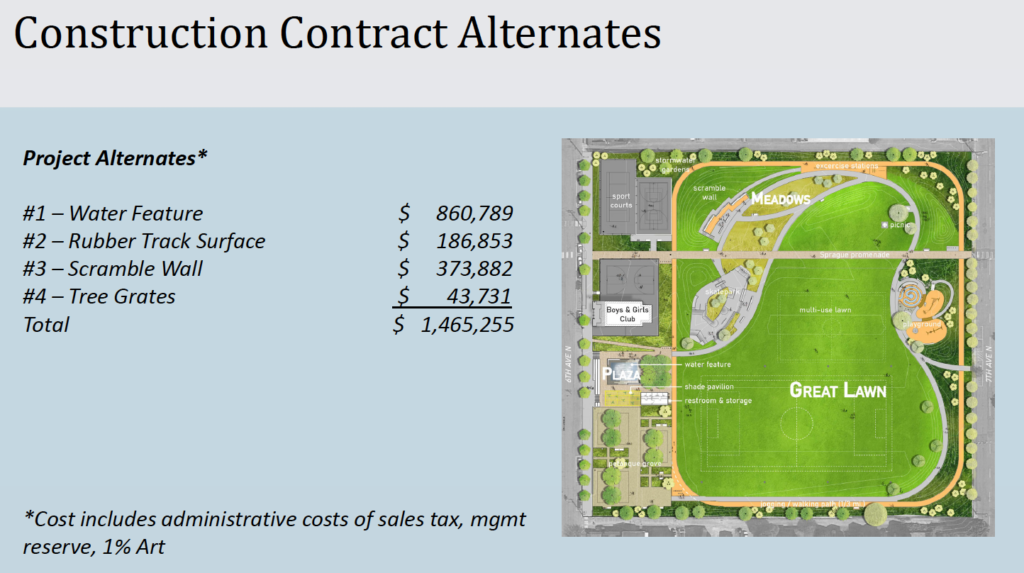 At next week’s meeting, the council will consider whether to award a construction contract to the low bidder — A-1 Landscaping and Construction — and approve the additional funding necessary via two other construction contracts to build the park. In addition to the base bid, the council will consider four bid alternates, each with an additional price tag. They include an interactive water feature at the park entrance, a scramble/climbing wall, a proposal to rubberize the current asphalt perimeter path and the addition of metal tree grates.

Councilmember Laura Johnson admitted she was conflicted about what to do next. She said her family had been very engaged in the outreach process for the new Civic Park design, but the equity issue is a concern. “As a councilmember, I wonder, do we have broad support for this across the community, or is it mostly in our downtown core?” she asked.

Councilmembers Luke Distelhorst and Diane Buckshnis expressed support for staying the course on completing the park project but agreed that the equity issue needs to be addressed with future park development. Both stressed that they see the issue not as one of “either/or” but of “yes and.”

Councilmembers Vivian Olson and Kristiana Johnson said that a better alternative to abandoning the park project entirely would be support the base Civic Park construction budget and eliminate some of the optional alternatives. The money saved could be put toward other needed park projects, Olson said.

“We’ve got a great project, we’re very far along in it,” Olson said. “And i really don’t think it’s prudent at this point to turn our back on the whole project.”

Laura Johnson said she wished the city was further along in conducting its outreach to community members regarding what they’d like to see in the city’s parks. The city has launched a community survey connected with updating the city’s Parks, Recreation & Open Space Plan (PROS Plan) — a six-year guide for managing and enhancing parks, open space, trails, recreation, and cultural arts opportunities.

She and Fraley-Monillas also said that the fact the city has already invested a lot of time and money in the project shouldn’t be an excuse to not consider scrapping the park renovation. “We’ve been deep in projects before and we’ve done a u-turn or where we’ve paused,” Johnson said. The proposed Edmonds Waterfront Connector, which would have provided emergency access over the railroad tracks, is a prime example of that, Fraley-Monillas said. “We spent millions of dollars on it…and we put a stop on it at the end,” she said.

In addition to the full council reviewing Civic Park construction contracts next week, the council’s Finance Committee will be asked to take a look at possible options for closing the funding gap. Among them: phasing construction to “pay as you go,” use existing city general funds or real estate excise tax dollars, and exploring funding through additional bonds or bank loans.

Prior to the 7 p.m. business. meeting, the council held a special meeting to discuss the logistics of resuming in-person meetings now that COVID-19 public gathering restrictions have eased.

The council agreed it will return to in-person gatherings starting Tuesday, July 20. These meetings will be a hybrid approach between in person and Zoom, in which all participants — councilmembers, staff and members of the public —  have the option of appearing in the council chambers or participating remotely.

The council also decided to stick with Zoom-only meetings for its three committees, which meet on the second Tuesday monthly. Council President Susan Paine was tasked with working out the logistics of how those meetings will be ordered, as well as specific start times.

In other business, the council unanimously approved a staff proposal to create a job order contracting program focused on quick engagement of contractors in performing small- to medium-sized public works projects. And it also unanimously approved an update to the City of Edmonds compensation policy, which will allow Human Resources Director Jessica Neill Hoyson to proceed with a study of the city’s current compensation practices.

You can watch the video of the council meeting here.