Being homeless in Edmonds doesn’t conjure up the feeling of an “Edmonds Kind of Day.”

But homelessness exists in Edmonds — the few people you see and the many you don’t. Now, the city is embarking on its biggest effort yet to respond to the homeless and people in crisis.

The Edmonds City Council just approved a contract with Compass Health to hire a full-time mental health professional; the first in Edmonds’ history. It also approved rehiring Koné Consulting to dig deeper into the scope of homeless in the city. These major expenditures are included in the $550,000 the city spent to create a new Human Services Division last year. That office has a lot of work to do.

The latest Edmonds homeless numbers come from that Koné Consulting study, delivered to City Hall in 2019. That study estimated 230 homeless residents in Edmonds. These are not people from “someplace else”; the study says that “the majority of people who are homeless in Snohomish County are from here originally.” 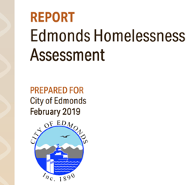 Here’s how the report calculated the homeless in Edmonds:

“Based on DSHS data on individuals receiving benefits, there are currently approximately 230 Edmonds residents experiencing homelessness, meaning they are without housing (ex. unsheltered or car camping), homeless with housing (ex. short-term hotels or couch surfing) or in an emergency shelter or domestic violence shelter.” (Koné Edmonds Homelessness Assessment – 2019)

The consultant also reported federal data that shows approximately 120 students K-12 who live in Edmonds are considered homeless because they don’t have a “fixed, regular and adequate” place to spend the night. Some, the study said, may be sleeping in a car, or are part of multiple families living together.

Now you see them — now you don’t

We don’t “see” many homeless people in Edmonds. But “Charlie,” the homeless autistic man My Edmonds News recently profiled, tried to camp out here. That got him arrested in May, then released, and we have learned that Charlie is back outside, somewhere in Edmonds in his tent.

Then, there is the woman who camped out on a bench located at 76th Avenue West at the Interurban Trail for several months with all her belongings. A man who asked to be described only as “an incredibly frustrated resident,” told My Edmonds News the woman could be belligerent, relating in one correspondence that “she was yelling at the top of her lungs ‘at the world’ for an hour tonight until almost 10 p.m.”

Shannon Burley, the city’s assistant parks, recreation and cultural services director, also oversees its new human services division. She admitted to that same frustrated resident in an email that the woman on the Interurban Trail is not considered a threat to herself or others; and that the city does not have a solution since the woman has refused to go to a shelter:

“The shelter with availability is in Everett and accepts two people per day,” she wrote in an email. “So, she would need to stand up there and wait in line for an interview, if not accepted that day then come back the next with no guarantee of ever getting in.

“The women’s shelter in Edmonds has a three-month wait and Monroe is full. We are in constant contact with many potential shelter options, but I will be honest, while some exist currently, they are not necessarily good options for stability or security.

“On Friday alone we were contacted regarding four separate individuals who are unhoused and needed help. I would imagine (city) Council is being contacted quite frequently regarding this challenge.”

Then-Acting Police Chief Michelle Bennett emailed that same resident, saying the woman “refuses any form of shelter. Currently, unless there was an ordinance related to public camping, there is nothing more that we can do to help her but to keep offering her help.”

Edmonds does not have a “no public camping” law.

In both cases, Charlie and the woman initially rejected social services and refused to move. Edmonds police found a motel room for a couple of nights for Charlie, but when he returned to camp on city property, they arrested him for being in a park after dark. Police also did help relocate the woman to a motel for a night. The next day, a neighbor told us, she was back hanging out along Highway 99.

According to the city, the woman was accepted into a program run by a local non-profit that provides long-term shelter and wrap-around mental health and social services. “The individual willingly accepted the support and is no longer unsheltered. These situations are challenging and take a tremendous amount of time,” Burley added. “Thankfully this one had a happy ending.”

Everett’s experiment for those who are chronically homeless

The City of Everett does have a “no sit – no lie” ordinance. Earlier versions ran afoul of court rulings that being homeless is not a crime and that the city could not arbitrarily boot squatters off the streets who had no place to go. The difference this time: The city partnered with Everett Gospel Mission to create “pallet shelters”– tiny houses – on property behind the mission, so those asked to move do now have an option. And the no sit-no lie rule applies only to one small neighborhood, which has been a hub, the city says, for violence, intoxication and vandalism.

Everett’s goal is to bring some stability to the chronically homeless and then connect them with services. Jon Hull supervises the shelter for the Everett Gospel Mission. “They’ve been able to stabilize, find comfort and peace,” said Hull. Residents help each other out, he said, adding that “a number have had interest in getting a job, now that they have a door that locks and their own place. They start thinking about more than just surviving day by day.”

The city committed $900,000 in grants and other money for this pilot project. The homes are 8-feet-by-8-feet; the mission provides security and access to showers and a clothing bank. Within days of opening last month, the tiny houses were full – 25 people in 20 units. It is just one idea, but Julie Willie, Everett’s Community Development Director, said that “so many little outcomes can change a person’s life.”

Edmonds’ only options for chronically homeless – the ones we see – is to transfer them (if they agree to go) to communities that have shelters, and as the city’s Shannon Burley said in her email above, Everett only takes two people a day, and “the women’s shelter in Edmonds has a three-month wait and Monroe is full.”

Under Edmonds’ new contract with Compass Health, the city’s human services division will hire a full-time mental health professional. City councilmembers told staff their priority is that the social worker will be “in close connection with the police department but NOT (their emphasis) how it was historically implemented” — in other words, not embedded with police.

According to Burley, Edmonds police participated in evaluating the selection of Compass Health and the development of the current contract “and we anticipate Edmonds PD having more access to our social worker this time around than the previous arrangement, in which Lynnwood had a significant portion of the social worker’s time. With Compass Health, Edmonds PD will have priority access to the social worker,” Burley added, “however we feel there may be additional time that the social worker can use to support the additional goals as laid out in the presentation for example:  homelessness prevention and housing preservation.”

The agreement also lays out that the social worker will “assist” police, fire and social services to help relocate people in need of shelter, medical attention, housing and other needs. What that assistance is has not yet been spelled out.

And, in the plan, Edmonds police are to “strive to provide additional safety during outreach which may have a potential for increased risk.” EPD will also “endeavor to provide transportation” in such situations. There are no details yet of how that would work.

That approach leaves Edmonds as the only South County community without a homeless/mental health response team embedded with or working exclusively with first responders.

Lynnwood has a police sergeant and two officers in their outreach team, and the department shares the services of a mental health professional with Mountlake Terrace police.

South County Fire also has two specially trained emergency medical providers and a captain for its community resource paramedic program, as well as a mental health professional from Compass Health. The program was the first of its kind in the state.

Everett, with a much larger chronic homeless problem, committed four officers, a sergeant and three health staffers – a social worker and two community outreach staff. It is, said the city’s Julie Willie, a highly trained group that knows and understands trauma.

The city’s goal in creating a human services division is ambitious:

“This program is intended to serve Edmonds residents in need of assistance, guidance, and help finding resources across a variety of issues for the wide demographic spectrum that comprises our city.” (Edmonds human services division statement)

The goal is to provide help for seniors, veterans, the disabled, families, children, COVID assistance to small business as well as the homeless and those in mental health crisis. The division also has five long-term motel vouchers for “emergency shelter.” The city has also relied on several churches for emergency shelter and will continue to partner with them.

In her presentation to the council, Deputy Parks Director Burley laid out the expectations:

The 2019 City Homeless Assessment reported that “Family crisis was the most frequent response when people who are homeless in Snohomish County were asked what contributed to them becoming homeless, despite a common perception that most people are homeless because they have behavioral health issues.”

The new human services plan notes that adding a social worker takes the city a step closer to being able to establish “a regional collaborative approach to serving South Snohomish County.” It’s a strategy first laid out in that 2019 homelessness study, which highlighted a regional response as well as preserving existing housing and preventing homelessness.

That frustrated neighbor who wrote about the homeless woman at the Urban Trailhead had a final thought: “The city is choosing and there is a lot of the focus on downtown, on an “Edmonds Kind of Day,” on Walkable Main Street and how big the trees are. (Homelessness) will be a massive issue for everyone here soon.”

That was echoed by Everett Community Development Director Julie Willie. “Small towns still have this mentality or desire to get rid of the homeless people. It actually is our problem,” she said.

37 Replies to “Addressing homelessness in Edmonds: ‘It actually is our problem’”