Against the backdrop of historically low interest rates, the Edmonds City Council at its Tuesday night business meeting agreed to support bond financing proposals that will save the city money, provide short-term cash relief for the Edmonds Public Facilities District that runs the Edmonds Center for the Arts (ECA), and fund a maintenance backlog in city buildings.

The council unanimously approved the Public Facilities District’s (PFD’s) request to pursue refinancing of district bonds issued by the city on behalf of the district in 2012. Bond refinancing will assist the ECA in its efforts to recover financially from the COVID-19 pandemic, said ECA Executive Director Joe McIalwain. He spoke — along with PDF board members — during the council’s Finance Committee held prior to the full council meeting. Since the district won’t be required to make a principal payment on the debt during the current fiscal year, the bnd refinancing “will free up a good amount of money,” McIalwain said.

A net positive cash flow beginning in 2021 will allow the PFD to pay down other components of its debt more quickly, which includes a direct loan from the city — approved in 2018 –– via First Financial Northwest Bank, McIalwain said. And it will give the facilities district the ability to begin setting aside money for soon-to-be needed capital improvements and replacements for the ECA building.

The council also agreeed to refinance $8.045 million in water and sewer revenue bonds, saving the city over a million dollars in the next 10 years, according to Administrative Services Director Dave Turley.

And it voted to issue new bonds for Civic Field construction to cover a $1.634 million funding gap — as well as $4.4 million to fund the city’s growing facilities maintenance backlog. The council discussed that backlog during both the finance committee and parks and public works committee meetings, as well as during the business meeting Tuesday night.

The discussion was a followup to a 2018 report on the condition of the city’s buildings, based on a study conducted by consultant Mckinstry. At that time, Public Works and Utilities Director Phil Williams said that the city had been underfunding required building maintenance for 20 years, and as a result had a deferred maintenance backlog of $6.5 million. That backlog is now estimated at $11 million.

While the city stepped up its capital renewal investments to $700,000 starting in 2019 and increased them to $1.5 million in 2020, the amount was reduced in 2021 because of the uncertain budget outlook due to the pandemic, Williams told the council Tuesday night. 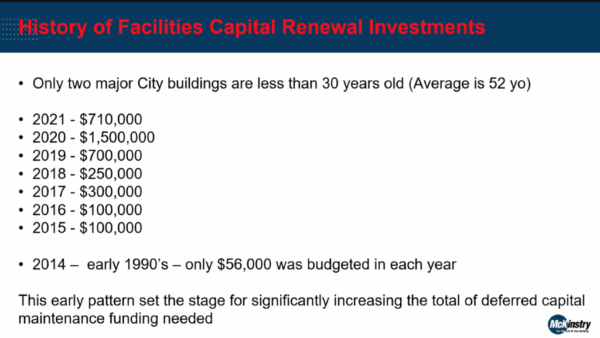 “Buildings are a little bit like people,” said Williams, who explained that the average age of the city’s buildings is 52 year old, and only two buildings are less than 30 years old. “If their life cycle time period is long enough, you don’t see it day to day. These are just things that accumulate over time.” For example, City Hall needs about $3 million worth of work, including electrical systems and plumbing. The building “was old when we bought it and had not had the maintenance that it needed up to that point,” he added. The Frances Anderson Center also needs improvements, including both new heating and cooling systems.

Addressing questions from councilmembers, Williams agreed that while the $4.4 million won’t address all of the estimated $11 million backlog, he noted that it will allow the city to make significant progress.

As for Civic Field, the estimated total cost of construction is $13.75 million, which is more than $1.6 million over budget due to site design challenges and increasing construction costs. The city council in 2017 approved a plan for redesigning the field, with the goal of transforming it into a downtown Edmonds park with range of amenities — among them, upgraded youth athletic fields and sports lighting, an inclusive playground, a walking path, a petanque court grove and a pollinator meadow.